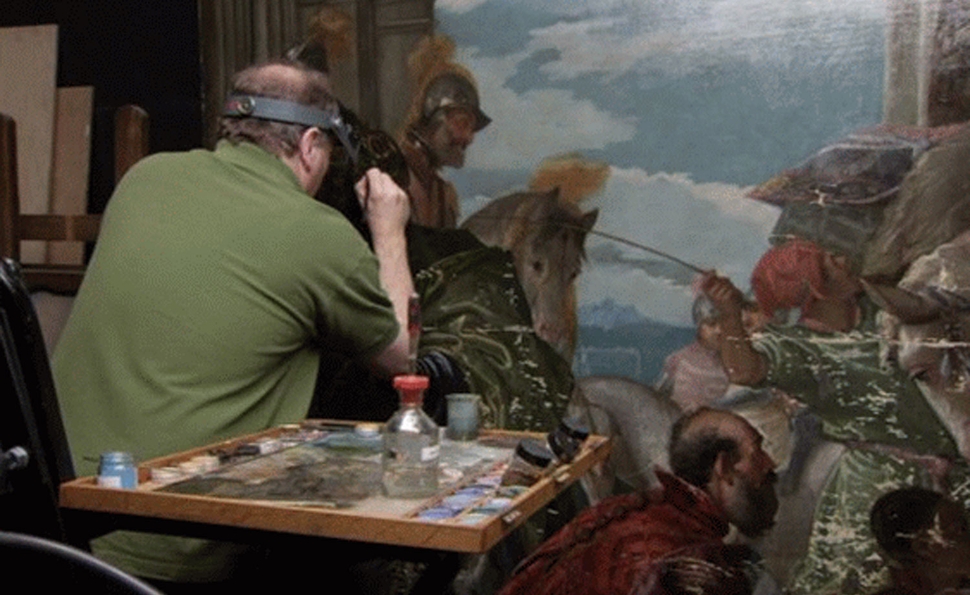 A veritable cathedral of Western paintings, the National Gallery has been entrenched in London’s Trafalgar Square since 1838, with access to the sprawling facility convenient (and mostly free) for the public to whom it belongs. But while the art technically belongs to the museum’s visitors, the guests can’t take it with them—like many of the world’s most famous collections of fine art, the National Gallery doesn’t allow photography. That fact, in and of itself, is enough to make Frederick’s Wiseman’s unrestricted, nearly three-hour portrait of the place significant. But the ultimate value of the famed filmmaker’s latest documentary—a subject National Gallery turns into a reflexive concern—is not that Wiseman makes it possible for a broader audience to see these priceless works of art, but that the scope of his project invites all audiences to look at them through an illuminating new lens.

From the moment the film begins by conflating the majesty of the museum’s paintings with the mundanity of its vacuum cleaners, it quickly becomes clear that the National Gallery is a fertile venue for one of Wiseman’s sketches. As is his wont when embedding himself inside an active institution, Wiseman portrays the National Gallery as a living organism, and he divides his interest almost equally between its most vital parts.

Providing a comprehensive cross-section of all that happens in the atriums, hallways, and back rooms of the fourth most visited museum in the world, National Gallery is told in long, patient, largely unbroken chunks. The 84-year-old Wiseman gloms on to a number of passionate lectures, serves as a fly on the wall in behind-the-scenes meetings, and lurks in the corner of figure-drawing classes (complete with restless nude models). As his acolytes have been conditioned to assume, Wiseman’s editing seldom draws explicit connections between his various points of focus. On the contrary, most of the segments are strictly segregated, each uninterrupted glimpse of the museum bridged by close-ups of the paintings themselves. The vast majority of the film’s cuts broaden, rather than limit, the scope of its inquiry—perhaps the most immediately telling evidence that National Gallery is top-drawer Wiseman. (There is another drawer, though it can be hard to find.)

Wiseman has always been compelled by deceptively autonomous systems and institutions—universities, hospitals, erotic revues—the kind of places the public takes for granted. On its most superficial level, National Gallery is a sobering depiction of the enormous human upkeep required to invisibly maintain the collection’s condition and identity. In addition to an army of custodians, Wiseman’s film shines light on the museum’s unidentified coterie of curators and administrators, who are tasked with promoting a collection of timeless artworks to a mercilessly modern world. (A memorable scene finds two staff members debating whether it would be vulgar for the Gallery to serve as the finish line for the London Marathon—an amusing conversation, but one fueled by professional urgency.) The film’s bureaucratic intrigue isn’t allowed to cohere into the kind of full-bodied drama that made Wiseman’s 2013 film At Berkeley so compelling, but at the very least, National Gallery should convince viewers to actually pay the “suggested admission” during their next museum visit, wherever that museum might be.

Wiseman’s films invariably call attention to each other, but National Gallery is one of the few that calls attention to itself. That isn’t to say that Wiseman has suddenly decided to abandon his signature detachment in favor of becoming an octogenarian Morgan Spurlock. It’s just that a documentary about the preservation and presentation of art was always going to confront the fundamental tension at the heart of Wiseman’s work, between images and their representations. The carefully modulated flatness of his movies makes it easy (and fun) to spot patterns and feel out the key ideas bubbling up to the surface, and National Gallery so repeatedly returns to the relationship between artworks and their audiences that the subject begins to feel like the chorus of a very long song, or the leitmotif of a medium-length opera.

As the film goes on, the rhythmically cut montages of paintings that separate the scenes begin to feel less like palate-cleansers than like a vague demonstration of the Kuleshov Effect: The content of the scenes they follow colors how viewers look at them. After a fascinating bit about canvas restoration, the paintings in the transitional montage seem impure. After a bit wherein an unrelated video crew is seen shooting a piece about J.M.W. Turner—a sequence during which museum heads give talking-head interviews for the documentary within the documentary, slyly violating the most ironclad rule of Wiseman’s style—the dolly shots with which they approach the art invite audiences to question the reverence of Wiseman’s unyielding series of close-ups. Wiseman has made a career of restoring narratives to places (physical or otherwise) that might otherwise be impenetrable, but his hand in shaping that narrative is more transparent in National Gallery than it has been in the past.

At one point, a museum employee refers to one of the Gallery’s da Vinci exhibit paintings as “a wonderful mixture of observation and imagination.” That description applies to Wiseman’s work, too. It’s a stretch to say National Gallery resolves as a self-portrait, but the film doesn’t just clarify the importance of that mix as it appears in Wiseman’s documentaries. It also emphasizes how the future of his work hinges on the impossibility of maintaining a consistent balance between the two elements that comprise it.