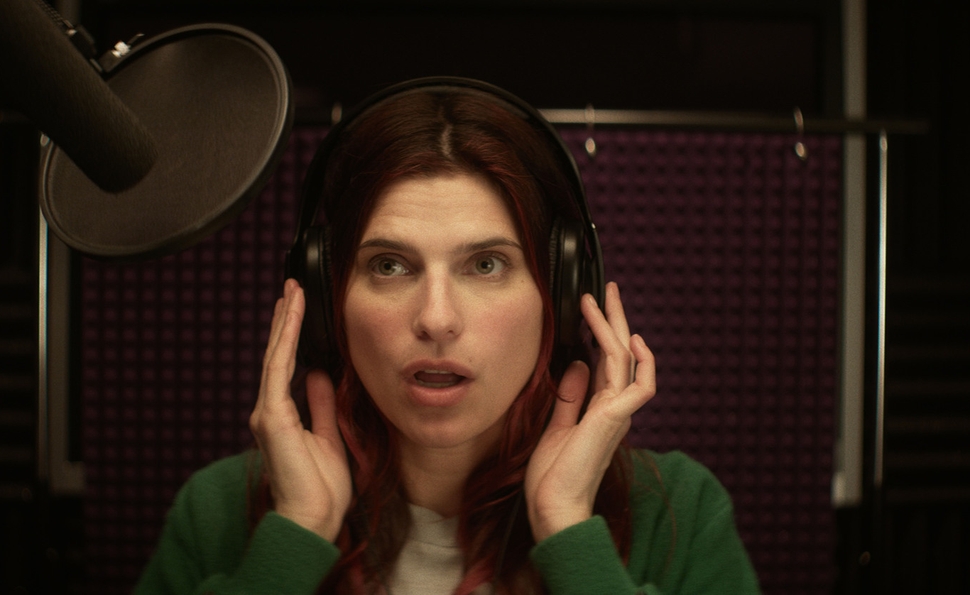 For a few years, when Lake Bell was a few names deep on the cast list for romantic comedies like Over Her Dead Body and No Strings Attached, she seemed to be off making her own, much livelier comedy on the sidelines. Bell’s height makes her a standout in most circumstances, she has a big, expressive face, and she finesses her dialogue readings in offbeat, unpredictable ways. It makes sense that she plays an aspiring voiceover artist in her directorial debut, In A World…, because she has the elasticity and range to hit on many different registers. The film is often a rough, searching, unfocused piece of work, but at a minimum, it affirms Bell as a talent to watch both as an actress and a writer-director, one with a strong, developing comedic sensibility.

After 11 years spent in the character-actor trenches, In A World… also gives Bell a chance to take pointed shots at a male-dominated industry—here, an almost exclusively male subset of the film industry. Bell stars as Carol, a struggling voice coach who still lives at home with her father Sam (Fred Melamed), a near-legendary voiceover artist whose work on movie trailers isn’t an inspiration so much as a constant reminder of her limitations. (And if that doesn’t do it, Sam is happy to put her down himself.) After dad invites his much younger girlfriend (Alexandra Holden) to move in, Carol convinces her sister Dani (Michaela Watkins) and her brother-in-law Moe (Rob Corddry) to let her stay in their cramped apartment, but she’s going from one domestic crisis to another. Carol catches a professional break, however, when a major studio decides to bring back “In a world…,” the trailer lead-in phrase popularized by the late Don LaFontaine, and she has the opportunity to submit an audition. Her competition includes an extravagantly egotistical up-and-comer (Ken Marino) and, naturally, her dad.

Demetri Martin, Nick Offerman, and Tig Notaro round out the cast as a motley crew of engineers and sound recordists, and they add warmth and color (and in Martin’s case, a love interest) to a film that spreads laughs across the ensemble. Bell’s recent history as a cog in much larger comic machines—as a supporting player in rom-coms or as a regular on Childrens Hospital—appears to have inspired her to make every little role count, and her generosity encourages goodwill from the audience. The trouble with this approach is that In A World… sometimes feels like the setup for a really good TV show that’s doomed to be cancelled after the pilot: Corddry and Watkins, for example, are excellent as a couple that feuds over slights both petty and serious, but Bell’s decision to take time away from her own character sacrifices depth for breadth. Without strong thematic threads connecting the subplots, it becomes a movie where a bunch of stuff happens, only half-cohering as feminist comedy, dysfunctional family drama, and daffy love story.

Still, In A World… has a scruffy charm that’s ultimately disarming and persuasive, and the sheer novelty of the voiceover culture Bell explores, with its hilarious pomposities and tribalism, takes the film a long way. In A World… goes inside the trailer-making sausage factory, but it has deeper insight into how people’s voices are a tool that can empower or weaken them; Carol offers techniques to help Eva Longoria with her Cockney accent, but she’s more often of service to women whose unfortunate coos prevent them from being taken seriously. Bell could not have picked a better field for a story about a woman finding her voice in a man’s world—trailer narration is close to 100-percent male—and she complicates Carol’s plight with a bold third-act twist that upsets the feel-good mood. It’s a perfectly messy close to a rough, shambling, winning debut feature that promises something better down the road.