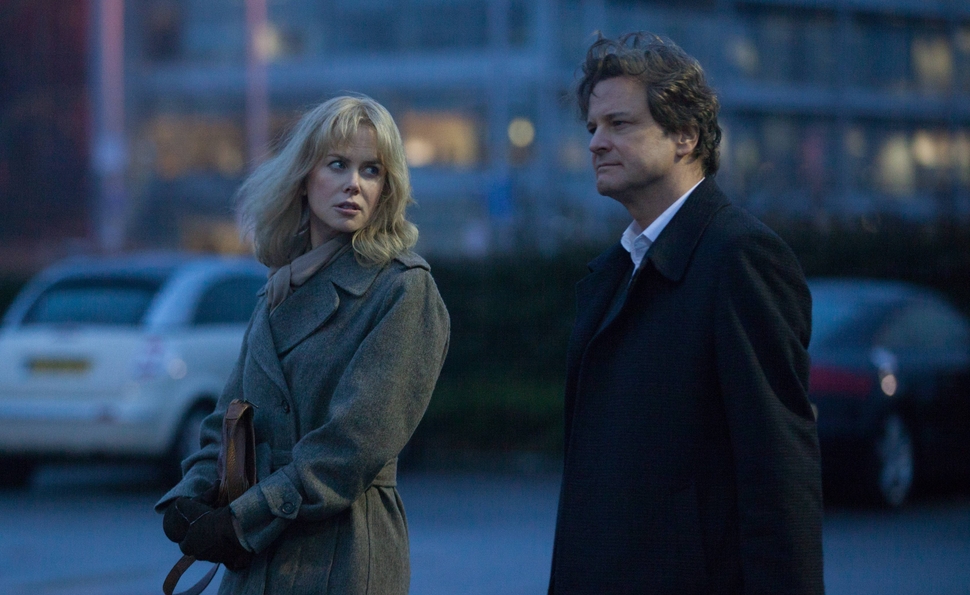 Before I Go To Sleep

Twist cinema at its most brainless, Rowan Joffé’s blunt-force thriller Before I Go To Sleep appears to have forgotten that films about amnesia don’t render the audience incapable of recalling what’s happened from one scene to the next. A shameless, mostly sanitized rip-off of better genre offerings like Memento and Diabolically Yours, Before I Go To Sleep imagines, soap-opera-style, that simply thinking really hard and occasionally being jolted by gruesome pictures can reverse rare forms of amnesia.

Amnesiac Christine (Nicole Kidman) is greeted every morning with a complete inability to remember the last 20 years of her life. A bathroom-set wall collage doesn’t appear to have been made to jog her memory, but simply to reaffirm what her beleaguered, weary husband Ben (Colin Firth) has to explain to her every morning before breakfast. Bright Post-It Notes mark off certain sections grouped by theme: “BEN,” “OUR WEDDING,” “YOUR HUSBAND BEN.” It seems rudimentary and ridiculous that Christine’s first line in the film is in the form of a question to Ben (“Who are you?”) and that he’s forced to respond in the most obvious way imaginable (“I’m your husband, Ben”). But the woman has suffered a head injury and distrusts pictures and Post-It Notes, so who could blame her?

The head injury has robbed Christine of decades of memories, but the ever-attentive Ben does his best both to soothe her and explain the way their life works now. There are lists and reminders, and oh, it’s time for Ben to go to work now, so have a nice day, you lovely, memory-less creature. Kidman looks suitably befuddled throughout the film, dazedly walking around in a wardrobe that appears to consist entirely of robes and sensible knits. Even when the seemingly kind Dr. Nasch (Mark Strong) rings her up so they can continue to chat about her memory—we do this every day, and of course you don’t remember! I’ll come pick you up in five!—Kidman’s expression and performance rarely changes. She’s flummoxed, but that isn’t exactly the stuff of a compelling feature film.

Once revealed, Christine’s fears and concerns are scattershot but not exactly far-ranging; she expresses consistent dissatisfaction with her seemingly overnight aging (in Christine’s mind, she’s still in her early 20s, and Joffé’s camera lingers over Kidman’s hands, one of the few body parts that even remotely expresses her age), but she never asks about world events or where her parents are. As the film unfolds, Christine and Dr. Nasch cast about for purpose (narrative and otherwise), flitting between various motivations with the attention span of a pair of especially stupid gnats. What is most important for Christine? To uncover what happened to her? To get Ben to tell the truth about their family? To determine her true feelings for her husband? Ben is left purposely opaque for the majority of the film, and Firth adeptly walks the line between concerned husband and overly involved stranger, making Christine’s worries feel unfounded and plain old paranoid.

Dr. Nasch kits Christine out with a digital camera, meant to serve as a visual diary she can watch every day in the hope that something sparks her memory. But Before I Go To Sleep vacillates so wildly between aims and issues that the conceit seems worthless. Maybe there’s actually nothing nefarious going on. Maybe Christine is just an amnesiac with too much time on her hands. Perhaps to pump up the drama during its more lax moments, Joffé piles on a series of useless jump scares that equate to someone leaping out from behind a tree and screaming “LOUD NOISES!” A second-act red herring carries no weight, and it feels unearned and sloppy even when it’s still pretending to serve as the film’s big reveal.

Before I Go To Sleep does eventually boast a hell of a twist, one that’s genuinely surprising for such an otherwise paint-by-numbers genre film, but the script is unable to back up its bravado or fill in the most minor gaps. The film hangs some of its most important revelations and key sequences on weak contrivances, from bad Photoshop to a sprawling airport hotel that’s apparently both understaffed and mostly guest-free. This is a film about memory, but Joffé has created a storyline that requires a brain injury to enjoy. It’s best left forgotten.

GoWatchIt: Buy. Rent. Stream Before I Go To Sleep