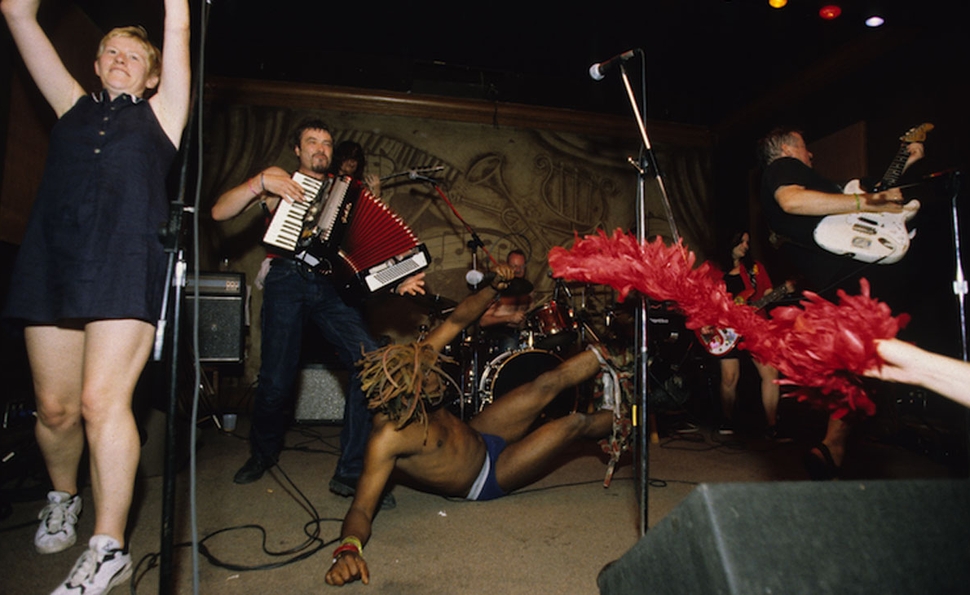 Revenge Of The Mekons

Back when The Mekons were still punk-rockers, with a reputation for being eccentric and incendiary, they headlined a nightclub gig opened by a young band named U2. In Joe Angio’s documentary Revenge Of The Mekons, Mekons stalwart Jon Langford talks about his bemusement at seeing U2 frontman Bono get a pep talk from his manager before storming the small stage in a small club and doing all the poses and moves he’d be doing in arenas in just a few years. Langford doesn’t tell this story to make fun of Bono (well, not only to make fun of him), but to illustrate what punk meant to The Mekons. The whole idea, in Langford’s mind, was not to act like rock stars onstage, but to be more like a group of friends sharing what they made with another group of friends. Or, as Langford says at the end of Revenge Of The Mekons, “The way you did it is as important as what you did.”

Angio’s approach to The Mekons’ history holds to that ethos, for the most part. Revenge Of The Mekons has none of the raggedness of the band’s best songs, and the movie only occasionally gets to that very Mekons place that novelist Jonathan Franzen describes in the film, where despair and rage over the world’s pervasive injustice resolves into something blackly humorous, and even triumphant. But Angio hasn’t made a glancing, broadly outlined fan-doc, either. Revenge Of The Mekons spends time with the band’s scattered members—current and retired—and honestly asks how they pay the bills between making poor-selling records and embarking on underattended tours. Angio has rounded up an impressive slate of critics, fellow travelers, and famous fans, who talk about what The Mekons mean. Writer and critic Luc Sante hails the band’s members for finding honest ways to make a living that haven’t required them to turn into “a commodity.” Filmmaker Mary Harron recalls her early days writing about the punk scenes in England in New York, and how she admired The Mekons’ “amateur night meets the avant-garde” aesthetic, but couldn’t figure out how they could ever turn that into a career.

Between those interviews and the current slice-of-life scenes—which include lots of footage of the band playing shows, writing, and recording—Revenge Of The Mekons periodically returns to tracing The Mekons’ path. Formed in Leeds in 1977, the group was part of an arty, politically engaged local punk scene that included Gang Of Four, whose instruments Mekons members used to borrow. The band was the first of its crowd to get a record deal, with Virgin, a label then riding the wave of publicity from signing Sex Pistols. Virgin never really got The Mekons, which became a pattern of the band: joining big-time labels that failed to grasp or sell the music. Meanwhile, The Mekons quickly evolved from agit-punk to joltingly experimental post-punk, and after disbanding for a couple of years in the early 1980s, it returned as a boozy, angry, working-class roots-rock band, which is mostly the mode it’s stayed in ever since, aside from the occasional art-piece. These men and women who started out yelling their way through smart, noisy songs like “32 Weeks”—a detailed breakdown of how long people have to work to buy basic products from a mattress to whiskey—now write more quiet, acoustic material, but are still living the ideals they sing about.

That’s what makes Revenge Of The Mekons so stirring. Over and over, the band members get asked how they’ve stayed active for more than 35 years, when their albums have rarely sold above four figures. Angio answers in a roundabout way. It’s one thing to hear Mekons singer Sally Timms joke about how they’ve stayed partners because there’s never been enough money to fight over, or to hear Langford say that the lack of interest has been freeing. It’s something else entirely to see The Mekons, gathering in a country house to make a new record and sharing meals between songs. They look no different than any neighborhood church choir, eating pot-luck and rehearsing next Sunday’s offertory hymn. This is rock ’n’ roll as Langford envisioned it in the late 1970s, and it’s heartening to see how he and his friends have continued to make the rock lifestyle mean what they’ve needed it to mean, both in their 20s and in their 50s.