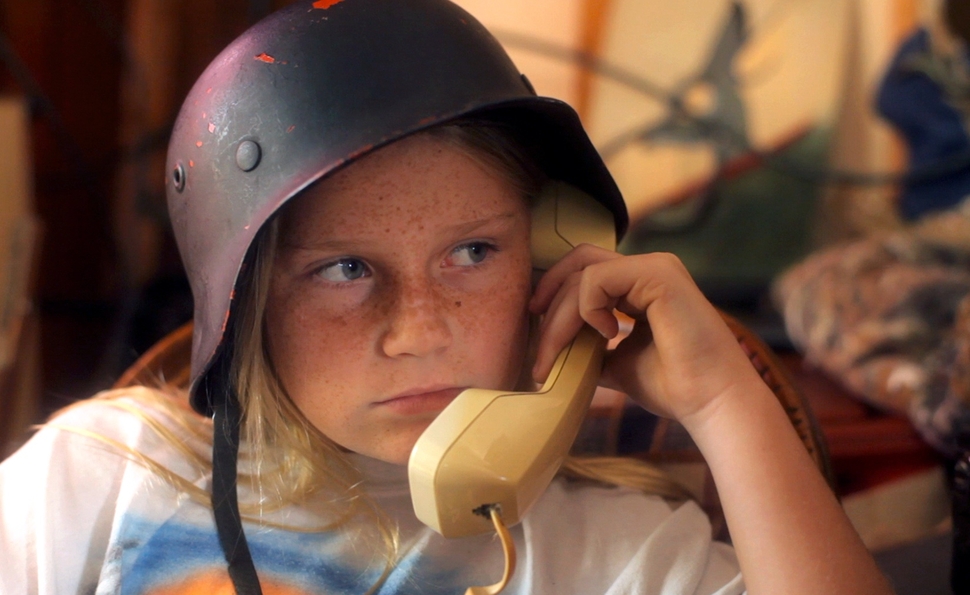 At a nice-looking playground in a pleasant Texas suburb, one little girl warns her friends not to go down the big slide: “Some kid peed on it.” Surly, freckle-faced, golden-haired, pre-teen tomboy Annie (played by Sydney Aguirre) isn’t the urinator in question, but she sure could be. Largely left alone by her packrat single dad Marvin (Nathan Zellner), Annie spends her days drawing pictures of mayhem in her notebook, then carving a path of destruction from her father’s cluttered goat farm to the nicer neighborhoods just a few miles down the road. She finds abandoned old toilets and bashes them with an aluminum bat, then shoves them down a concrete embankment. She shoplifts biscuit dough so she can hurl hunks at passing cars. And when she shows up at that rich-kid playground, the rainbow-attired children shout at her to go away, so she throws handfuls of gravel through the holes in their plastic tunnels. She’s always ready to ruin people’s days.

Acting-writing-directing-producing brothers David and Nathan Zellner have been building a strong reputation in the independent-film community with their eccentric shorts, which dwell at the intersection of John Waters, David Lynch, Wes Anderson, and David Gordon Green. In the Zellners’ elliptical, deadpan art-comedy Kid-Thing, the brothers try as long as possible to avoid maneuvering their heroine into anything like a plot. Instead, Kid-Thing is more like a 1960s-style pastoral youth movie with a serrated edge. Between showing Annie exploring her single father’s house of wonders (where she might find a gas mask, or an old paperback full of facts about AIDS) and shooting paintballs at piles of cow shit, Kid-Thing indulges in eccentric digressions, such as one long take of Marvin scratching off lottery tickets with his brother (played by David Zellner), and a scene of Annie listening to a blind, one-legged, dwarf guitarist imitate the sound of a record playing backward. This movie is, at times, aggressively odd.

Then one day in the woods, Annie hears a cry for help, and discovers a woman named Esther (Susan Tyrrell, in her final role) stuck at the bottom of a deep pit. Annie debates whether she should try and help the old lady out or just let her rot, because it isn’t in this girl’s nature to show compassion. She’s more the type who comes upon a girl in a wheelchair having a birthday party, and decides to smash the cake with a baseball bat and steal one of the presents. Even when her father tries to teach her about the unconditional love of animals—which he does by showing her how to hypnotize a chicken with a chalk-mark—she growls, “The only reason I love you is because you’re a source of food.” (And she isn’t just talking to the chicken.) But after she meets Esther, Annie makes sandwiches for the trapped old lady—by plopping literal fistfuls of peanut butter and jelly onto white bread—and starts asking her dwarf friend whether he ever thinks about the choices he makes.

The Zellners approach the development of Kid-Thing’s themes about as diligently as Annie handles her development of a conscience—which is to say, haphazardly, and incidental to the more important business of squishing insects and banging on stuff with a big stick. Kid-Thing’s exaggerated, cartoony aspects are frustrating at times, as are the long stretches of forced artiness. (Why must the girl in the wheelchair remain completely still and silent as Annie destroys her party? Why open the film with so many long shots of a demolition derby?) But the images in Kid-Thing are frequently stunning, as the brothers linger over the rainbow colors of soda and slush machines, and strive to capture something profound about the inherent sadness of childhood, reflected in the sad flicker of an off-brand console videogame. Beneath the affectations, there’s poetry in Kid-Thing, and truth in its depiction of how absolute freedom can be a kind of trap.