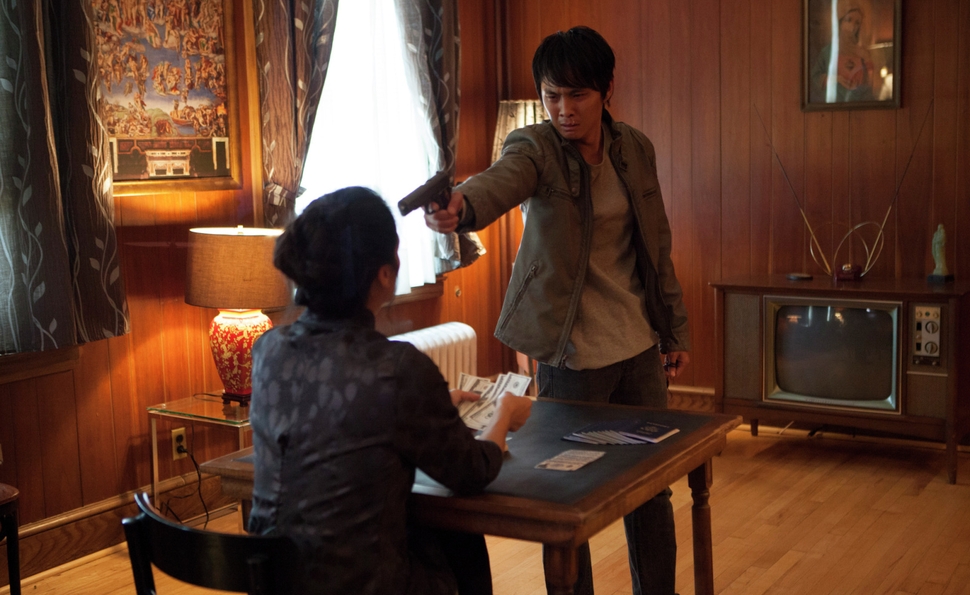 Revenge Of The Green Dragons

Eight years ago, director Martin Scorsese adapted Andrew Lau’s 2002 Hong Kong thriller Infernal Affairs into The Departed and won the Best Picture Oscar that had eluded him for decades. Now Lau, along with co-director Andrew Loo, has returned the favor with Revenge Of The Green Dragons, a Scorsese-produced gangster drama that could be described as a Chinese GoodFellas or Gangs Of New York, at least by the excessively generous. It’s the type of immigrant story that’s compelled Scorsese himself throughout his career: How do first- or second-generation immigrants find their way in a country that greets them with hostility and suspicion? And what are the often-violent codes and rituals that govern their insular communities? But in Lau and Loo’s telling, the off-the-boat indoctrination of young, undocumented Chinese families into vicious gangsterism is overstated and cartoonish, like The Warriors trying to pass itself off as a docudrama.

As with GoodFellas, Revenge Of The Green Dragons leans on an antihero’s voiceover to describe the parameters of its criminal underworld, but the irony and wit that peppered Ray Liotta’s narration in the Scorsese film is replaced here by tough-guy poses and poetic language. The situation itself is fascinating: In the early-to-mid-1980s, a warehouse in Flushing, Queens serves as an unofficial Ellis Island, serving incoming Chinese families with fake passports and exploitative opportunities. The narrator is Sonny (Justin Chon) and his best friend is Steven (Kevin Wu, best known to YouTube users as “KevJumba”), who both land in America as scared pre-adolescents and grow up to be vicious gangsters. Steven nearly loses his life when the Green Dragons, the most powerful of Flushing’s six gangs, abduct him from school and beat him to an inch of his life. But their leader Paul (Harry Shum Jr.) intervenes, taking both Sonny and Steven under his wing and teaching them to shoot guns, do collections, and generally act like soulless, mirthless, morally vacant killers. Meanwhile, a racist FBI agent (Ray Liotta) makes it his mission to stop all this criminality his betters have been ignoring.

In broad strokes, Revenge Of The Green Dragons has the makings of a compelling thriller, a fact-inspired story about a community so divorced from the American legal and labor system that it may as well be another country entirely. (The #1 rule: Never kill a white person, lest other white people start giving a damn.) But that’s the problem with Revenge Of The Green Dragons: It’s all broad strokes. It’s hard to buy the authenticity of this specific milieu when Loo and Lau have borrowed so liberally from sources like GoodFellas, because they’re essentially dressing it in one-size-fits-all gangster-movie clothes. There’s also an unfortunate distance between the film’s assertion that this really happened and the type of hyperbolic violence that wouldn’t be out of place in a second-rate exploitation movie.

For all its slip-ups and incoherency, however, there’s something compelling about the film’s attempt to look at the immigrant experience by cross-breeding the traditions of Hong Kong and American gangster movies. Working almost entirely in the English language, Loo and Lau have an off-kilter impression of America that’s occasionally resonant, particularly in the film’s view of a country that forges its winners through violence. There’s a much better movie lurking within Revenge Of The Green Dragons about this rite of passage and how it bleeds, literally, across the invisible borders within a new country. Loo and Lau don’t come close to finding it.