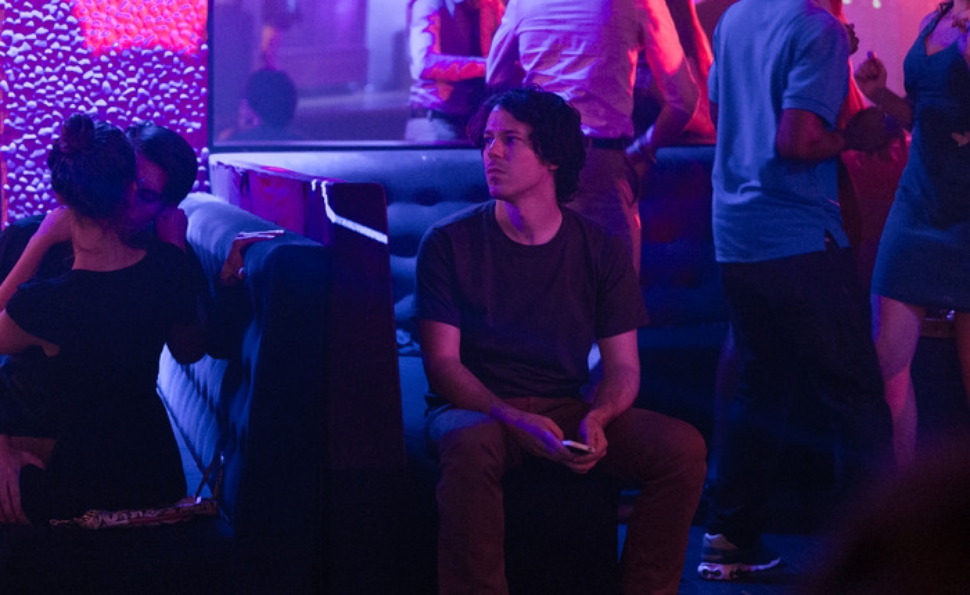 Obsession is the landscape of Zachary Wigon’s feature debut, The Heart Machine—obsession so acute, it obliterates everything in its path. Obsession has its own rules and logic, and it isolates those in its grip. Vision narrows to a pinhole. At its best, the film re-creates that state of mind, helped by a tremendously unnerving performance from John Gallagher Jr. The Heart Machine resists the impulse to make a statement about How We Live Now, despite its storyline about online dating and intimacy via Skype calls. It isn’t about the dangers of the Internet, or “catfishing,” or the supposed unreality of online relationships. Reminiscent of Vertigo in many ways, with shades of Blow Out and The Conversation, the film operates in the airless bell-jar world of a man convinced there’s more going on than meets the eye. Except for its ending, which deflates the tension and makes a brief gesture toward profundity, it’s an unblinking look at one man’s total unraveling.

Cody (Gallagher) is first seen huddled over his phone in a nightclub, surrounded by writhing dancers. Later, back home, he signs on to his computer for a conversation with a woman named Virginia (Kate Lyn Sheil). From the tone—tender and sweet, humorous and intimate—it’s clear they are fully enmeshed in each other’s lives. She’s in Berlin on a six-month writing retreat; he lives in New York. They haven’t met yet, but they’ve been Skyping for months, and both nervously look forward to her eventual return to New York, when they can finally meet in person. Both express relief at having found someone so nice, so simpatico, in the wilderness of the New York dating scene.

Wigon (who also scripted) withholds a lot from the initial presentation, and The Heart Machine works on a slow reveal, providing snippets of further information through fragments of behavior and what appear to be flashbacks, presented as though they could be current, adding to the disorientation. One day, on the train into Manhattan from his home in Bushwick, Cody sees a girl reading a book, and takes a closer look. Later that night, Skyping with Virginia in Berlin, he says to her, laughing, “Hey, it’s so weird, but I saw your doppelgänger today on the train!” Virginia doesn’t appear that interested in the story and changes the subject.

So Cody suspects Virginia isn’t in Berlin at all, and never was, that she’s lying to him for some reason. He pins a collage of “clues” up on his closet wall—subway maps and marked-up street maps—looking like a homicide detective working a case, or a serial killer tracking his next victim. He analyzes the background noises in her Skype messages, isolating barking dogs or the sound of sirens, pulling up sound clips of German ambulances to compare. He takes close-up screengrabs of her electrical outlets in the background—outlets that appear suspiciously American. He neglects his freelance writing work and haunts the streets of what he has deduced is her neighborhood (via her photos on Facebook), asking people if they know her, or have seen her recently. Cody, in other words, starts to seem totally unhinged.

There are stressful, excruciating scenes where he weasels his way into her peripheral life, chatting up a guy who works at a coffee shop in her neighborhood, manufacturing reasons to keep the conversation going, or, worse, attempting to hook up with someone who’s Virginia’s friend on Facebook. His intensity puts people off. Cody seems like a nice guy, but his behavior throughout The Heart Machine isn’t nice at all. Gallagher is brilliant at suggesting that Cody knows he should stop this madness, knows he is freaking people out, knows he should just ask her what the deal is, but he can’t stop. The girls he hooks up with are all Virginia doppelgängers, all with long, straight brown hair and similar features. His dates lose their distinguishing characteristics, taking on a monolithic sameness.

Traveling on what appears to be a contemporaneous track, although Wigon eschews a linear structure, Virginia circulates through New York, seeking sexual hookups via Craigslist or Blendr, finding it all depressing. Sheil does an amazing job of creating a character perceived mainly through Cody’s eyes. She’s warm and sweet over Skype, yet that doesn’t match the glimpses given elsewhere when she is alone. Is she even real? Has Cody just made her up? What is she up to?

The Heart Machine is stylish and effective, aided by Rob Leitzell’s moody cinematography. It’s a wonderful New York film, showing the city in its diverse moods, its jostling humanity, its empty dawn sky, the strange no-man’s-land of subway tunnels at night, and the free-for-all feeling of the East Village at 1 in the morning. There are a couple of eye-catching almost 180-degree panning shots, from Cody’s point of view, as he looks up and down a street, or around an unfamiliar apartment. The camera picks up nothingness, just the intervening walls, dizzying as they spread out before him. Cody can’t see what’s at the end of that street, or that wall, but his eye must follow. There’s no other way out.

The Heart Machine doesn’t fully hold together as the truth starts emerging. The tension, so uncomfortable throughout, evaporates. Cody says at one point that it’s weird to have not met Virginia yet, to have “so many feelings tied up in something so far away.” The sense of distance, not just geographical, but emotional and psychological, creates a mindset of frightening isolation and paranoia. That’s where The Heart Machine has its greatest impact.