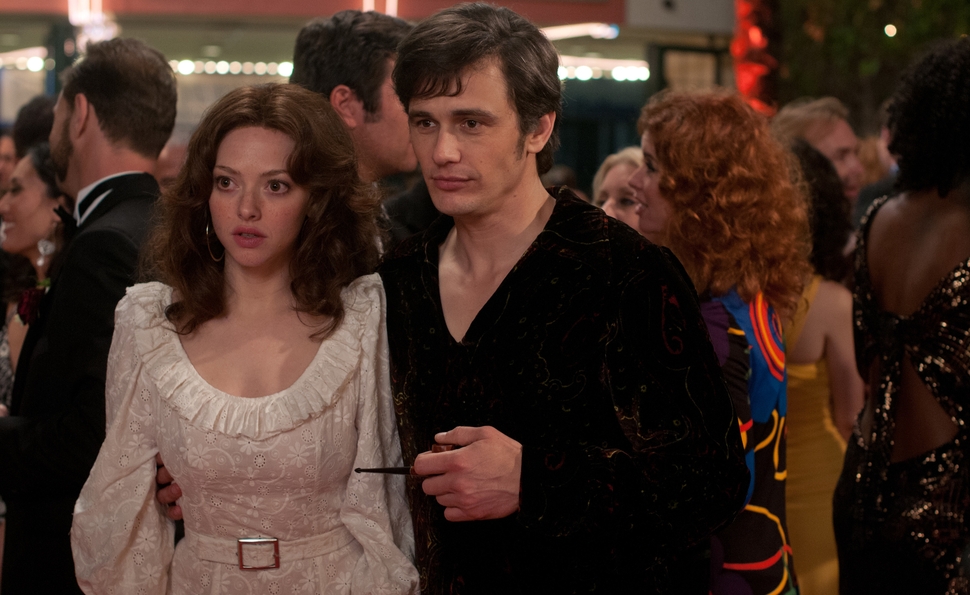 Paul Thomas Anderson’s brilliant, influential Boogie Nights casts a long shadow over any subsequent films about the vibrant, exhilarating, and inevitably awful world of adult film. Seemingly every film about pornography after Boogie Nights has borrowed the cornerstones of its visual style. Over the past 15 years, its sweeping camera moves, ripe sensuality, K-Tel-ready soundtrack of period hits, and outrageous wardrobe have become ubiquitous in films about X-rated movies. So have its swings between the giddy highs of discovering a liberated world of money and sex, and the agonizing lows that come with a seedy institution built on exploitation.

The biopic Lovelace, by documentarians turned narrative filmmakers Rob Epstein and Jeffrey Friedman (Howl), consequently deserves credit both for what it is and what it isn’t. It’s the rare behind-the-scenes porn movie that isn’t nakedly derivative of Boogie Nights, though it similarly oscillates between ecstatic highs and nightmarish lows. But it’s less about the industry than about the toxic relationship that briefly provided it with its biggest star. Lovelace distinguishes itself in part through through structural ingenuity. The film’s wrenching second half revisits events from the first half from a much darker, more probing angle, unearthing the violence and rage lurking just underneath the surface of even the film’s most upbeat sequences. Lovelace finds a fresh take on familiar material, but the film is also distinguished by its focus and intensity.

An ideally cast Amanda Seyfried stars as Linda Boreman, a repressed Catholic girl whose sleepy existence changes when she meets Chuck Traynor (Peter Sarsgaard), a small-time hustler who breaks through her formidable defenses and exposes her to a new world of uninhibited sensuality. Traynor is a one-man sexual revolution who charms, cajoles, and threatens Boreman into marrying him, and then into a life in the sex trade. Under the nom de porn “Linda Lovelace,” Boreman became instantly famous when 1972’s Deep Throat was an unlikely smash that pushed pornography from the seedy fringes to the mainstream. But the film’s success came at a steep price for the unhappy couple. Traynor’s brittle ego would not accept being the man behind the woman, and his anger and resentment toward her rose in proportion to her escalating fame.

Rather than follow the Boogie Nights template, Lovelace evokes Bob Fosse’s thematically similar Star 80 in its intimate take on the partnership between a violent hustler and the naïve, suggestible woman he feels the need to abuse and control. Lovelace even nods to Star 80 by casting its star, Eric Roberts, as the man who administers a lie-detector test to Lovelace to prove the validity of her hotly contested 1980 tell-all Ordeal.

Lovelace’s tricky structure breathes new life into musty, sordid material, but it also leaves it without much of an ending. Lovelace skips from the dark times to Boreman’s public reinvention as an anti-pornography activist and author without bothering to connect the dots. The film subsequently feels incomplete and misshapen, like a book with 20 pages ripped out of the climax. But while Lovelace ends with a shrug, it nevertheless resonates as a compelling character study of a woman who paradoxically came to personify sexual freedom while living in a state of borderline sexual slavery. In that respect, the film comes off as a much-needed corrective to the 2005 documentary Inside Deep Throat, which offered a fizzy, upbeat take on the making of Deep Throat and the film’s strange afterlife. Boreman’s pain was fatally missing from Inside Deep Throat, and that quality helps make Lovelace queasily compelling.