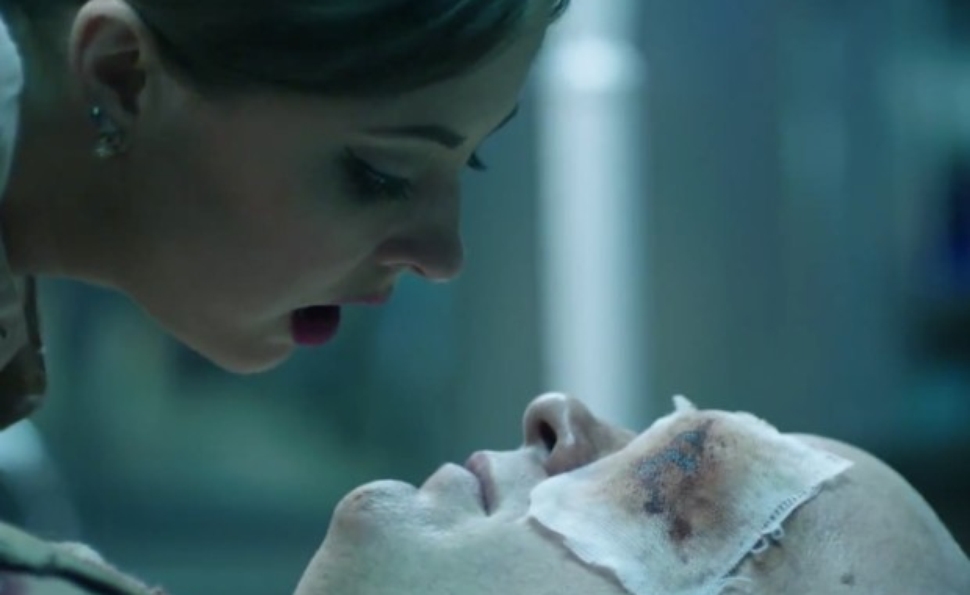 Jen and Sylvia Soska’s 2012 film American Mary was one of the most creative, distinctive horror movies of recent years: a wince-inducing, visually inventive film about an amateur plastic surgeon (well-played by Katharine Isabelle) who performs extreme body modifications on wealthy clients while using her money and skills to exact revenge on her enemies. The Soskas’ cult success with American Mary won them a higher-profile assignment, directing the sequel to the WWE’s 2006 slasher picture See No Evil—and they’ve brought Isabelle along with them, to play an oversexed party girl named Tamara with a serial-killer fetish. But the Soskas didn’t write See No Evil 2, and aside from a few fun kinks (including Isabelle’s performance), the movie plays as a fleetingly stylish but mostly generic maniac-on-the-loose movie. So how should American Mary fans feel about this?  Should they be disappointed that there’s so little of the Soska sisters’ personality in See No Evil 2, or remain hopeful that it’s a stepping-stone to bigger and stranger projects?

The first See No Evil starred pro wrestler Kane (born Glenn Jacobs) as Jacob Goodnight, a hulking murderer who follows in the footsteps of his fanatically religious mother by gouging out his victims’ eyes. The first film stuck with the Halloween formula, bringing a bunch of horny kids together in a confined space so Jacob could hack away. See No Evil 2 follows the Halloween II formula, taking place in the hospital where Jacob’s victims—and Jacob’s “corpse”—are taken. When Jacob inevitably rises from the dead, he finds another group of young people waiting to be killed. Tamara and the other friends of a morgue attendant named Amy (played by Danielle Harris, veteran of both Rob Zombie’s Halloween films) force her to celebrate her birthday at work, treating the hacked-up bodies around them as freaky party decorations.

See No Evil 2’s script—credited to Nathan Brookes and Bobby Lee Darby—spends an awful lot of time on setup, very little of it Jacob-related. Roughly the first 20 minutes of the movie are all about Amy’s tentative, tedious flirtation with her nice-guy co-worker Seth (Kaj-Erik Eriksen), and how it roils her overprotective brother Will (Greyston Holt), who thinks she’s wasting her life among the dead and the unambitious. Then Jacob disappears from his gurney, and from there, See No Evil 2 becomes a slasher that’s solidly made, decently acted, and attractively shot—but utterly predictable. Kane once again makes for a physically imposing monster, and the Soskas set up some decent kills, with a good mix of practical and digital effects, but the only real twist on the genre here is that it ends with a “final boy” instead of a “final girl.”

Then again, because the final standoff is between Jacob and a man, the meat of the movie is missing Isabelle, who’s easily See No Evil 2’s MVP. Her Tamara is the rare horror-movie wild-card who isn’t shrill and aggravating, because even though she’s the kind of self-centered hedonist who gets people killed, she’s also funny, and not intentionally malicious. Isabelle puts a little wink into the role, reacting to mortal danger more like a thinking person than a movie character. (When Seth suggests she duck behind some rolling metal shelves to elude Jacob, Tamara maintains her panicked whimper, but also says, “This is a terrible hiding spot!”)

Isabelle is the star of See No Evil 2’s most Soska-esque scene, when Tamara straddles what she assumes to be Jacob’s dead body, leaning into his face and cooing, while her unbuttoned blouse is rendered semi-transparent by the lights behind her. This is what the movie could use a lot more of: a memorably kinky tableau, playing with sex, death, and gender roles. If nothing else, the few moments like this in the film are signs that the Soskas really were behind the camera for See No Evil 2, even if they were focused more on serving the material than on making it their own.

The three short featurettes on the See No Evil 2 Blu-ray include a nifty item about the gore effects, and a shallow salute to Kane and his character. But Soska-philes will most appreciate a 10-minute documentary about the “Twisted Twins.” Not only does the featurette fill in some of the Soskas’ background and filmmaking philosophy, it also indicates that Lionsgate and WWE know the sisters are a selling point. And that’s good, because the more the Soskas become a brand, the more it’s likely that they’ll get to make another movie as good as American Mary.