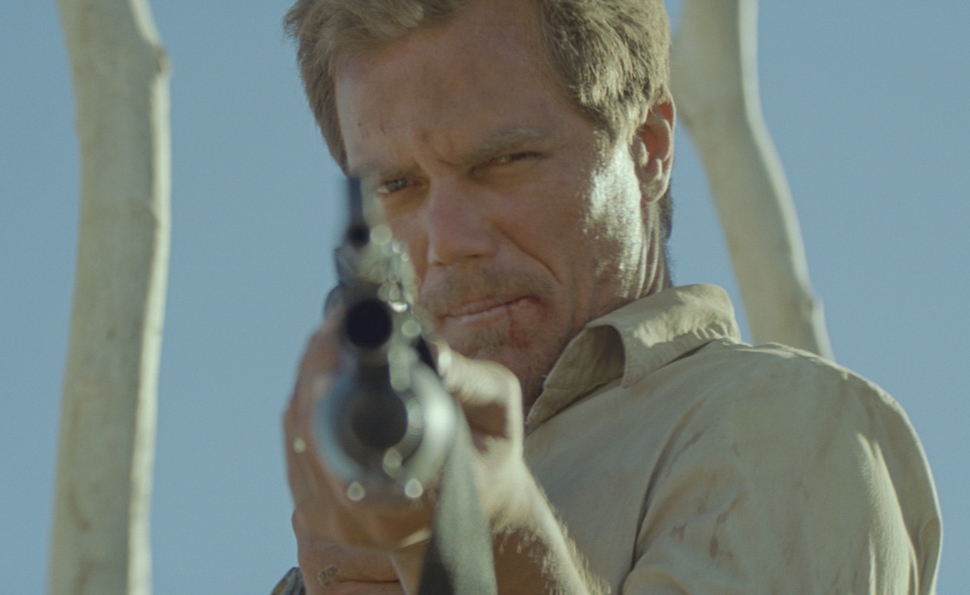 The first time Ernest Holm (Michael Shannon) appears in Young Ones, he’s wearing a pair of homemade sunglasses—two flat chunks of wood with razor-thin horizontal slits for him to peer through. The film is set at some indeterminate point in the future, at a time when whatever part of America he inhabits (it’s never specified) has been ravaged by years of drought. The first shot is a close-up of the blazing sun, and an opening voiceover explains all about how the lack of water long ago drove just about everyone but Ernest and his family to greener pastures. Ernest’s extreme sunglasses make for a striking, otherworldly visual, suggesting a glare so fierce that normal outdoor vision requires them. Badass!

Then Ernest takes the sunglasses off and never puts them on again. Nor does anybody else in the film ever wear anything of the sort. They were an empty attempt at an arresting opening image, nothing more.

That’s entirely typical of Young Ones, which tosses a few science-fiction gadgets into a thin, uninspired Western saga and hopes they’ll compensate for the tedium. The film is divided into three chapters, each one named for and focusing on a different character. Ernest’s initial chapter provides the exposition and sees him attempting to strike a deal that will irrigate his land, which he insists can still flourish if it just gets some water. Chapter two, following some grave misfortune, shifts to a young lad (Nicholas Hoult) who goes by the ludicrous moniker Flem Lever. He’s been engaged in a furtive romance with Ernest’s teenage daughter, Mary (Elle Fanning), but he’s up to no good, so it’s necessary for Ernest’s son, Jerome (Kodi Smit-McPhee), to set things right in the third and final chapter, which sees him discovering a terrible crime and plotting his revenge. (Mary doesn’t get a chapter, nor does Fanning get an actual character to play.)

Written and directed by Jake Paltrow (Gwyneth’s brother; she starred in his film The Good Night, alongside Martin Freeman and Penélope Cruz), Young Ones looks promising in the early going, when it’s relying on Shannon’s customary intensity and building its harsh, arid world. (Principal photography took place in South Africa.) Shannon quickly disappears, though, and that’s when the dreary plot kicks in. Neither Hoult nor Smit-McPhee possesses the authority to make their hollow constructs remotely interesting, and Fanning, who’s freakishly gifted, is reduced to standing around the margins of scenes, looking vaguely worried. Every so often, Paltrow and his design team serve up a reminder that this is a science-fiction Western: Ernest’s wife (played by real-life amputee Aimee Mullins), who’s in the hospital, walks around attached to some kind of futuristic spinal column that connects to wires above her like a cable car, and the family buys a four-legged robot wheelbarrow with a recording ability that proves crucial. Strip the film of these techno-prairie trappings, however, and it would barely even qualify as a programmer during the Western’s golden age.

Also, they knew how to edit a movie back then. The Dissolve would never dream of taking a stand against the dissolve, but it’s a device that works best in moderation. Young Ones may have more quick dissolves than straight cuts. If not, it’s pretty close. Practically every scene fades into the next one, speedily, which creates a sort of facile dreaminess in a context that doesn't demand that tone at all. Frankly, it looks like a jury-rigged solution to an editing-room nightmare caused by poor planning on the set, as if Paltrow gave no thought, when setting up compositions, to how the movie would flow. At best, it’s a meaningless tic designed to get viewers’ attention, like those wooden eye-slit sunglasses. Getting attention is easy, though. The difficult part is holding it.