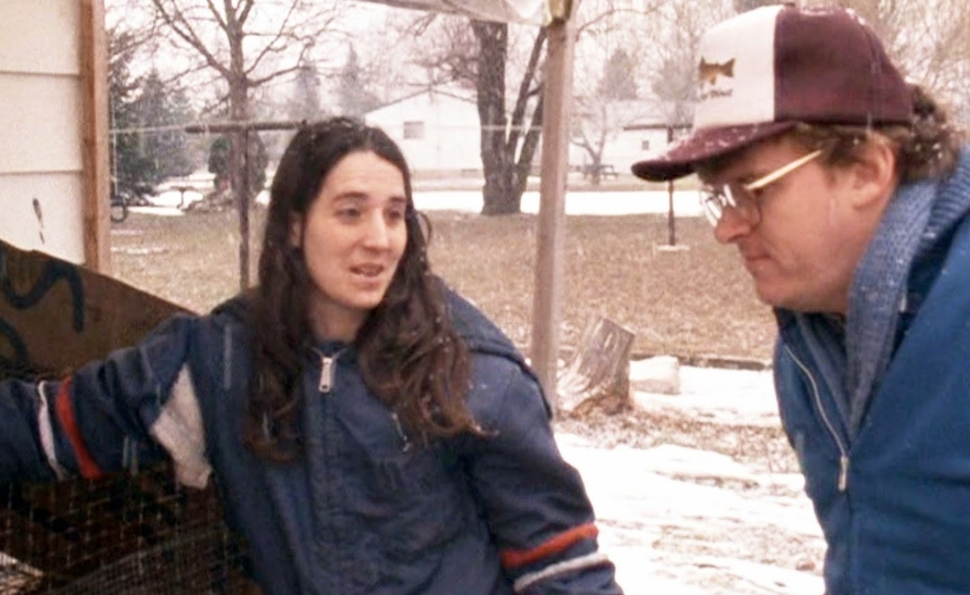 Michael Moore is a polarizing political figure who’s had a pervasive influence on the documentary form—often for the worse—so it’s easy to forget that as a filmmaker, he’s frequently done inspired work. Even though Moore’s 1989 documentary Roger & Me led to hundreds of snarky first-person films by  marginally talented activists, the film itself remains a hard kick in the head—a funny, angry inquiry into what the hell happened to the American dream. Here’s how relevant the movie still is: In the commentary track on the new Roger & Me 25th-anniversary Blu-ray edition, Moore looks back at the footage of his crumbling hometown and says, “Flint looks really good here.” Ultimately, Roger & Me didn’t document the bottoming-out of an industrial town. It recorded the beginning of an ongoing decline.

“Flint” is Flint, Michigan, which Moore returned to in the mid-1980s, just in time to watch General Motors shutter the local plants and put a lot of his old friends and neighbors out of work, with no hope of any of those old jobs ever coming back. And the “Roger” in Roger & Me is Roger Smith, the former GM CEO, whom Moore spends the entire film trying to track down for an interview, to talk about how his decisions are devastating an entire community. Between the scenes of Moore trying to ambush Smith, he weaves in vignettes spotlighting the absurdity and cruelty of life in Flint in the late 1980s, talking to unemployed people who survive by selling plasma, butchering bunnies, or roping people into the pyramid scheme that is Amway (short for “The American Way”). Moore fudged the timeline some in the interest of telling a good story, which critics and other documentarians dinged him for after Roger & Me became a surprise hit. But for the most part, the movie assembles a sort of “greatest hits” of the indignities Flint suffered in the 1980s, as crime and foreclosures spiked, and every idea to turn the local economy around failed spectacularly—and somewhat hilariously.

The hilariousness has become more of a sticking point with Roger & Me in the years since its release, along with the way Moore represents himself. Moore aimed to sell a hard message with humor, in part by cutting interviews to end on a laugh-line, whenever the person Moore’s talking to says something ridiculous or ironic. Meanwhile, Moore plays the role of the rumpled, faux-naïve Everyman, bulling his way into office buildings and exclusive clubs by pretending he doesn’t know any better. Moore set out to grill fat-cats, but a lot of Roger & Me consists of him hassling ordinary people, then making them look silly in the editing room.

But that’s actually less of a problem with Roger & Me than it is in some of Moore’s later films, or in the post-Moore wave of agit-prop docs. More often, Moore and his editors, Jennifer Beman and Wendey Stanzler, use their cuts smartly, to contrast lavish country-club parties with the evictions happening across town, or to play up the differences between the Beach Boys’ America and Flint’s boarded-up storefronts. The big question Roger & Me asks over and over is why the upbeat working-class and middle-class of 1950s and 1960s industrial films and TV sitcoms disappeared. The money hadn’t left Michigan—Moore keeps showing where the money is, in the suburbs—but the jobs had vanished, and no one seemed willing to be honest about the reasons.

Watching Roger & Me now, it’s striking how much of it looks like it could’ve been shot in 2014 (although it’d be shot on digital video now, not celluloid). The gated-community residents and visiting conservative entertainers who insist that times are tough because unemployed people just refuse to buck up and go get a job? They’d have steady gigs on cable news today. And when Smith delivers a Christmas message that quotes Charles Dickens—apparently missing the point of the whole story of Ebenezer Scrooge—it’s not unlike modern bloggers and pundits who twist popular culture or religious doctrine to support their own worldview. What stood out about Roger & Me in 1989—and still stands out—is Moore’s frustration about how the people running the country weren’t just refusing to listen to the voices of the people they were harming: They also apparently couldn’t hear themselves, and how callous they sounded.

But the real enduring value of Roger & Me (as with all Moore’s films, even the sketchier ones) is in the way it captures and preserves aspects of American life that are left out of other films. Throughout Roger & Me, Moore is wistful about the old newsreel footage of parades in a thriving downtown Flint, and he smirks at the way the state of Michigan is more interested in re-creating the old Flint in museums, malls, and theme parks than in trying to make the modern Flint viable. Yet in it’s own way, Roger & Me is a museum exhibit, freezing Flint as it was.

The lone extra on the Blu-ray edition is a Moore commentary track, which offers some insight into how he made Roger & Me through a long process of trial and error, which included shooting footage he couldn’t use because the exposure was wrong, and learning to hone his interview technique to be less confrontational and more casual. But Moore also takes the opportunity to underline his points even more than he does in the original film, saying that with Roger & Me, he was only trying to show what he feels should be on the news every night: people being evicted from their homes for the lack of a few hundred dollars.