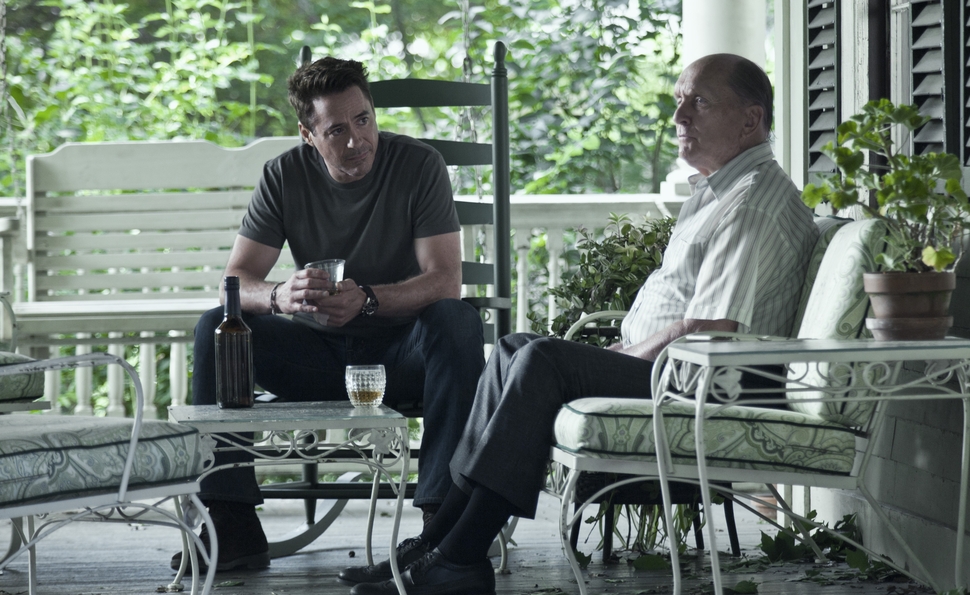 Even in a film short on subtlety, the little touches can stand out. The Judge, a family drama in the guise of a legal thriller, spends much of its running time moving from one big, dramatic moment to the next, but few have the impact of a simple gesture in an early scene. Called home to small-town Indiana from the godless city of Chicago following his mother’s death, high-powered defense attorney Hank Palmer (Robert Downey Jr.) reclines on a couch and shoots the shit with his brothers Glen (Vincent D’Onofrio), a former major-league pitching prospect whose career was cut short for reasons not revealed until later in the film, and Dale (Jeremy Strong), a man with an indeterminate, story-friendly mental impairment and a habit of living behind a camera he uses to take movies wherever he goes. Hank has nothing but disdain for his hometown, with its flapping American flags, pleasant riverside downtown, and blueberry festivals, and little affection for his family, which he’s avoided for years. Yet when his father Joseph (Robert Duvall), a respected judge, walks in the room, down come the feet as Hank sits up, as if by instinct. Contempt can be put on with age, but respect and fear last a lifetime.

The best moments of The Judge explore the way the past, with its insistent family ties and old wounds, pulls on the present. The morning of his mother’s funeral, Hank drops into a diner, only to find his high-school girlfriend Samantha (Vera Farmiga) still working the counter, and still cutting him no slack for skipping out years ago. He hasn’t so much fled his mistakes as let them grow stronger with age. Later, after learning his father has been secretly receiving chemotherapy and is suffering from late-stage cancer, he helps Joseph to the bathroom while the older man loses control of his bowels. Director David Dobkin (Wedding Crashers, The Change-Up) lets the scene play without looking away, a rare portrayal of what we sometimes have to do for aging parents that Downey and Duvall perform beautifully with a mix of embarrassment, gratitude, and surprise. They’re men for whom love ultimately trumps disdain, even if it takes a crisis for them to realize that.

It’s frustrating, then, how often The Judge steps away from that sort of honesty. It’s less concerned with who the Palmer men are than it is with finding avenues that lead to big speeches and heated confrontations, whether in the courtroom or behind closed doors.

Joseph’s failing health sets the plot in motion. The day after the funeral, his sons find that his treasured Cadillac appears to have been in an accident. Soon, a man to whom Joseph once gave a light sentence, and who subsequently committed murder, is found dead on the side of the road, the victim of a car accident. But if Joseph killed him, he can’t remember it, much less remember if he wanted to do it.

The screenplay, by Nick Schenk and Bill Dubuque from a story by Schenk and Dobkin, plods through the legal-thriller beats without finding many thrills. After Joseph’s first lawyer (a fun Dax Shepard) proves unfit to take on such a big case, Hank steps in, soon butting heads with out-of-town prosecutor Dwight Dickham (Billy Bob Thornton), who reveals he has a personal stake in winning the case. Then again, everything’s personal in The Judge: Hank’s work has destroyed his marriage. Joseph’s alcoholism and strict parenting has spoiled his relationship with Hank. Hank’s irresponsible youth has had an impact on Glen and Samantha. Everyone’s upset at all times, and not afraid to talk about it, loudly. Yet the emotions underlying the conflicts never seem like the point of the film, only the conflicts themselves, and the possibilities they create for the actors performing them.

The Judge ultimately plays less like a film than a series of big moments, some of which work well. Downey, Duvall, Farmiga, D’Onofrio, and Thornton aren’t known for making dull choices, and they often dig out nuance where others wouldn’t find it. Downey and Duvall in particular have such contrasting acting styles that, up to a ridiculous courtroom climax, it’s a pleasure to watch them play off each other. Nobody delivers what another character calls “hyper-verbal vocabulary vomit” as well as Downey, and Duvall is the rare actor who can command the screen with the smallest gesture.

Dobkin’s direction doesn’t do them any favors, however. Best known for broad comedies, he’s assembled an amazing cast, but doesn’t have the confidence to let them do the heavy lifting. Working with frequent Spielberg cinematographer Janusz Kaminski, Dobkin fills the film with Kaminski’s signature blown-out images of sunlight pouring through windows, to the point where it seems like God might be waiting just outside to cast judgment on the characters. It’s more moviemaking, more speechifying, and generally just more than the modestly scaled story can support, and The Judge ends up the lesser for it.