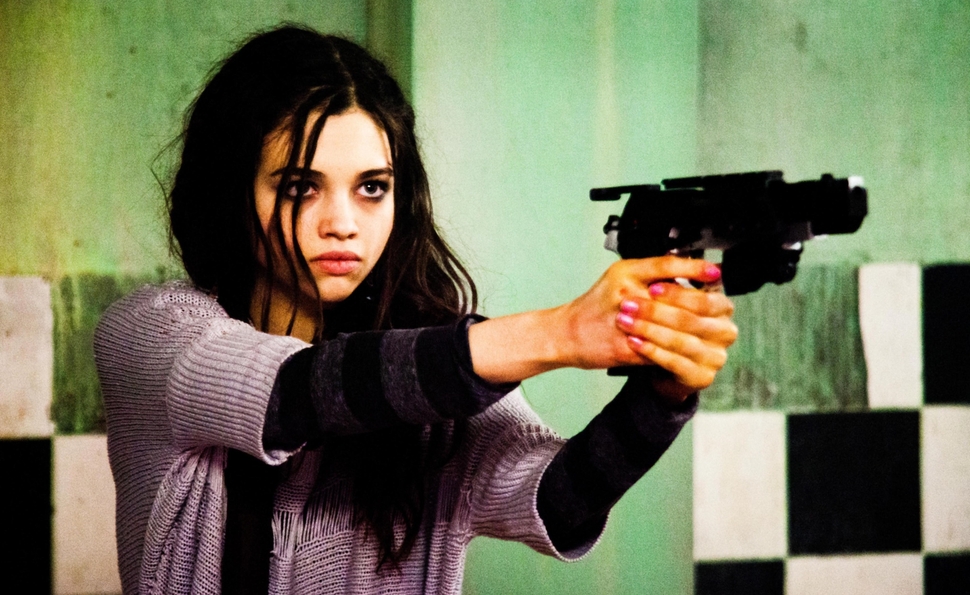 First released in 1999, and censored (or banned) across the world approximately five minutes later, Yasuomi Umetsu’s Kite is an hourlong anime that remains popular in part because of how transparently it strives to create a perfect storm of basic male fetishes. The story of an orphaned teenager named Sawa who’s determined to exact revenge on the man who murdered her parents, Kite was ground zero for the “schoolgirls and shootouts” subgenre of post-Woo action cinema. The anime introduced Sawa as a busty killing machine who kept her mouth shut and her guns loaded, and Umetsu doubled down on the character’s subservience by making her the sex slave of the lecherous detective assigned to her parents’ case. The OVA lets horny otaku indulge in casual misogyny and rape fantasy, then absolves them with an ending that restores Sawa’s killer agency over her own body. Hayao Miyazaki it ain’t, but Quentin Tarantino sure loves it. (To be fair, using Sawa as the starting point from which to develop Kill Bill’s Gogo Yubari epitomizes Tarantino’s gift for bettering his influences.)

A live-action adaptation of Kite was never going to be easy (or smart), which possibly made it inevitable. The producers on the project immediately recognized that the film’s approach to teenage sexuality would have to be diluted, and chose to emphasize the anime’s combustible action sequences, which include a number of memorably destructive setpieces. They hired David Ellis to direct, and he in turn convinced his Snakes On A Plane star Samuel L. Jackson to play the detective character, affording the project the modicum of credibility it needed to go into production. Unfortunately, Ellis was found dead in the bathroom of the Johannesburg hotel where he was staying during the film’s pre-production, and Kite was confronted with yet another obstacle in its ill-fated march to the screen. Determined to realize Ellis’ final project, and carried by the unique inertia that fuels bad ideas, the producers hired a local South African director named Ralph Ziman, and kept to their initial schedule.

To the surprise of exactly no one, the resulting film is terrible. Relocating the story from contemporary Japan to post-apocalyptic green-screen—a decision that appears motivated by the convenience of reusing the sets from Dredd—Ziman’s Kite runs 25 minutes longer than the anime, yet somehow manages to tell only half the story. An opening title card sets the scene, immediately confusing newcomers and fans of the property alike: “Post financial collapse, state security has broken down. Numbers gangs [sic] terrorize the streets, selling children to international flesh-cartels controlled by the Emir.” The Emir is the bad guy, and “international flesh-cartels” is a really fun way of saying “human traffickers.”

Somewhere in this colorless hellhole of a near future, there’s a girl with a pink wig. Taking fewer cues from Kite than from Kick-Ass, Sawa (perfunctorily played by The Secret Life Of The American Teenager actress India Eisley) is a button-nosed killer who dresses like a runway model and inserts all manner of pointy metal objects into the brains of the men she meets. As in the anime, Sawa has an affinity for exploding bullets. Unlike in the anime, they look embarrassingly cheap.

Sawa’s biggest hurdle in tracking down the Emir, the man she believes is responsible for her parents’ death, is that she’s severely addicted to a drug called “amp.” It’s unclear what kind of high amp provides, but the drug—which leaves some serious withdrawal in its wake—is known to deprive its users of their memories, which makes it of special value to the citizens of a futuristic hellhole who would rather forget who they are. “A person with no sense of history isn’t a person, just a number in the body count,” declares Jackson’s Lieutenant Aker, who spends much of the film mansplaining Sawa’s life to her.

As Kite runs down the clock by aimlessly following Sawa from target to target up the ladder of forgettable villains, she learns a few obvious facts about her parents and negotiates a lifeless relationship with the kid who played young Gatsby. In the process, it becomes increasingly clear that Ziman lacks the budget to re-create the anime’s action sequences, and the imagination (and/or time) to compensate for that. Despite the transplanted setting, both the characters and the gunplay are extremely faithful to the source material, a fidelity that exposes the poverty of the film’s violence and the bloat of its narrative in equal measure. Filled with light parkour, terrible speed-ramping, and frenetically edited combat (the scenes were shot on three or four cameras simultaneously to accommodate for the too-tight schedule), Ziman’s film could easily be repackaged as The Asylum’s ripoff of Lucy.

Although the live-action Kite has been graphically desexualized, the anime’s exploitative attitude nevertheless prevails, made all the more prominent by the film’s refusal to engage with it directly. Sawa is drooled over by every man she meets, often permitted access to their inner sanctums because of her pretty face, as they keep telling her. Perversity was the anime’s greatest asset, for better or worse. It’s an enormous relief that Ziman’s film refuses to confront that element, but doing so also strips the story of its franchise’s primary appeal. It’s a lose-lose scenario that invariably points back to the fact that Kite shouldn’t have been remade in the first place.