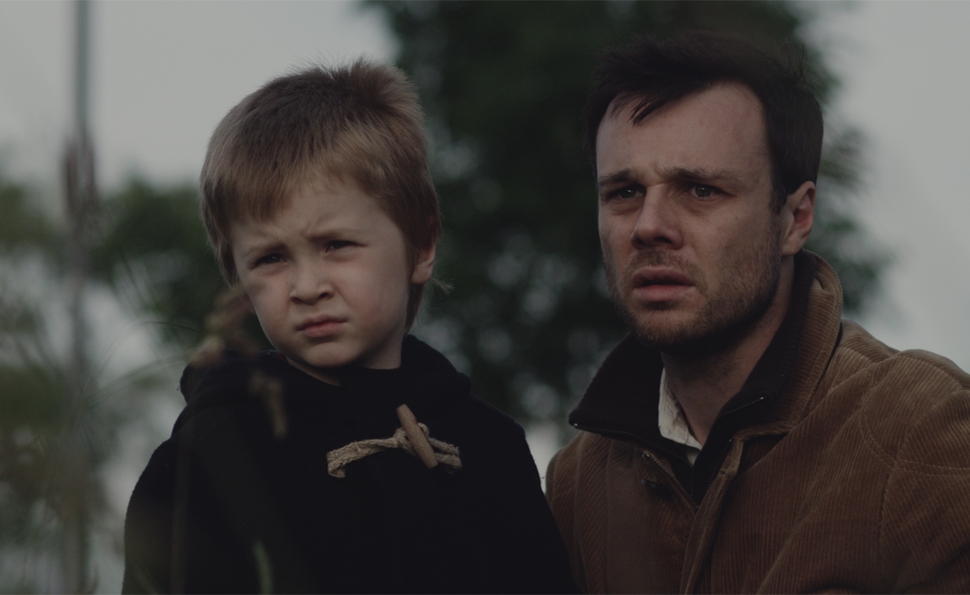 Ivan Kavanagh’s The Canal opens with David (Rupert Evans), a film archivist, speaking to an auditorium of restless, unimpressed children. He tells them that the archival footage he’s about to show them is as good as a real ghost story, because everyone appearing in the footage is dead. The kids yawn. It’s a striking opening because of the colors and Kavanagh’s careful framing: David’s head is shown against a redly lit projection screen, isolated, as he talks to the kids. When the point of view switches, and he’s shown from behind, all of the seats in the auditorium are revealed as bright red. The scene itself is benign, a guest lecturer at an elementary school trying to get kids interested in history, but the mood overall is immediately one of unspeakable dread.

For the most part, that sense of dread is maintained throughout The Canal, a good-looking, sometimes completely terrifying haunted-house story. Kavanagh periodically manages to create a truly spooky vibe, using simple and effective cinematic devices and a heart-attack-inducing score by Ceiri Torjussen. The sound design is superb: Simple things like zipping up a kid’s coat, or the flap-flap-flap of a roll of film spinning on a projector, crack thunderously out of the silence. Haunted houses are well-trod territory in horror films, and Kavanagh keeps it simple, letting the emotions be the most overwrought thing on the screen. Audiences may wait tensely for the “Gotcha!” moments, or the false scares, but The Canal doesn’t supply them. It creates unrelieved tension through stillness and emptiness. Kavanagh uses repetitive slow pans of the camera—into dark corners, empty stairways, open doors—and creates the sense that the house is alive, that something horrible is waiting in the shadows just around the corner.

David and his wife Alice (Hannah Hoekstra) are happy in the film’s prologue, deciding to buy a big old house that stands on the edge of a canal. Alice is pregnant, and the couple is excited about their new life together. Sure, David catches a glimpse of something moving quickly at the bottom of the stairs, something that has vanished into thin air when he goes to investigate further, but what old house doesn’t have its quirks? Five years later, David and Alice are raising their dinosaur-obsessed son Billy (Calum Heath) with the help of a sweet Irish nanny (Kelly Byrne), juggling two careers, and on a bit of autopilot with their relationship.

Their complacency is shattered by two events: Through the course of watching some footage donated to the archive by the police department, David discovers that a grisly murder occurred in the house where he and his family now live. He watches grainy black-and-white footage of a dead woman being dragged out of the canal in 1902, her glowering husband escorted out of the house in handcuffs. He starts to research the crime, quickly becoming obsessed. At the same time, David becomes certain that his increasingly distant wife is having an affair, so one night, he decides to follow her. The next morning, Alice is missing, and the police start to circle David as the prime suspect. Steve Oram (from Sightseers) plays a deadpan detective with chronic acid reflux who tells David during an interrogation, “People always suspect the husband. You know why that is? Because it’s always the husband.”

What David saw on the night he followed his wife is filmed in such a completely hallucinatory, nightmarish manner that it calls into question the reality of what is onscreen, as well as David’s sanity. Is he having a fever-dream? Playing out a revenge fantasy? Or is it really happening? Kavanagh allows that ambiguity to blossom, poisonously. David knows something weird is inside his house, behind the walls, maybe, and he thinks it’s connected to that 1902 murder. But who will believe him? Rupert Evans’ performance is heart-wrenching in its portrayal of a man’s accelerated emotional disintegration.

What happens in The Canal isn’t as important as how it happens. The climax derails into silliness, but by that point, the film has done most of the necessary work. Whether a ghost is actually haunting David and his family becomes almost irrelevant in the face of Evans’ performance of a man driven mad by jealousy and grief. Kavanagh is interested in the spaces between people: He often places two characters facing each other as they talk, their stillness and the space between them growing more and more unbearable as the scene continues.  Kavanagh frames things carefully. He withholds. He reveals things only partially. He lets the silences yawn out around the characters, coming at them through open doors, and up empty stairs. When the scares finally do come, the effect is even more terrifying because they emerge out of such stillness.