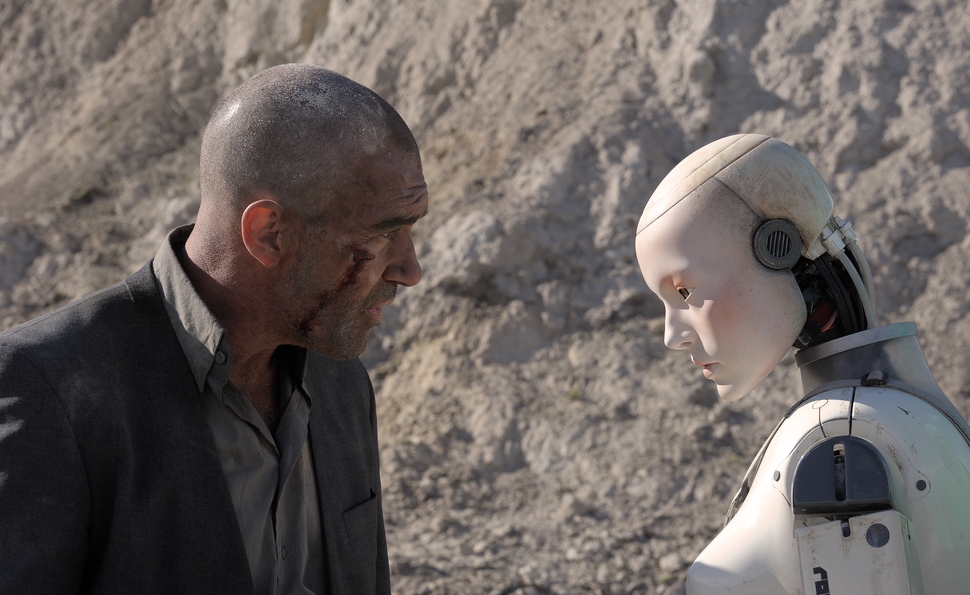 Over the course of the short stories that make up the seminal collection I, Robot, Isaac Asimov uses his Three Laws Of Robotics as a continuing exercise in logic and exploration of loopholes. The laws themselves (which Asimov always insisted were originally formulated by one of his editors, John W. Campbell) are just common-sense safeguards that human beings would (will?) surely install: Robots can’t hurt people; robots must follow human orders (but not orders to hurt people); robots should protect themselves (unless self-preservation involves disobeying an order, or would result in human harm). At the heart of each story is some apparent irreconcilability between one or more of the laws, resulting in erratic or inexplicable robot behavior. All problems with robots generally boil down to semantics.

Automata, the oddly unspeculative second feature by Spanish filmmaker Gabe Ibáñez (his first feature, Hierro, was never released in America), concocts its own variation on the Three Laws, then proceeds to do absolutely nothing with them. Thirty years from now, more than 97 percent of humanity has been wiped out by solar storms that left the Earth a scorched desert. The few inhabitable cities that remain are guarded and served by vaguely humanoid (but pointedly faceless) robots, which are controlled by two “protocols.” The first protocol is basically Asimov’s First Law, a gimme: robots can’t hurt people (or any other living creature, in this case). The second protocol, playing a much bigger role in the story, makes it impossible for robots to repair or alter themselves or each other. Ostensibly, they’re stuck as is, dependent on us.

It’s a big deal, therefore, when a cop (Dylan McDermott) discovers a robot that appears to be performing surgery on itself. He promptly blows it away, and the case gets handed to insurance investigator Jacq Vaucan (Antonio Banderas, shaved bald to look more robotic), who promptly finds another suspicious robot, which proceeds to commit suicide by deliberately setting itself on fire. Further inquiries lead Jacq to a sex robot named Cleo (voiced by Melanie Griffith, who also briefly appears in the flesh as Cleo’s creator) and get him targeted by human assassins who believe he’s betraying his own species. Eventually, Cleo and several other altered robots drag Jacq into the radioactive desert, where their leader, a robot who improbably speaks with the insinuating purr of Javier Bardem, explains the game plan.

Except he doesn’t, really. For all these bland characters’ endless prattle about the second protocol, Automata never sets up any built-in flaw or logical ambiguity that prompts the robots to abandon humanity and seek out their own destiny. They just do. The Bardem robot (who altered all the others) insists that nobody altered him—his freedom from the second protocol “just happened,” in the same way (another scene strongly implies) that human beings gradually evolved from dumb proto-apes into technological wizards. That line of alleged reasoning would make Asimov retch, since robots don’t reproduce, experience no genetic mutations, and thus cannot evolve. Nor is there any sensible explanation for why Cleo and the others kidnap Jacq and force him to spend time in an environment that’s likely to kill him, since the first protocol remains intact. They keep saying it’d be dangerous for him to return to the city, but that’s a purely hypothetical danger; dying from exposure to radioactivity is a clear and present danger.

In the end, the only real function of the second protocol’s violation is that it allows robots to get repeatedly shot, as some of them can now repair themselves. Apart from some impressive special effects, that’s all the excitement Automata has to offer. Dramatically speaking, the film is almost completely inert, as there isn’t a human or a robot in sight with any sort of clear agenda; Jacq spends the entire second half of the film getting carried across a vast wasteland, only occasionally coming to life to throw a snit fit. (At one point, he hilariously bellows, “I’m a human! I’m a human! You have to obey me!”) A subplot involving a threat to Jacq’s wife (Birgitte Hjort Sørensen, from Borgen) goes nowhere, mostly because she clearly exists only to be pregnant and represent a faint hope of humanity's future. Automata approximates the look and feel of idea-driven science fiction, but it doesn’t have any actual ideas. That future looks bleak.