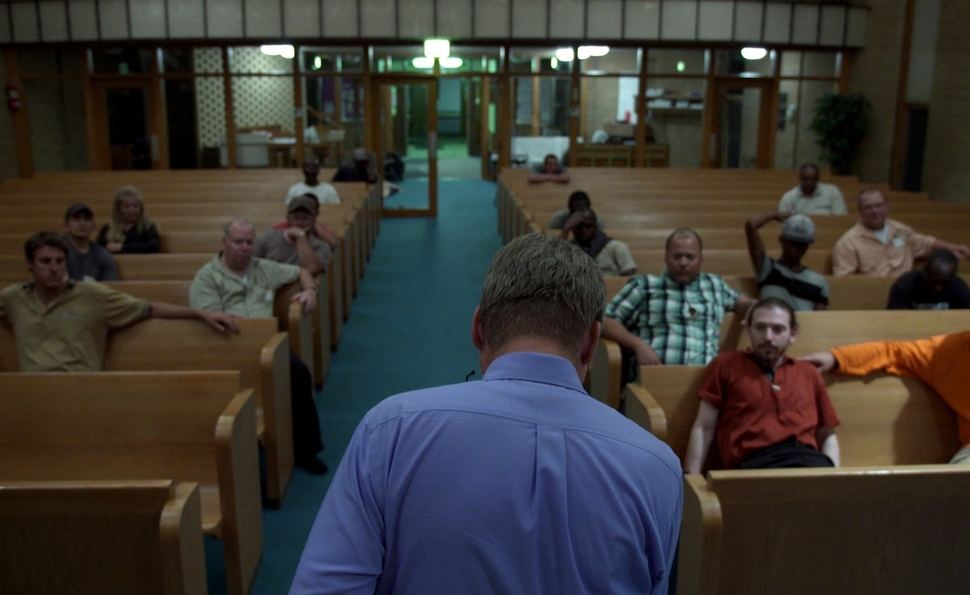 Between 2010 and 2013, the population of Williston, North Dakota, a town in the Western corner of the state, grew from 14,716 to 20,850, a spike owed to the influx of workers chasing a new oil boom, courtesy of hydraulic fracking. In the midst of a recession that was especially hard on uneducated laborers, men flocked to Williston chasing the promise of six-figure salaries, or at least a chance to get off the dole. But there were no jobs for all these men, and even for those lucky enough get work, there was not enough housing to go around. Feeling that it was his Christian duty to help these desperate strangers in their time of need, Jay Reinke, a local Lutheran pastor, decided to open up his church (and its parking lot) as a waystation for men needing temporary shelter. He called this program “The Overnighters.” To put it mildly, his good deed did not go unpunished.

Keenly sensing a juicy story in the making, director Jesse Moss (Full Battle Rattle) spent a year as a one-man crew in Williston, following Reinke on his quixotic mission to convince his neighbors, his parishioners, the local newspaper, and City Hall that his operation was a worthwhile (and Godly) undertaking. In The Overnighters, Reinke is shown as a warm, compassionate, energetic, and deeply flawed crusader who sacrifices his family life and his standing in the community on an experiment that’s volatile from within and without. Reinke believes that “fear” accounts for the hostility many residents harbor against newcomers, and that’s certainly true to an extent, but the spirit of Christian charity has its limits, especially when it’s revealed that some of the overnighters have criminal records. The paper starts printing the names and addresses of registered sex offenders in the town; the city considers an ordinance to ban people from sleeping in RVs, even if given permission by a property owner. And then, when certain revelations about a man staying in Reinke’s home come out, the program gets put in terrible jeopardy.

There are an abundance of great angles to Moss’ story, which epitomizes both the working-class desperation of the recession and the insularity of small-town America, which does not want your tired, your poor, and your huddled masses, even if they’re Americans, too. It’s an immigration tale about people who live within the same borders but are not given the same rights and courtesies. And Moss has a riveting subject in Reinke, who keeps on fighting an uphill battle and makes mistakes that speak as much to his extraordinary generosity as to his naiveté, arrogance, and miscalculation. Moss had the instincts to know this situation was a potential powder keg, but he couldn’t have known if it would blow, much less when or how.

For most of the way, The Overnighters simmers with the tension inherent in Reinke’s operation, and frequently breaks off to follow a few of the men seeking shelter and salvation from the church, many of whom bring more than a pickup truck’s worth of baggage. Then Reinke makes a decision with far-reaching consequences, and Moss’ camera is present for all the drama that unfolds, including several private confrontations where it’s seemingly in no one’s interest for Moss to be there at all. (See The Reveal for more.) It’s a gamble on any documentarian’s part to enter a scenario where something dramatic may or may not happen, because they can’t manipulate reality to abide by some pre-cooked narrative. Moss likely thought he had enough of a story in Reinke and his risky operation, but the thrill of The Overnighters is in witnessing a heartrending payoff that could not be anticipated nor written—and, miraculously, closes the movie on a perfect irony. After patiently fracking away in Williston for a year, Moss strikes oil of his own.