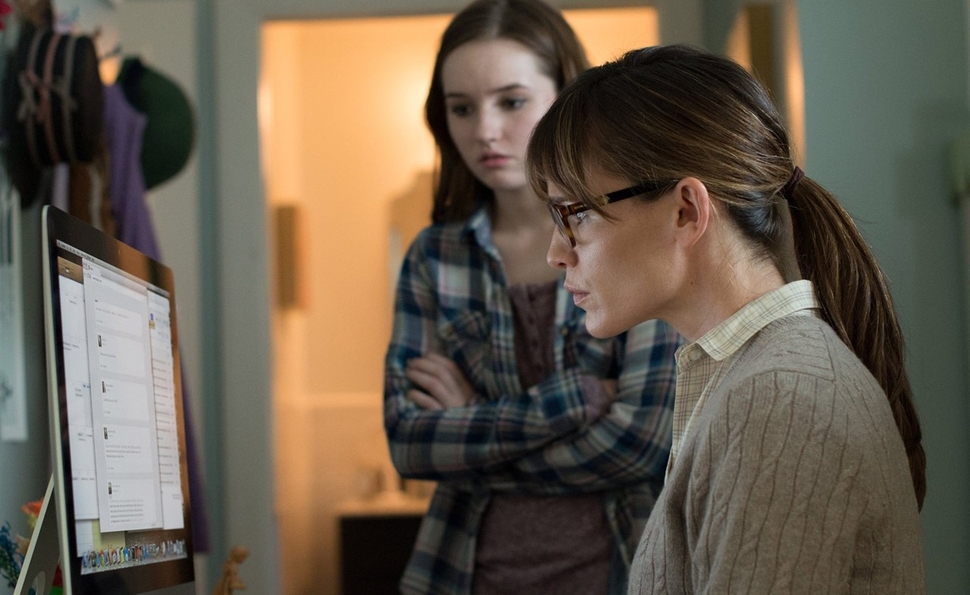 In Jason Reitman’s catastrophically misjudged ensemble piece Men, Women & Children, Jennifer Garner plays the ultimate Jennifer Garner type: brittle, high-strung, ready to snap at the first provocation. Her character, Patricia Beltmeyer, has one child, a thoughtful, sensitive teenager named Brandy (Kaitlyn Dever). Patricia is determined to protect Brandy from whatever predatory forces might slip onto her phone, email, Facebook, Tumblr, etc. She monitors Brandy’s browser history, her social-media outlets, and her text messages daily, and even leads a support group for parents worried about their children’s online activities. During one such session, a pair of single parents with legitimately troubled teens—one (Dean Norris) with a gloomy son who’s escaped into World Of Warcraft, the other (Judy Greer) who posts racy photos of her daughter to kickstart an acting career—share a private laugh about Patricia’s extreme anti-Internet dogma. The audience is encouraged to laugh along with them.

But here’s the thing: Men, Women & Children is Brandy, not the people laughing at Patricia. Despite a few last-ditch pleas of moderation, Reitman offers a comprehensive portrait of The Way We Live Now, and the overall effect is a mass freakout, like a roomful of grandparents booting up their first AOL CD-ROM. And while there’s no doubt that the Internet age has profoundly transformed the culture, adding new dangers and stresses and altering the nature of how we communicate, blind panic is not a sophisticated adult response. Hiring Emma Thompson to bring her British gravitas to the voiceover narration isn’t sophisticated, either. Nor is opening the movie in outer freaking space. Politicians can get away with such a nauseating combination of self-importance and social alarm, but artists cannot.

But wait, it gets more depressing! Donna (Greer) so wants to be a stage mom to her cheerleader daughter (Olivia Crocicchia), an aspiring actress, that she takes and posts boudoir photos of her. Star quarterback Tim (The Fault In Our Stars’ Ansel Elgort) is so bummed about his mother leaving his dad Kent (Norris) to start a new life with another man that he quits football and spends sleepless nights fighting virtual battles alongside like-aged inarticulate nitwits.

But wait, it gets even more depressing! There’s also Allison (Elena Kampouris), an insecure girl who so desires the romantic attention of a popular jerk that she’s starved herself into an eating disorder. Her problems are only marginally related to the Internet—there are sites that offer tips for the anorexic—but they’re glopped onto the narrative anyway. To borrow a phrase from Patton Oswalt’s bit on a particularly monstrous fast-food creation, the film is “a failure pile in a sadness bowl.”

The only blessed relief from all these drifting human satellites of misery come from the romantic connections between Tim and Brandy, who finds ways to circumvent Patricia’s cyber-net, and Donna and Kent, whom Greer and Norris play with such warmth, humor, and soul that they deserve a movie of their own. As it stands, even the people who make genuine inroads in the non-virtual world are doomed to get swept up in the tornado of bullshit sweeping Men, Women & Children across the plains. The film operates under the thesis that humanity has graduated to the filth-laden text bubbles that appear over everyone’s heads, and it supports that thesis at the expense of more varied outcomes and more thoughtfully realized characters. They’re all in service to the bigger picture.

After a career that started with four straight comedy-dramas—Thank You For Smoking, Juno, Up In The Air, and Young Adult—that at worst tended toward unbearable lightness, Reitman has lately handled seriousness with a heavy hand. The infamous peach-pie scene in last year’s Labor Day took food preparation to its most sexually awkward place since Andy Garcia rolled gnocchi with Sofia Coppola  in The Godfather Part III. But Men, Women & Children is all pie scenes, with leaden touches like Reitman juxtaposing Don and Helen’s dalliances to the Hall & Oates song “She’s Gone,” or multiple mad rushes to the hospital for self-destructive teen emergencies. It feels like it’s eight hours long, and it’s all too much to bear.