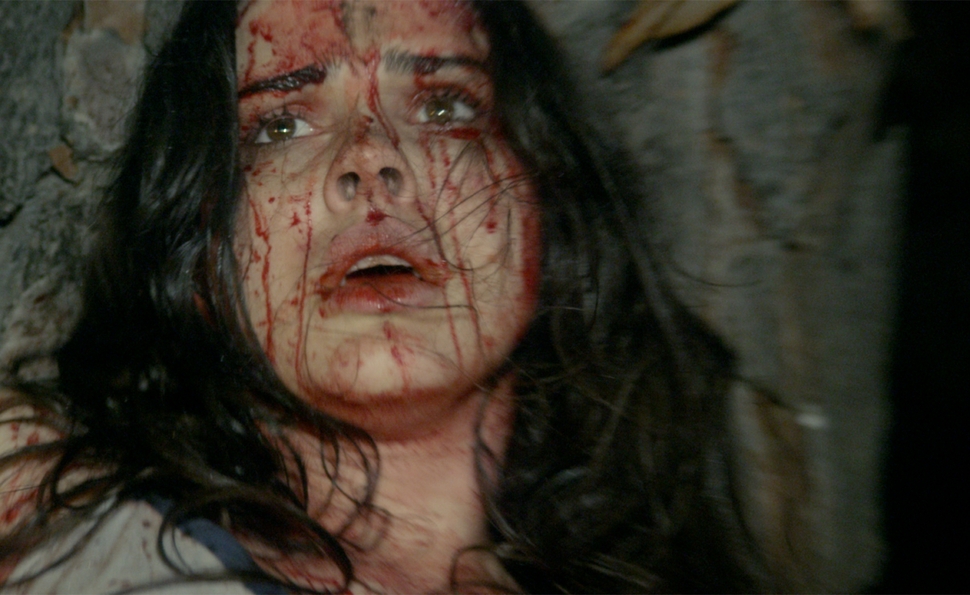 It would be easy enough to dismiss Inner Demons on premise alone, since it combines two already-tired horror-film elements into one movie. We don’t really need another found-footage movie or another movie about demon possession, much less one that smooshes both into one project. But that would also mean dismissing 2010’s The Last Exorcism, a pretty-scary previous attempt to join shaky, handheld footage and “documentary subjects” behaving like Linda Blair. Besides, Inner Demons’ premise is the best thing going for it, since it offers a twist on both subgenres. Rather than the traditional “this is the footage they left behind” setup that’s been so popular since The Blair Witch Project, Inner Demons takes the shape of raw footage from a long-running, Intervention-like reality show called Step Inside Recovery. Teenage protagonist Carson Morris (Lara Vosburgh) winds up in thrall not just to traditional evil spirits, but to drug addiction, a potentially clever way to combine two different sorts of soul-draining forces.

Once those twists have been established, however, the film has no more tricks, as if writer Glenn Gers (Mad Money) and director Seth Grossman (The Butterfly Effect 3: Revelations) thought a couple of innovations would be enough to keep the movie going. For a short stretch, it seems like it might. As jaded producers Suzanne (Kate Whitney) and Tim (Brian Flaherty) break in Craigslist-hired production assistant Jason (Morgan McClellan), they introduce him, and viewers, to the dirty ins and outs of reality TV. This includes goosing interviews to appear more spontaneous by asking subjects, “Could you put that in a complete sentence?”, taking bets as to whether they can prompt tears, and rifling through private belongings when they think no one’s around. Grossman is a veteran of reality television, including Intervention, and this knowing take on the form helps set it apart.

Once Inner Demons drifts from the inner workings of its central reality show, however, it starts to lose its way. In time, the producers recognize Carson is a special, possibly demon-possessed case, thanks in no small part to the fact that her reading habits include books like Real Demons and Demonic Possession And Mental Illness. Then out come clichés both vintage (a nurse who recognizes demon possession from her childhood in a Cameroonian village; ugly incidents with holy water) and recent (Paranormal Activity-inspired scenes of characters lingering in the frame just a little too long; stringy J-horror hair). Neither Grossman’s uninspired staging nor the performances help much. Even in pimples and goth attire, Vosburgh seems a little too sunny to be running from demons of any kind, and the piling of one shaky image atop another quickly becomes exhausting. Inner Demons starts to look like just another uninspired effort possessed by the spirits of older, better movies.