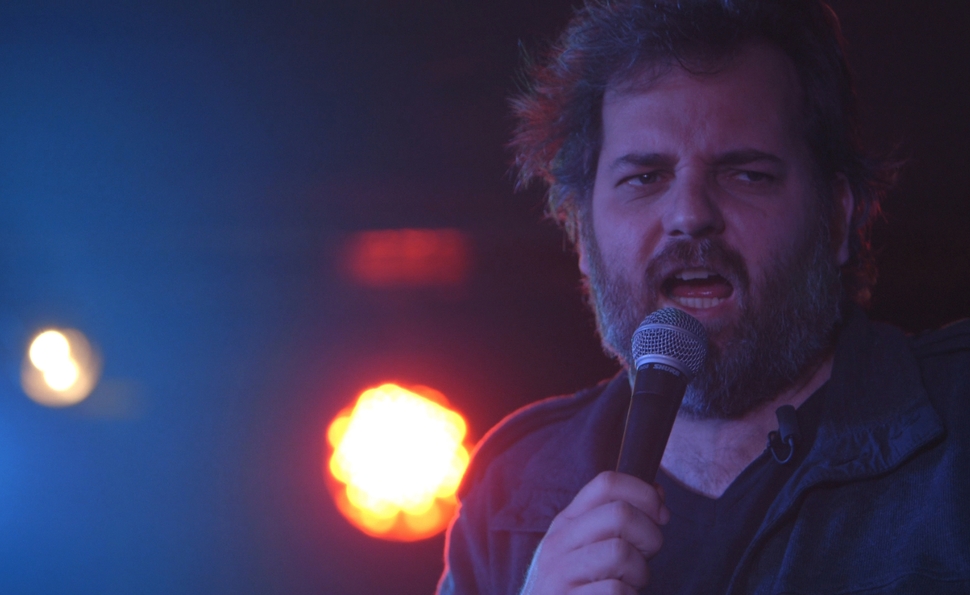 The wonderful thing about podcasts—and the limiting thing, too—is they can be recorded cheaply and without permission, and they can be personal, informal, and appeal to a niche within a niche within a niche. They don’t have to reach the biggest possible audience, like the Morning Zoo crew in the middle of the FM dial; they just have to reach their people, whoever or wherever they may be. It makes sense that Harmontown, a podcast built around Community creator Dan Harmon, became a popular example of the form, because Community itself often feels like a podcast that accidentally got greenlit by a major network. As part of NBC’s famed Thursday comedy block—which had lost its Must-See TV cachet, and judging from audience share, hasn’t since regained it—Community was low-rated from the start. But Harmon’s conceptual brilliance and his passion for the culturally arcane ensured that the audience for the show, however tiny, loved it with the intensity of a thousand suns. This accounts for why Yahoo! is giving it an improbable sixth season, when years ago, it would have been yanked in the middle of the first.

Now that niche within a niche within a niche—the one that watches Community, subscribes to Harmon’s podcast, and possibly produces fan art as well—can be counted on to experience Harmontown, a shoddy documentary about a 20-day blitz of live podcast recordings Harmon and friends did in January 2013. For starters, it’s actually tough to sort out what Harmontown is: It can’t be a warts-and-all profile, because Harmon famously has no filter, and uses the podcast as a repository for whatever whimsy, invective, or personal revelation comes tumbling out of his psyche. It isn’t really a concert film, because the onstage footage consists of highlights (and lowlights) from various cities, all suggesting Harmon’s seat-of-the-pants approach to performance rather than, say, a comedian doing the same bits night after night. It’s probably closest to being a promotional documentary, but that’s an awkward fit, too, because director Neil Berkeley isn’t pushing Harmon as an entertainer with a product, but as the center of a pop-culture phenomenon.

So what does that make Harmontown? A uniquely 21st-century vanity project, one owed both to the cult of the TV creator, and to Harmon’s insatiable ego. Interspersing tour footage with niblets of information about Harmon’s résumé—all buttressed by the five minutes of testimonials offered by famous talking heads like Ben Stiller, Jack Black, Sarah Silverman, and the Community cast—Berkeley makes the case for Harmon as a unique, temperamental comedy genius. That case is supported, strongly, by a list of credits that includes Heat Vision And Jack, a famously bizarre and expensive 1999 pilot (starring Black, and directed by Stiller) that never got picked up, but become the stuff of legend. It’s also supported by Comedy Central’s The Sarah Silverman Program, from which Silverman fired Harmon for his tyrannical behavior, despite finding his work consistently brilliant. But the crown jewel of the Harmon empire is Community, a sitcom by, about, and for a very specific creature: the culture-obsessed outsider.

Harmontown the podcast and Harmontown the movie are manifestations of the ever-expanding Community universe, which is full of quotes, memes, references, and byzantine curlicues of logic, as well as flotsam and jetsam that could only appeal to hardcore fans. This film falls squarely in the latter category: It’s a DVD extra to the ongoing showreel of Harmon’s career. Starting in Phoenix, Arizona, where Harmon awkwardly castigates the crowd for loving his work, the tour rolls on with Harmon; his girlfriend, Erin McGathy; his sidekick, Jeff B. Davis; and hirsute D&D dungeon master Spencer Crittenden onstage. The show is largely free-form, with a strong element of audience participation—a nightmare, in other words—and Harmon’s mood leaves an imprint on each performance. Some nights go great. Other nights have Harmon getting blackout drunk on moonshine. It’s like a box of chocolates.

Berkeley, who previously directed the Wayne White profile Beauty Is Embarrassing, does little aesthetically to make Harmontown especially compelling, or even intimate; as much as Harmon likes to reveal about himself, it must be on his terms, and his terms only. Reflecting on the tour, Harmon talks wistfully about fans who were shaking in nervous excitement to meet him—and he’ll dutifully sign anything they’ve got—but while that’s meant as a tribute to the people who adore Community (which is sweet and funny, and truly about community), his humility in the face of it rings false. The impression left by Harmontown is that the podcast and the tour are feeding the beast, worsening a pathology that casts him as the “mayor” of whatever stage he happens to be occupying at the moment. Despite a score that quirkily prods and beckons viewers to embrace this crazy roadshow and the unfiltered comic genius at its center, Harmon emerges as sour and abusive, an unrepentant man-child who treats his fans as enablers. Their love hits him like kerosene striking flame.