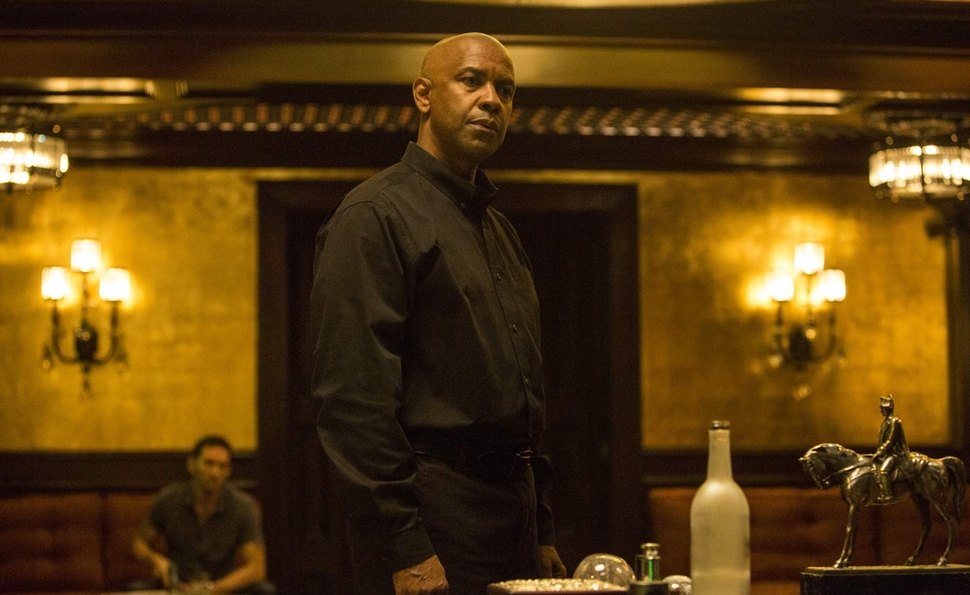 From some critical corners, the knock against The Dark Knight trilogy and other self-serious comic-book movies is that they’ve been sapping the fun out of the superhero genre, so perhaps it’s time to dial back—not all the way back to the Adam West Batman, but to a model more approximating entertainment. Loosely inspired by the 1980s TV series, The Equalizer suggests a related problem: Glum superhero movies are spreading into other genres, too. As Robert McCall in The Equalizer, Denzel Washington plays an avenging angel of the Death Wish sequels, a speak softly/carry a big stick type who helps ordinary city-dwellers to beat back the criminal scum oppressing them. He’s the people’s hero, but in the film’s conception, he himself isn’t fully human. He’s a relentless, mirthless killing machine, and he won’t stop until all the killing is done—at which point he can return to reading books and brooding.

Occupying a booth at a Boston diner that resembles an Edward Hopper painting, McCall spends late evenings flipping through literary classics and sparing a word or two for the other diner regulars. By day, he grinds out an honest living at a Home Depot-like home-improvement warehouse, where he offers some assistance to an overweight co-worker (Johnny Skourtis) who’s training to become a security guard. (This is what folks in the storytelling business refer to as “foreshadowing.”) One night, McCall witnesses one of his favorite diner friends, a teenage hooker named Teri (Chloë Grace Moretz), getting whisked away by Russian mobsters. She later surfaces in a hospital, comatose. McCall dons his virtual cape, strides into the lions’ den, and offers Teri’s vicious keepers an envelope full of cash to pay for her freedom; when they refuse, he uses his Spidey sense to beat a room full of them to death.

From there, The Equalizer can only change the stakes by increasing the threat level of the Russian mob, offering the ice-cold enforcer Teddy (Marton Csokas, enjoying himself) as a supervillain capable of shutting McCall down and protecting the reputation of his boss (Vladimir Kulich) back in the motherland. But the game doesn’t fundamentally change for McCall: He’s going to keep on killing until he rids the world of Russian mobsters. The variables have to do with where he kills them and how they will be bludgeoned, not whether something less monotonously gruesome is going to happen. Say this for The Equalizer: It gets the job done, and that job, to quote A Clockwork Orange, is delivering a little of the old ultra-violence.

The shame of The Equalizer is that it’s a sour reunion between Fuqua and Washington, the Training Day team that won the latter a richly deserved Oscar. Washington plays a monster in the earlier film, an L.A. narcotics officer mutated by corruption, but his performance made it possible to imagine a time when he might have been like his officer-in-training, played by Ethan Hawke. McCall’s past in The Equalizer is opaque—he’s a childless widower who harbors some regret for a history of violence, but that’s about it—and his ascetic lifestyle and badass reserve prevent the audience from understanding anything about him, even with an actor of Washington’s caliber in the role. All we get—beyond the stock gangsters and the stock hooker-with-a-heart-of-gold and the stockers at the home-improvement store—is McCall’s present, which is focused on the relentless, remorseless pursuit of street justice. There’s a crude, appealing simplicity to such a single-minded action movie, but it’s undone here by monotony.