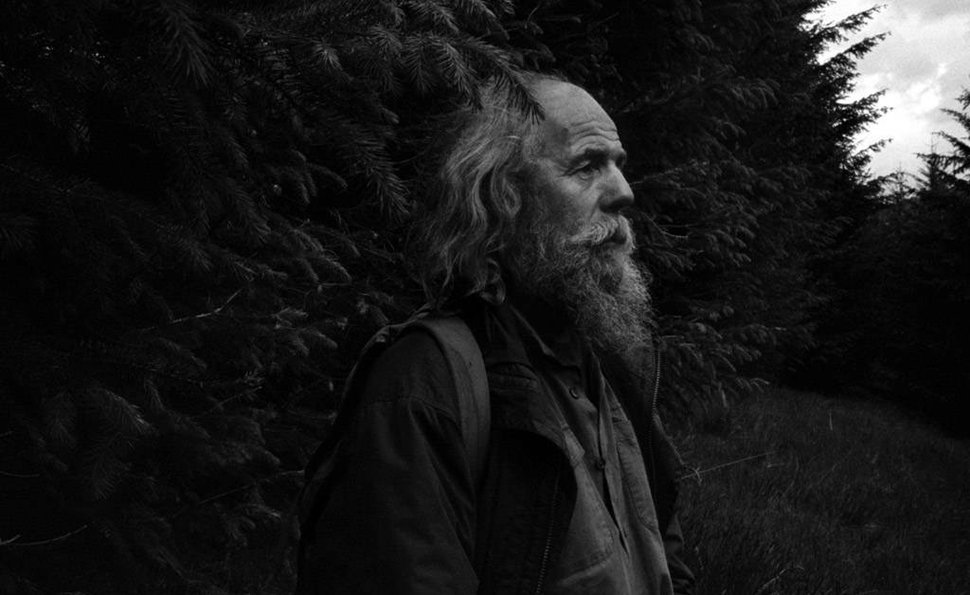 For people who have lived their entire lives in an era of instantaneous mass communication, the hardest part of a hermetic existence out in the woods probably wouldn’t be the loneliness; it would be the tedium of living far away from television or the Internet, with seemingly little to do to pass the idle hours. But Jake Williams—or at least the version of Jake Williams who appears in Ben Rivers’ film Two Years At Sea—makes being a reclusive old coot look idyllic much of the time. All alone (save for a cat) in a big house in the Scottish highlands, Williams occupies himself by reading, listening to records through his outdoor loudspeaker, and gathering supplies for projects ranging from the hard physical labor of survival to building a little raft and going for a float. As depicted in Two Years At Sea, Williams is no crank, and no ascetic. He has material possessions out the wazoo, and when he takes his morning shower, he whistles a happy tune—just as anyone who lived in his own super-awesome secret clubhouse would.

Rivers has taken pains in interviews to point out that Two Years At Sea isn’t strictly a documentary. The film reveals very little about who Williams is or why he’s on his own, and at least one segment of the film is like the documentary equivalent of a dream sequence, with Williams waking up to find that his motor-coach has been deposited in a tree, with him inside it. To emphasize his subject’s isolation, Rivers doesn’t engage with Williams on-camera, and instead watches him in silence as he hikes, forages, chops wood, and stares off into the distance. Occasionally, Rivers shoots footage of some of Williams’ old photographs, which show him as a younger man, sometimes with other people. Neither Rivers nor Williams explains the pictures. Two Years At Sea is structured like a fiction film in which the hero’s backstory is hinted at, but never made explicit.

At times, Rivers’ approach is maddening, given that the objects he focuses on, and the way he inserts them into long scenes of Williams going about his daily life, suggest a fuller, more poignant character study. But then, the point of Two Years At Sea isn’t to document Williams; it’s to bring the viewer into Williams’ world. Two Years At Sea is defined by its serenity, as Williams moves through an environment largely of his own making—or at least in collaboration with nature. Rivers lingers over images that fix Williams within his highland home, as in one shot that shows him asleep, with reflections of leaves on his window making it look like his face has melded with the surrounding vegetation.

Two Years At Sea could be a fraction or two more forthcoming about who Williams is. (Rivers doesn’t even explain the title, which according to the back of the DVD case has to do with how Williams earned the money to buy himself his own fortress of solitude.) But the reticence does allow the audience to draw its own conclusions about what’s going through Williams’ head as he sits on his raft for nearly 10 minutes of screen time, or stares into a campfire. Rivers’ use of older camera equipment and stock gives Two Years At Sea the look of an old piece of film that’s been left behind by a long-gone civilization, capturing the last man on Earth, and showing how he made use of all the old junk society left behind.

Cinema Guild’s DVD adds nearly half an hour of deleted scenes, with shots of Williams painting a roof, going for a motorbike ride, and generally continuing to fill his days with tasks and adventures. The disc also contains two of Rivers’ related short films. 2009’s “I Know Where I’m Going” is a Ken Jacobs-like cine-diary shot by Rivers around some of the more desolate stretches of the U.K. countryside, with some color footage of Williams in one segment, showing him as more plugged-in than he appears to be in Two Years At Sea. 2006’s “This Is My Land” is an earlier attempt at documenting Williams’ way of life. The latter film is a lot like Two Years At Sea, except that it’s faster-paced (in part because Rivers’ camera at the time couldn’t shoot long takes), and it includes moments where Williams looks into the camera and describes what he’s doing. To some extent, Williams’ loquaciousness in “This Is My Land” and his fiddling with modern technology in “I Know Where I’m Going” break the spell of Two Years At Sea, because it makes him seem less removed from the world. But the shorts do still convey how life moves at a different pace for a man who knows all the tricks for forging a man-made hedge, “if you’re not in a big hurry.”