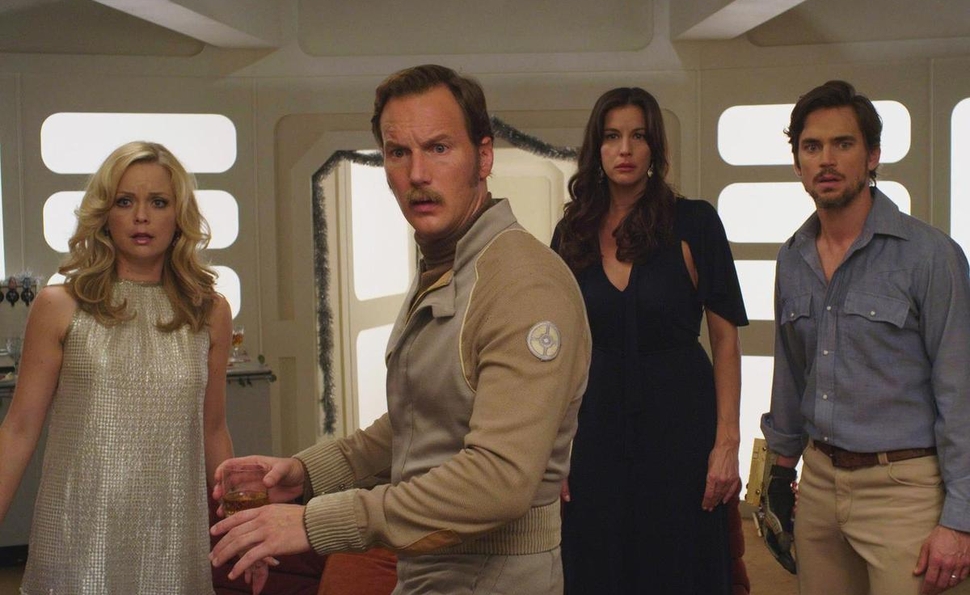 The present has an odd way of bleeding into the future, at least in the movies. Logan’s Run, for instance, is less a vision of the future than a snapshot of mid-1970s anxieties and mid-1970s fashion. From its perspective, the years to come would look a lot like a shopping mall, and take the culture’s obsession with youth, pleasure, and consumerism to a deadly extreme. It was as if 1976 had returned as a distorted remix of the 1976 that was.

The first feature from veteran TV and theater actor Jack Plotnick, Space Station 76 uses this tendency as the inspiration for a deadpan comedy set in a distant future that looks an awful lot like the not-so-distant past. The Omega 76 Refueling Station features gleaming white walls and cocktail-delivering robots, but its technological advances never get beyond the ceiling of a not-that-imaginative mid-1970s production designer. At the bridge, Captain Glenn (Patrick Wilson) works a control panel of blinking lights that also features a cigarette lighter. Engineer Ted (Matt Bomer) has an artificial hand, but it looks pieced together from various remote-control gadgets from Radio Shack, and its servos make noise whenever Ted moves it. When Ted’s wife Misty (Marissa Coughlan) receives a package showing the latest in fashion, she can barely contain herself as she pulls out the Viewmaster slides within.

As for life on Omega 76, it’s generally okay if you don’t expect too much. Nothing much seems to happen, giving the crew plenty of time to sleep with each other’s spouses, talk to robot therapist Dr. Bot (voiced by Michael Stoyanov, one of the film’s writers), and wonder if they’ll ever get promoted to a better station. Glenn has even more on his mind. Suicidally depressed and seldom without a drink in hand, he’s doing his best to hide his sexual orientation and make excuses for the departure of his old lieutenant, and secret love, Daniel (Matthew Morrison). Then the status quo is shaken up by the arrival of Jessica (Liv Tyler), Daniel’s competent, caring, slightly melancholy replacement, who takes an interest in the well-being of the ship and its passengers.

Space Station 76 plays it dry, often a bit too dry. It’s a film of many chuckles and few big laughs. When the laughs do come, they’re considerable, particularly during a long, awkward scene in which Jessica tries to talk to her father (2001’s Keir Dullea) via a newfangled videophone. Coughlan is particularly funny as the embodiment of Me Decade self-absorption, largely ignoring her daughter Sunshine (Kylie Rogers) as she chases booze with pills and pills with therapy sessions with Dr. Bot, whom she never seems to notice responds almost entirely in automated New Age nonsense, clichés, and easy prescriptions. (Sample response: “I’m going to adjust your dosage of valium to: As much as you like.”)

Laughs aren’t all the film’s after, however. Essentially a riff on 1970s suburban ennui transplanted to the stars, it shares as much DNA with The Ice Storm as with Silent Running. Plotnick, working from a script co-written with four other writer-performers, strikes a difficult balance between satire and drama, and doesn’t always quite get it right. But when he does, it’s something, particularly in scenes depicting the toll all that neglect is taking on Sunshine, who spends her days being home-schooled by a top-loading VCR, trying to get her parents’ attention, and not understanding why her gerbil keeps eating her pups. No matter what century she lives in, she’s a stand-in for a whole generation of latchkey kids raised by television and distracted adults.

Like Wet Hot American Summer, Space Station 76 works from the details out, using CGI to simulate old-school miniature effects and filling the station with 1970s-era relics, from glass sculptures to waterbeds. (Why wouldn’t future space travelers enjoy waterbeds?) The cast finds a tone that matches, never winking no matter how silly the world of the film gets. Plotnick’s mix of straight-faced absurdity and unexpected poignance doesn’t always gel, but it also makes the film more resonant than a straightforward spoof could ever be, and adds another layer to the film’s central joke: You can take to the stars, but the past will always travel with you.