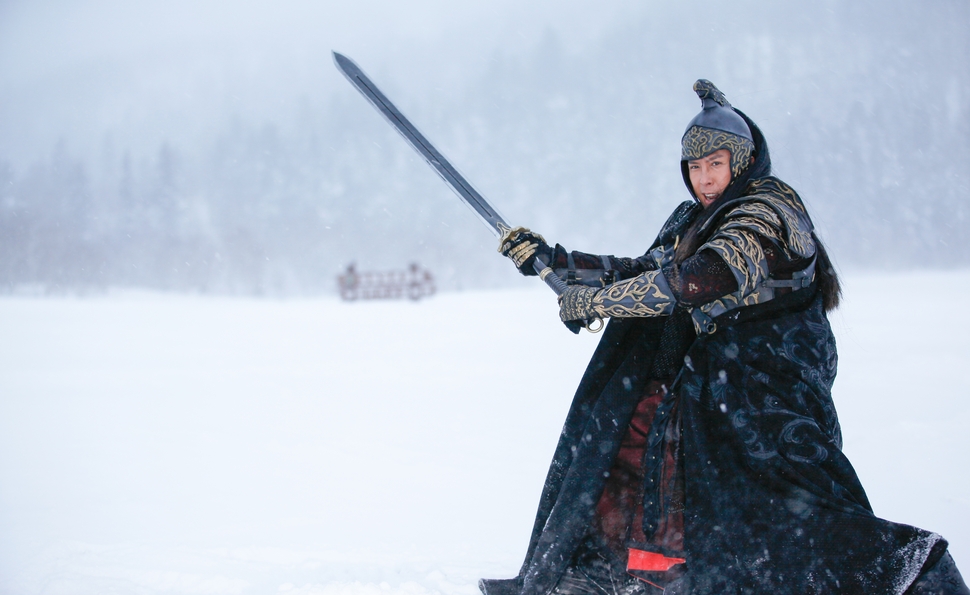 The only way to successfully mix two genres is to master them both, finding a harmonious fusion—or, barring that, at least skillfully guiding the audience through tonal shifts. Law Wing-Cheong’s action-comedy Iceman takes a different approach. The jokes fall flat, but the fights drag on until they evoke wistful memories of the comedy. Perhaps there were competing visions at work; the production was reportedly troubled, and the press notes credit a director (Law Wing-Cheong), an action director (Donnie Yen, who also stars), a visual director (Christopher Sun Lap), two directors of photography (Tse Chung To and Fung Yuen Man), and two editors (David Murray Richardson and Matthew Hui). But whatever the reasons, the result is a poorly stitched together Frankenstein’s monster of a film: crass one moment, grandiose the next, and dead from head to toe.

Iceman, a remake of 1989’s Hong Kong actioner The Iceman Cometh (no relation to Eugene O’Neill), has a nonsensical labyrinth of a plot. Donnie Yen plays Ying Ho, a Ming Dynasty palace guard who is accidentally frozen in an avalanche shortly after being unjustly accused of treason.  When the film opens, Ying is being transported through modern-day Hong Kong in a cryogenic chamber loaded onto a truck. The same thing happens that always happens when cryogenic chambers are loaded onto trucks, and Ying, with the help of troubled party girl May (Huang Shengyi) and her friends, must adjust to 21st-century life while avoiding death at the hands of his recently thawed companions. The whole thing is interwoven with flashbacks to a lengthy explanation of the Golden Wheel Of Time, a time-travel McGuffin that, with a brash disregard for Chekhov’s Gun, Law describes throughout the entire movie, even though no one ever uses it. It may come up meaningfully in the upcoming sequel, along with a lot of other things Iceman seems to be leading up to: It’s one of those franchise movies that stops instead of ending.

There are a few good future-shock moments, like a Halloween party where Yen mistakes men wearing Amazon-cult-favorite animal masks for the underworld gods Ox Head and Horse Face, or his stone-faced observation that, “People here are so licentious, they ought to be drowned to death.” For the most part, though, the humor runs toward the scatological: In the Ming Dynasty scenes, Yen and his compatriots are famous for their ability to pee for great lengths; in the present day, he literally shits his way out of an ambush. The one running joke that seems promising—May realizing her houseguest travels with gold ingots, and has a poor understanding of modern-day economics—is quickly abandoned in favor of an underdeveloped side plot about aging parents, and a sappy romance. And although there are inadvertently amusing lines of dialogue, it seems unlikely that the poorly translated subtitles on the version shown to critics are what will be in theaters, unless “You dastards!” has re-entered common parlance.

Still, no one watches Hong Kong action for the language. Unfortunately, Iceman’s fights (and there are plenty of them) are equally disappointing: incoherent and sloppy. A nightclub battle that should be one of the film’s highlights (it’s the kind of straightforward brawl where stuntmen can shine) instead approaches negative perfection: Law uses tight framing and rapid cuts so virtually no continuous motion is on camera, alternates without motivation between slow-motion and dropped-frame shaky-cam, and wraps the whole package up with extreme orange-and-teal color grading that makes everyone look like a corpse. In its way, it’s more vulgar than the shit jokes.

But Iceman isn’t all terrible: In the film’s last setpiece, the camera finally pulls back a little and lets the choreography breathe. The battleground is a multi-car pileup on the Tsing Ma Bridge—a replica was built at great expense when the production wasn’t allowed to use the original—and Ying Ho ends up on horseback, playing chicken with a Lamborghini. The animal charges the machine, Ying bats away the driver’s bullets with a tow chain, and for about 60 seconds, Iceman sustains the mix of abstract bodies-in-motion beauty and absurd one-upmanship of the best Hong Kong action films. Then the car skids out, and people start swinging axes and swords. The Tsing Ma Bridge sequence is more than 10 minutes long.