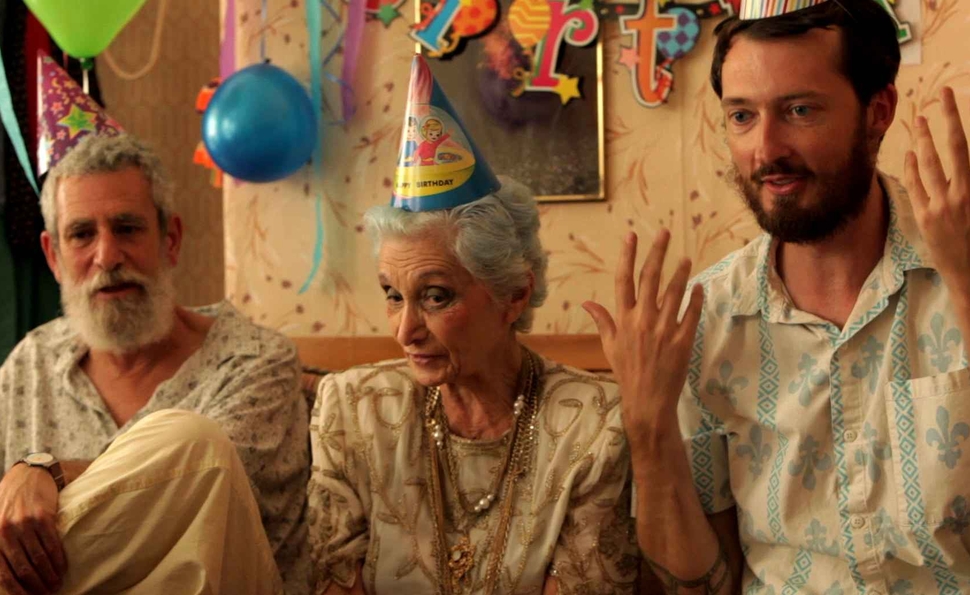 There are small moments that shiver with chaos and uncontrollable emotion in Swim Little Fish Swim, the first feature film by co-directors and co-writers Ruben Amar and Lola Bessis. Those are its best moments, the moments when it’s not in control of itself. Filmed in a fragmentary, collage-like style, Swim Little Fish Swim presents New York City in its silliness and random grit and beauty in a way that seems to “get” the city, especially now, when so much of New York has become homogenized beyond recognition. New York is still the place where hopeful artists cluster, where dreams are stronger than reality, where all of life is made up of “the substance of things hoped for.” The film explores familiar territory, and it’s trite in its particulars, but it has a strange emotional power that emerges almost despite itself.

The artists in Swim Little Fish Swim live in and around the East Village, where they gather in bars, each other’s apartments, and at sparsely populated open-mic nights, trying to keep the dream alive. Someone is always ready to bust out a ukelele at any given moment. Despite Amar and Bessis’ clear sympathetic tenderness toward this community, there’s something in the way they tell their story that allows other far more interesting things, ugly and angry, to explode to the surface.

Brooke Bloom gives such a strong performance as Mary, the hard-working wife of aspiring musician Leeward (Dustin Guy Defa) that the film tilts chaotically in her favor. It feels unintentional. Leeward and Mary have a 3-year-old daughter named Maggie (nicknamed Rainbow, played by Olivia Costello), and Mary’s goals for her family are conventional and out-of-step with the artists around her: She wants to move to a house in Jersey City, and can’t go on living in a one-bedroom walkup much longer. Leeward refuses to take a job writing commercial jingles, even though Mary begs him to because they need the money. He can’t, it will ruin his artistic integrity! (Defa’s performance is a small, ugly masterpiece of denial, bald-faced lying, and passive-aggressive pouting. To his credit, he doesn’t soft-peddle any of it.)

Wandering into this world like a chic somnambulist is Lilas (played by Bessis), a French girl in New York, trying to get a gallery to show her experimental videos so she can extend her visa. Lilas’ mother (Anne Consigny) is a world-famous artist preparing for an upcoming MOMA retrospective. She leaves bossy messages on Lilas’ phone, demanding that her daughter return to Paris and get a real life. Lilas needs a place to stay, and a mutual friend who is also crashing on Leeward and Mary’s couch invites Lilas to stay there too. Nobody checks whether this is all right with Mary. The message of Swim Little Fish Swim is, ultimately, just keep doing your art, and everyone in your life will be happier because you are happy! But Mary’s arc tells a different story, which takes over the film.

Lilas’ presence in the household exacerbates the tensions between husband and wife, especially because Lilas shows smiling support of Leeward’s dreams, all while wearing red lipstick, a white lace shirt, and a big bow in her hair. Bessis is sweet and simple in the role, but she isn’t the actor Brooke Bloom is. Lilas’ issues with her mother seem shallow, her desire to be an artist is muted and vague, and her explosive drunken moment in a bar one night doesn’t come off at all. On the flipside, Mary’s desire to create a stable life for her family feels specific, raw, and visceral.

What Swim Little Fish Swim gets right is the details of life in New York in a certain meandering hipster demographic. The impromptu gatherings at Leeward’s apartment, with Christmas lights twinkling on the walls, people talking about life and the “bad karma” of capitalism, all as Rainbow is kept up long past her bedtime—these scenes are filmed with a jagged, intuitive understanding of behavior and mood that’s a lot of fun to watch. In the snippets of overheard conversation (“My fear of dinosaurs then became totally irrational…”), between the obligations of the shallow plot-points, Swim Little Fish Swim feels alive.

The ending feels confused rather than uplifting. Something awful has been revealed in the course of the film, something that contradicts the obvious themes glorifying the artist’s dedication to his art. Mary—wearing scrubs, leaning against her car and smoking a cigarette, staring up at her tiny hoped-for home in Jersey City with a touching gleam in her eyes, as though the house is a Newport mansion—emerges as the only authentic dreamer in the film.