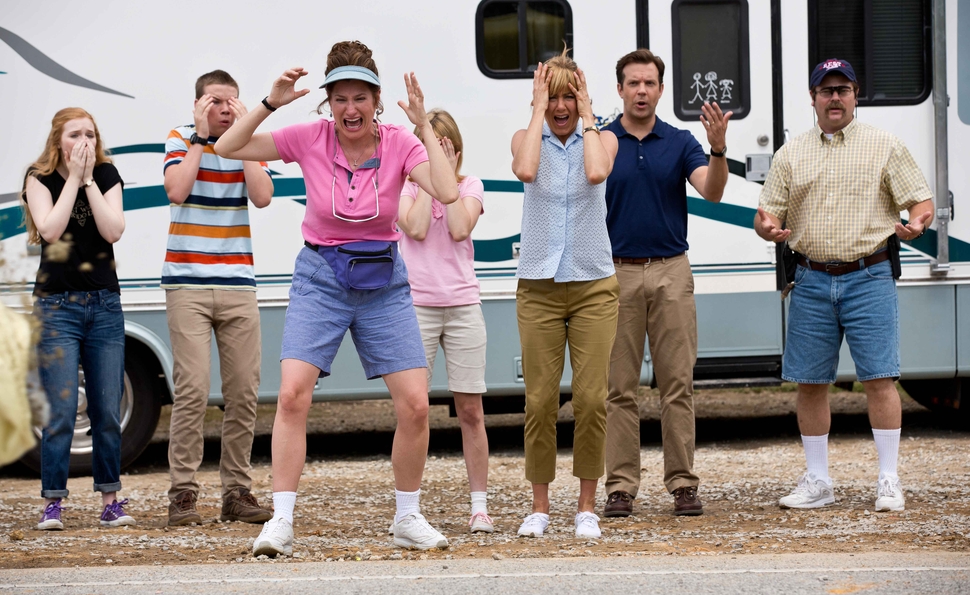 We’re The Millers puts a literal spin on the “family of choice” trope, assembling a crew of outcasts and sending them off together on a mission so trying and epic, it can’t help but forge lasting familial bonds between them. Only in this case, that family dynamic is built into the mission itself, providing a prefab template into which the movie spends 110 minutes dutifully squishing itself between comic setpieces. We’re The Millers’ eventual outcome is all but stated in the premise—hell, in the title, even—which eliminates any opportunity for narrative or emotional revelation, but provides a sturdy enough base for the film’s Griswoldian take on international drug smuggling.

Jason Sudeikis plays ersatz patriarch David, a middle-aged schlub who spends his days selling weed to clients who have the families and careers he’s forgone in favor of a single, no-strings-attached existence. When a couple of hoodlums steal his entire inventory, he ends up $43,000 in debt to his high-class slimeball of a supplier (a perfectly smarmy Ed Helms), who offers him the opportunity to make up his debt, plus substantial interest, by smuggling in more product from Mexico. Inspired by a “real-life Flanders” he observes sailing across the border in an RV with his cartoonishly wholesome family, David assembles a group of fellow outcasts to accompany him on his journey to Mexico as “The Millers.” Jennifer Aniston’s Rose, an out-of-work stripper facing eviction, plays wife to David and mom to Emma Roberts’ Casey, a sardonic, vaguely slutty street urchin, and Will Poulter’s Kenny, a painfully dorky kid who lives in David’s building and has recently been abandoned by his mom. Such a motley crew couldn’t possibly find a way to get along, much less pull off such a crazy scheme… or could they?

Of course they could, but first: lots of sarcastic sniping and bug-eyed slapstick as “the Millers” make their way over the border and back again, amid increasingly heightened comedic premises as the miles roll by. To its credit, We’re The Millers doesn’t pull punches with its hard-R comedy, which it’s able to do since its central family isn’t an actual family: David trying to cajole Kenny into fellating a bribe-seeking Mexican police officer, or Rose and Casey teaming up to instruct Kenny on the particulars of tongue-kissing, might not play so well among blood relatives. But in providing ever-more-extreme challenges for the faux-family to navigate, the film indulges its share of comic contrivances. The worst of these center on the Millers’ encounters with the Fitzgeralds, a much more genuinely wholesome set of RV denizens defined by their potential to expose the Millers’ farce: Nick Offerman’s on-hiatus DEA agent Don (essentially a meeker spin on Offerman’s Parks And Recreation character, Ron Swanson) and Kathryn Hahn as his oppressively inquisitive, oversharing wife Edie. And once a spurned Mexican drug lord named Pablo Chacon (Tomer Sisley) enters the picture, things get even more predictably unpredictable.

But while the setups are often laughably forced—two words: “weed baby”—the script navigates its way out of them relatively gracefully, and sometimes hilariously. (The major exception is Rose saving everyone from Pablo with an elaborate striptease sequence that seems conceived mainly to give Aniston a venue to show off her kale-honed stripper physique.) And given the integral role marijuana plays in the plot, We’re The Millers admirably abstains from easy pothead humor; in fact, it might be the only weed movie where no one actively partakes.

Sudeikis’ character is the sticky resin that keeps We’re The Millers’ forgone conclusion from sliding together as naturally as it should. David’s sad-sack introduction doesn’t do enough to excuse the fact that he acts like a heel for most of the movie, treating his companions like employees at best and burdens at worst—or as he tells them, “This isn’t The Brady Bunch. I’m Marky Mark, and you all are The Funky Bunch.” While Rose, Kenny, and Casey forge tentative bonds of friendship out of a few small, relatively organic moments, David is motivated only by greed, and to a lesser extent, his attraction to Rose, which is kept ill-defined until the moment it becomes necessary to define it. His increasingly loathsome behavior culminates in a particularly detestable moment of abandonment that the film unsuccessfully attempts to rectify with some last-minute heroism and a well-timed musical cue. But it’s in keeping with the film’s humor, which tends toward the mean-spirited and cynical throughout—which ultimately makes that inevitable happy ending ring all the more false.