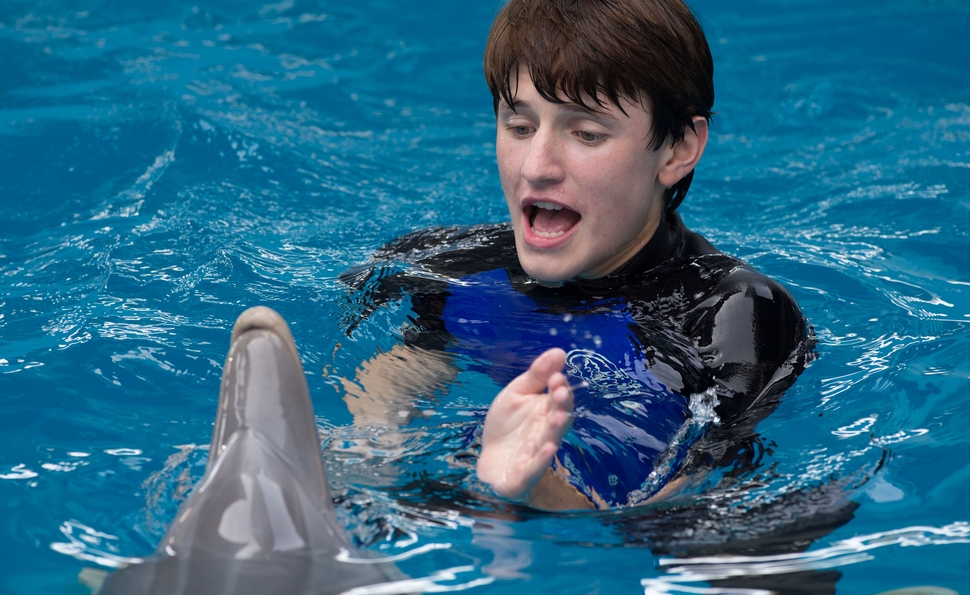 At the very least, Dolphin Tale and Dolphin Tale 2 director Charles Martin Smith deserves credit for modesty. Where M. Night Shyamalan notoriously cast himself in Lady In The Water as a literary genius whose keen insights into the universe would benefit all humanity, Smith gives himself a slightly less prestigious role in Dolphin Tale 2, as an OSHA inspector who does things like tell animal advocate Dr. Clay Haskett (Harry Connick Jr.) to clean up the peeling paint around his aquarium, so it doesn’t get into the water.

Sadly, the moment when Haskett points out the peeling paint to the annoyed Clay is representative of the movie as a whole. In an earlier, more blessed era, Smith tussled with the animal kingdom by scripting and starring in the classic adventure film Never Cry Wolf; in a later, less blessed era, he directed the surprisingly grim Air Bud. Here, as writer-director, he doesn’t seem to realize that it isn’t enough merely to continue the story of Winter, the real-life injured dolphin with a prosthetic tail who inspired the surprise hit 2011 family film Dolphin Tale. He needs to make something cinematic as well.

This superfluous sequel to an agreeable-enough time-waster—which itself wasn’t exactly screaming to be made in the first place—catches up with Sawyer Nelson (Nathan Gamble), the everyday hero who helped save Winter in the first film. Now, he’s a confident, androgynously pretty teenager, given the opportunity of a lifetime to spend a magical, all-expenses-paid summer learning aboard a ship full of world-class scientists. But Sawyer’s education takes a back seat when Winter’s exceedingly old dolphin partner dies, hurtling Winter into a deep depression. Winter just mopes around, all sad and shit, depressing aquarium visitors who come to see a heartwarming exemplar of triumph over adversity, not an underwater sad-sack.

The death of Winter’s partner has a snowball effect that leads to an epidemic of sadness around the aquarium. While devastated by the dolphin’s death and the effect it has on Winter, Haskett has to deal with his bosses, who are all for healing and releasing wild animals, but also have an eye toward attendance that makes them more pragmatic than Haskett would like. Even young Sawyer is deeply bummed. The movie itself seems to be in mourning, which turns a crowd-pleasing look at a plucky dolphin and the humans who refused to give up on her into a joyless dirge. In the first film, a group of unlikely heroes saved Winter from the world’s cruelty; here, the human cast needs to be saved from the dolphin’s bummer vibes.

Various schemes and proposals are floated to find Winter a replacement partner that will renew her lust for life, but every forward step is followed by a step back, even after Dr. Cameron McCarthy (Morgan Freeman), the eccentric genius who designed Winter’s prosthetic tail in the first place, is brought back into the fold to lend his expertise to the situation. Though his performance essentially defines the term “contractually obligated,” Freeman brings a peppery vitality to the role that occasionally rescues the film from unconscionable blandness.

Dolphin Tale 2 feels less like a movie than a massive information dump. Scene after scene features characters dryly discussing Winter and the aquarium’s condition in ways that are more educational than entertaining: The film might as well come with homework and discussion questions. Sequences of dolphins gliding through the water, joy and beauty in motion, are the reason films like this exist. But Dolphin Tale 2 makes audiences wade through endless oceans of tedium for those scattered, fleeting moments of grace.