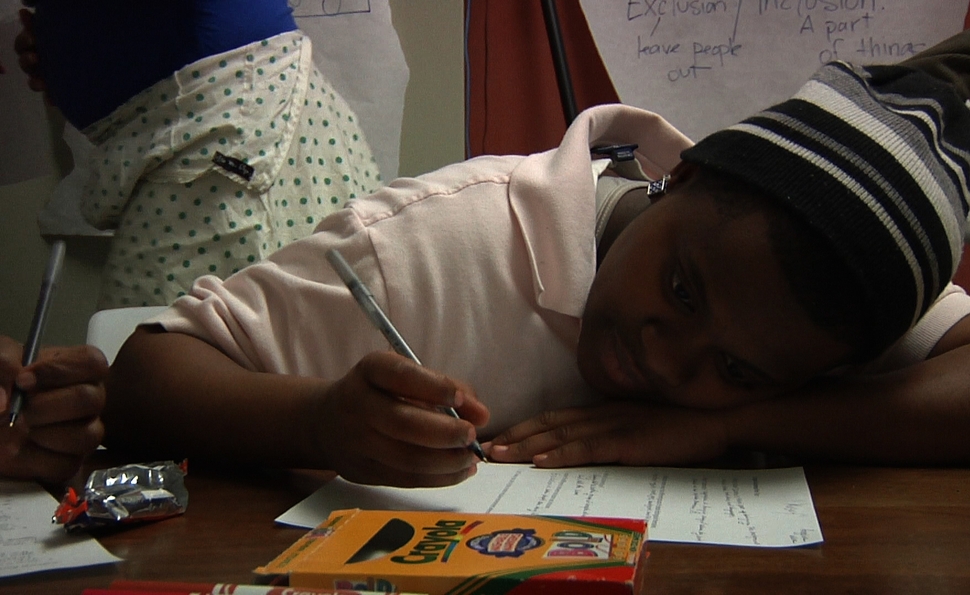 Good intentions fairly drip off the screen in The Homestretch, an earnest but hazy profile of three young Chicagoans struggling to become self-sufficient while depending on the city’s social safety net—or the kindness of others—for the shelter and sustenance their own families failed to provide them. The film comes from Kartemquin Films, Chicago’s venerable not-for-profit documentary company, responsible for unforgettable films like Hoop Dreams and this year’s Life Itself, among dozens of others going back 48 years. But few documentaries achieve the degree of persuasion those films have, wherein the stories are so compelling, and so unimpeachably skillful in the telling, that viewers can appreciate them without stopping to ponder the filmmakers’ aims.

Homestretch director/producers Anne de Mare and Kirsten Kelly seem to be working from an altruistic desire to convince viewers that youth homelessness is a bad, sad thing. Who could disagree? It isn’t a documentarian’s job, necessarily, to prescribe remedies for the social problems she reports. But de Mare and Kelly never get as far as framing the scope of the problem in any real way, never mind suggesting whether, say, the city should allocate more funding for shelters or whatever. They speak with Jake Bradley, a shelter administrator who explains the difficulty of demonstrating to bean-counters that providing at-risk adolescents with a safe place to sleep offers a measurable return on investment. They interview Pat Scott, the Homeless Liaison at Prosser Career Academy, a vocational public high school, who says that taking care of the 29 homeless students for whom she’s currently responsible feels overwhelming. No doubt. But are either of these things surprising?

As the film opens, Anthony and Kasey—last names withheld—are both residents at Belfort House, a 24-bed transitional living program for youth. Anthony has a young child in Indiana, and is working to earn his G.E.D. while on probation for robbery. Kasey is an outwardly confident, motormouthed woman whose grandmother drove her out of her house for being a lesbian, and who treats her anxiety with pot and booze. It’s unclear where Kasey’s mother is, but given how noncommittal she is about showing up for Kasey’s high-school graduation, it’s safe to assume Kasey can’t rely on her for much. “Don’t play with me, Fat Lady!” Kasey snaps when talking to her mom on the phone.

De Mare and Kelly follow Anthony and Kasey as they move on from Belfort House—Anthony by “graduating,” Kasey by being expelled for curfew violations—to their own subsidized apartments. They’re both appealing subjects: He’s charming and charismatic, and she’s smart as a whip. It’s easy to imagine their alternate-universe doppelgängers, the ones born into lives of just a modicum more advantage, becoming successful at whatever they chose to do. As things are, it seems like progress when Anthony is accepted into Year Up, a career skills-building program where he learns how to give corporate presentations and send meeting invitations in Microsoft Outlook—how to be soulless and boring, basically. And a scene wherein Anthony and his Year Up classmates race to see who can tie a necktie the fastest offers hope their personalities might survive in Dilbertville.

The film’s third subject, Roque, is a burly, shy high-school senior who’s been taken in by one of his teachers, Maria Rivera, and her husband. After a clip of him performing as Prince Hamlet, he tells the camera he relates to the character because his father left and this mother promptly took up with another man, leaving him to fend for himself. But Roque isn’t homeless, really. Rivera has welcomed him into her family, and she appears to be a more loving and tireless role model for him than many kids’ biological parents. As she explains, her own mom and dad divorced when she was very young, leaving her mostly on her own. From her perspective, she’s investing in Roque as a human being, and she fully expects him to pay forward the kindness she’s shown him, once he’s acquired a foothold in life.

Besides inviting him to share her home with her husband and her daughters, Rivera makes a heroic effort to get Roque into college, which means first getting him a legal, state-issued I.D. card, which his own undocumented parents are unwilling to assist with, for fear of deportation. She even enlists one of her own college professors at Northeastern Illinois University to advise Roque on his application and to go knocking on doors on his behalf when it’s initially rejected—a hookup that seems to put him in the top 1 percent most fortunate of homeless youth with collegiate ambitions. Roque seems like a sweet, likable kid whose biological parents let him down. It’s easy to empathize with him and hope for his success. But as the poster young adult for youth homelessness, he’s a problematic choice.

The Homestretch is visually unremarkable. Perhaps because some interviews were shot in low-lit rooms with windows, the backgrounds visible behind the subjects’ heads are often blown-out and distorted. That becomes an unfortunate metaphor for the entire enterprise: Kasey, Anthony, and Roque are in focus, but the landscape de Mare and Kelly seek to survey never resolves into a clear picture. To tackle the task they’ve assigned themselves, they need an editorial sense as merciless as their hearts are generous. You must be cruel to be kind, as Hamlet said, and cruelty eludes them.