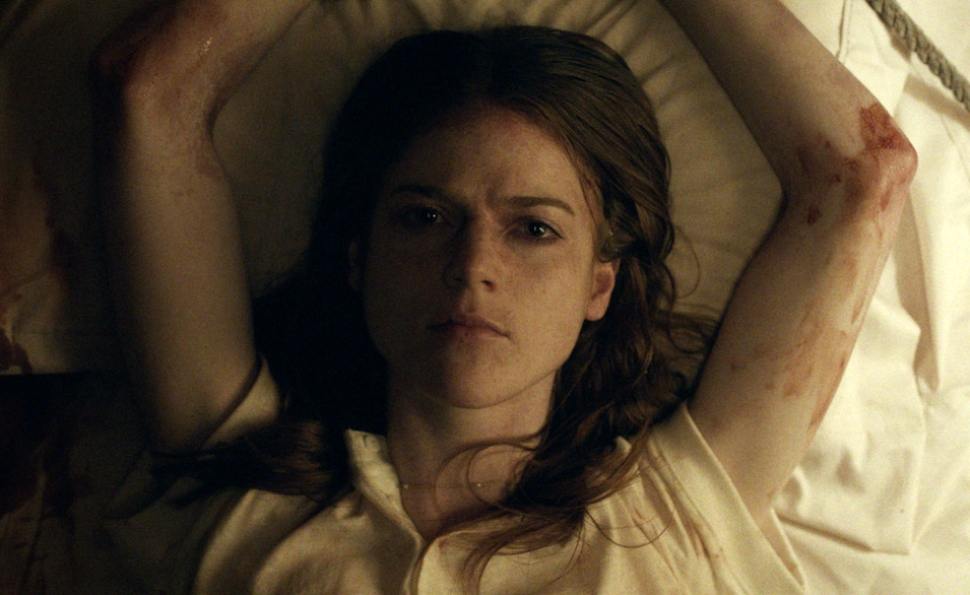 There are two movies rattling around in Leigh Janiak’s debut feature, Honeymoon, and they’re both pretty impressive. One of them is a singularly creepy horror film, very much indebted to Jack Finney’s The Body Snatchers and its numerous descendants, but ringing enough inventive changes on the formula to remain effective. The other is a penetrating examination of the ways in which a relationship metamorphoses after marriage—or, more accurately, it’s a penetrating examination of the ways in which people fear a relationship may metamorphose after marriage. But these two fine pictures only occasionally work in unison. The latter is clearly intended to serve as subtext for the former, and does… but only up to a point. Exciting plot developments (especially in the late going) frequently bear little apparent relationship to what Honeymoon is ostensibly trying to say, while the film’s sharpest insights often don’t require the overt horror material at all. It’s a frustrating disjunction, but one that can easily be chalked up to inexperience. What’s important is the promise that’s dually demonstrated.

Set entirely (apart from a quick video flashback to the wedding) at a secluded lakeside house, Honeymoon initially depicts the newly marital bliss of Bea (Rose Leslie, best known as Game Of Thrones’ Ygritte) and Paul (Harry Treadaway, who’s currently playing Victor Frankenstein on Penny Dreadful). Their sexual appetite is extremely healthy, to put it mildly, and the dynamic between them is playful, mischievous, at times even lovingly sadistic. They keep hearing odd noises during the night, though, and beams of Close Encounters-style light play over them while they sleep. After one such incident, Paul finds Bea standing naked in the woods in some sort of trance, and from that point forward, while she remains as superficially attentive as ever, something about her seems… off. The sharp edges of her personality seem to have been sanded away, and her nonstop lust gets replaced by clichéd excuses about headaches. Most disturbing of all, Bea can’t remember how to make coffee or French toast, and she keeps stumbling over common English idioms, telling Paul she needs to “take a sleep,” and referring to her “clothes box” (suitcase).

It isn’t terribly difficult to guess what’s happened to Bea, especially once she and Paul bump into another woman (Hanna Brown) who seems to be suffering from the same weird malady. That’s why the subtextual anxiety is so crucial, and Janiak’s savviest decision has Bea not suddenly become an unemotional zombie. Instead, she seems almost manically protective of Paul, and vestiges of the old Bea keep surfacing to do battle with whatever she’s become as a result of her sleepwalking episode. Efforts to interpret her behavior as a reflection of ordinary relationship issues, however, get increasingly difficult as the film goes on, with the story’s ghastly, tragic conclusion founded on a misunderstanding that works magnificently on the surface level, but has zero real-world resonance. Leslie’s impassioned, before-and-after performance goes a long way toward resolving these anomalies (suggested tagline: “You know nothing of me, Jon Snow”), and Janiak handles both horror and drama ably enough to suggest that she’d excel at either genre. She hasn’t yet mastered the combination, but it’s only her first try. Give her time.