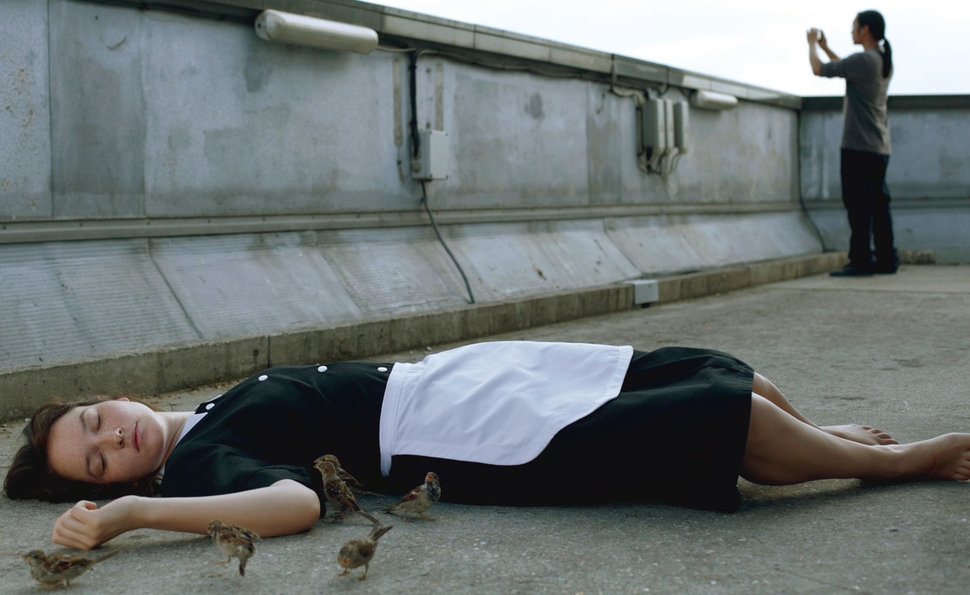 Business travelers stay in nice hotels, with comfortable beds, cable television, maid service—and a persistent feeling of frustration that they have too much work to do to enjoy the places they go. Maids in business hotels make beds, pick up the crumpled receipts that miss the wastebasket, and reset the room every day so their residents are undisturbed. People on business trips would love to have the luxury to spend a whole day doing nothing but swimming in the pool, drinking at the bar, then falling asleep watching a movie on the flat-screen TV. The maids would just love to sleep in hotel beds instead of making them.

Pascale Ferran’s offbeat drama Bird People is about a businessman and a maid, Gary (Josh Charles) and Audrey (Anaïs Demoustier), whose paths cross over the course of a couple of days at a hotel near a Paris airport. Gary is just passing through on his way to Dubai, where he’s supposed to close a major deal on behalf of his California-based technology company. Audrey cleans rooms because she prefers peering into other people’s lives over the pressure of being a college student and pleasing her parents. In the first half of Bird People, Gary is seized by a paralyzing anxiety attack, and reacts by cutting all ties with his company and his family, through a series of testy phone calls and Skype conversations. In the second half, Audrey’s natural curiosity leads her to try and piece together the mystery of Gary’s life, which she can do because hotel guests rarely want to acknowledge that their maids might be people, with ears, eyes, and private thoughts.

Audrey’s half of Bird People contains a fantastical element (she turns into a sparrow for a little while) that doesn’t feel out of place, because really, this whole movie is whimsical, musing on what it would be like not to have to use a hotel only as a staging area for work, or as a place to rest on the way to somewhere else. In the opening scene of Bird People—which serves as an overture for the whole film—Ferran moves the camera through a group of commuters, listening in on their worries as they mull over the numbers and the obligations governing their lives. This lays out what Bird People is up to: not just nosiness, but using voyeurism as both an expression of a common yearning to escape and as a way to understand that nobody has it easy.

The way Ferran and her co-screenwriter Guillaume Bréaud explore all this distinguishes the movie. Superficially, Bird People seems to shift from one mode to another halfway through, with the Gary story playing as an intense psychodrama, and the Audrey story as a literal flight of fancy. But both halves are quietly observational—watching Gary and Audrey, and watching what they watch. Even before Gary has his breakdown, he’s haunted by the sight of a car accident, not long after his cabbie asks him if he thinks Paris is beautiful, which he has trouble answering, since he knows he won’t really get to see Paris on this trip. And while Gary doesn’t transform into a bird, he does do some virtual traveling: tracking the path of the plane he didn’t take, and peering past his wife to the bird on the windowsill behind her during a Skype call.

The scene of that call—which lasts for a good 10 to 15 minutes of Bird People, representing about half a day’s worth of conversations—is pivotal to Bird People’s overall thrust. To Gary, quitting his job seems “obvious,” but it’s every bit as obvious to his colleagues that he “cannot not” go to where he’s supposed to be. Just as the opening scene of Bird People shows people too burdened to live like the birds they see flapping outside their windows, so Gary discovers that abandoning all responsibilities entails a lot of conversations with lawyers and family. The emotions evoked by Bird People should be familiar to anyone who ever stared out the window of a classroom, imagining what it would be like to leave school, hop on a bike, and go for a ride around the mostly empty neighborhood. This is a wisp of a movie, and yet it deals with an experience so pervasive that it’s usually barely acknowledged—this restlessness people feel to fly off to somewhere else where they can be unsatisfied.