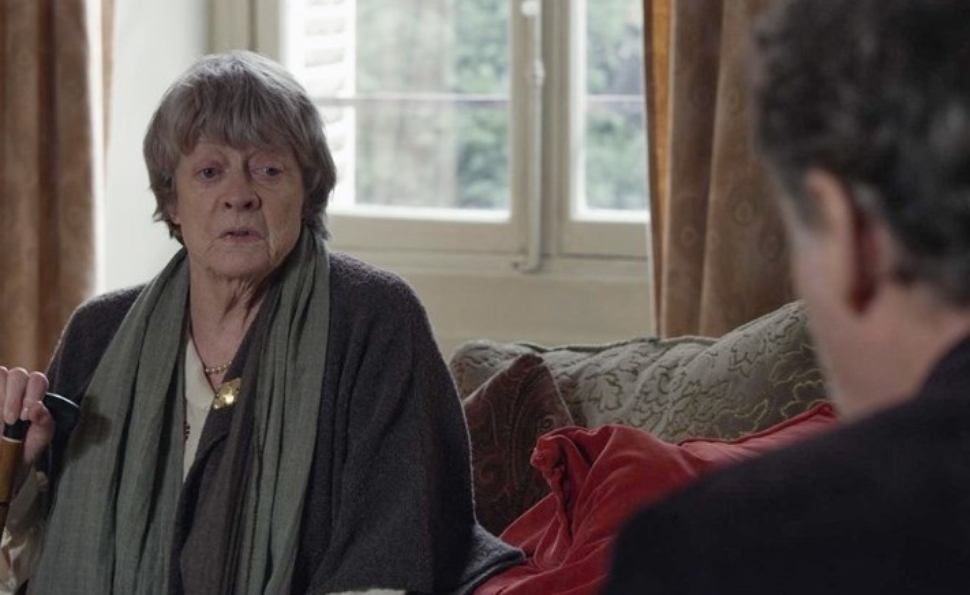 The opening of My Old Lady suggests that the directorial debut from veteran playwright Israel Horovitz will be a fun, French-style romp about a real-estate disagreement between two characters played by eminently watchable actors. First, the camera finds Kevin Kline as Mathias Gold, a broke, twitchy New Yorker who breezes into a Paris apartment he inherited from his late, estranged father. He immediately starts plotting to sell it. Then the camera (and Mathias) discover Dame Maggie Smith as Mathilde Girard, a 92-year-old English woman currently living in the apartment under the longstanding protection of a viager, a uniquely French agreement in which the seller of a property (Mathilde) continues to reside in it while collecting a monthly payment from the buyer (Mathias’s dad, now Mathias), who can only occupy the property following the seller’s death. It’s the sort of weird legal arrangement that makes absolutely no sense to an American like Mathias. But the fact that he’s forced to deal with it initially gives Kline free rein to work in the frazzled-and-angry section of his comedy spectrum (“What I inherited was a 2,400-euro-a-month debt?” he sputters), while Smith gets to make wry comments in that way only Maggie Smith can. “I’m 90,” she quips. “Subtlety is not something that interests me.” Oh, she’s already sounding like the Dowager Countess from Downton Abbey. This is going to be a delight!

But My Old Lady isn’t the tart slice of dessert that its initial scenes suggest it might be. In fact, it only becomes truly compelling in its second half, as Horovitz drives toward darker material and farther away from the light.

In a recent New York Times piece, Horovitz—making his directorial debut at age 75  by adapting this screenplay from his 2002 play—noted that My Old Lady is, like life, neither comedy nor tragedy. “It’s both of those things,” he said, “in rapid alternation.” Tonally, My Old Lady zigs and zags awfully hard as it starts to delve into such serious matters as Mathias’ alcoholism, suppressed grief, and long-held family secrets, while still chugging forward with the matter of what’s to be done with the apartment. What happens in this movie doesn’t feel like real life, exactly; the revelations are too contrived and the exchanges too theatrical. But thanks to Horovitz’s controlled direction and solid work from Kline, Smith, and especially Kristin Scott Thomas as Mathilde’s simultaneously stubborn and vulnerable daughter Chloé, the film achieves some affecting moments.

Horovitz certainly makes an effort to translate his story into a more cinematic, visual language, often illuminating his subjects in a nostalgic, almost wistful Parisian-apartment glow that makes even more sense as the details of their backstories are disclosed. In one scene, Horovitz frames Kline so his head falls just below a wall sconce in the distance, its filtered light a symbol of the scattered realizations bouncing around in Mathias’ head.

But as with so many classic stage plays, what ultimately gives My Old Lady its structure and heft are the moments when two of the actors get stuck in a room together, and let the dialogue fly. As Mathias, Kline is intentionally hard to like and difficult to pin down emotionally; he’s the kind of guy whose internal timer seems perpetually set for some sort of meltdown. Thomas plays an adult who, like Mathias, is still attempting to graduate from a childhood of neglect. Her Chloé is emotionally all over the place, too, but in a way that feels more anchored to reality. Kline is good here, but he’s definitely acting. Thomas, on the other hand, inhabits.

The fact that Mathias has inherited a new sense of obligation instead of a lottery ticket is only the first of many truths unveiled in My Old Lady. Some of those truths are so obvious, the audience will see them coming long before they arrive. But the plot points and the ramifications of that puzzling viager aren’t what matter here. The characters’ fragility—the way it’s so easy, so early in life, for people to begin the process of breaking—will resonate most.