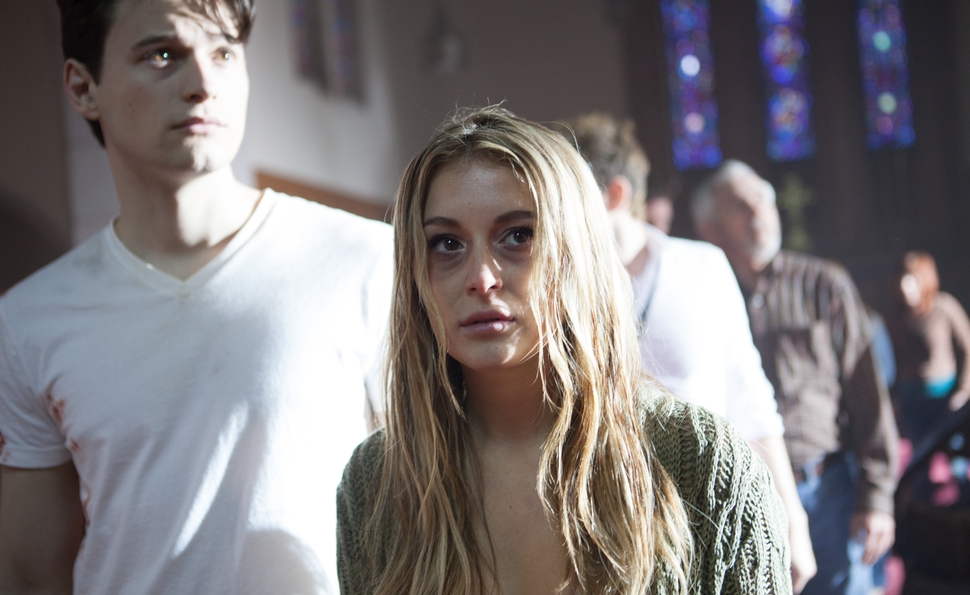 The central conceit behind the new faith-based horror-thriller The Remaining is so simple and commercial, it’s a wonder it hasn’t been done before on a similar scale. It’s essentially a Christian variation on Cloverfield that replaces the free-floating terror and culture-wide anxiety surrounding a giant monster attack in New York with something similar, but much more evangelical: the free-floating terror and culture-wide anxiety of post-Rapture hell on earth.

Like Cloverfield, The Remaining filters the insanity of a culture-wide collapse and beastie mega-attack through the screens of video cameras and cell phones, in an attempt to provide a you-are-there, immersive take on what it feels like when the world cracks open and monsters run wild. The Remaining is partially a found-footage film like Cloverfield, which lends it immediacy. But large chunks of it are also filmed conventionally, which lends it a plausibility: The many scenes shot from outside the characters’ perspective frees the film from having to explain why people in the midst of winged-demon attacks don’t throw down their phones and cameras, and run for their lives. Still, The Remaining winds up being a weird, mutated hybrid creature: part horror, part thriller, part evangelizing tool, part spooky genre movie.

At least it’s a cut above most Christian movies, in that it was made with a sense of craft. But it gets off to an unpromisingly generic start as it follows a group of interchangeable young people as they get ready for the wedding of one of their friends: Alexa PenaVega, currently working both sides of the secular/religious divide, here and in her slightly more risqué turn in Sin City: A Dame To Kill For. Alas, the wedding happens to fall on the least convenient day in all eternity, the simultaneously glorious and tragic day when God calls the faithful back to him and leaves the rest (let’s call them “The Leftovers,” or, alternately, “The Remaining”) on earth so they can think long and hard about the consequences of their faithlessness while avoiding fires, planes falling out of the sky, and intermittent winged-demon attacks. Honestly, any wedding planners worth their salt would advise their clients to schedule their wedding at least a week in advance of a worldwide cataclysm that will result in the Rapture-associated absence of many of the guests.

The groom’s godly parents are called to Jesus, but the central group of friends are, to coin a phrase, left behind, no doubt because they dance suggestively, drink alcohol, and use terms like “wingman.” Also, while some of them considered themselves good people, or “spiritual,” they aren’t worthy of being called up to heaven, because that goodness and spirituality didn’t manifest in regular church-going and a personal relationship with Christ.

The Remaining doesn’t take off until the Rapture happens. Special effects have advanced to the point where a relatively low-budget film can at least convincingly suggest the gothic horror and stampeding insanity of a post-Rapture hellscape. Also, like Cloverfield, The Remaining is savvy about using an aggressive, even oppressive sound design and inspired use of offscreen space to suggest unimaginable horrors. The filmmakers understand the power of inference, and manage a number of sharp scares along the way. The film is well-directed by Casey La Scala, whose intriguing résumé includes both a directing credit on the poorly received 2003 skateboarding exploitation movie Grind and an executive-producer credit on Donnie Darko. But the film slows to a halt every time it stops being an atmospheric depiction of a world gone mad and starts earnestly preaching the gospel, most shamelessly in a scene where a pastor who has been left behind delivers the most important sermon of his career, to the audience as much as to the weary survivors.

As a setting for a genre movie, the end-times prophesied in the book of Revelations is a natural: dramatic, dark, and full of terrifying ghouls and images out of the worst fundamentalist nightmares/fantasies. But whenever it becomes apparent that the genre aspects are window-dressing for blunt sermonizing that can be reduced to a simple directive to “choose God,” the film’s overachieving sense of craft dissipates, and it becomes clumsy and blunt.

The Remaining benefits from the low standards that invariably accompany Christian movies, even though its inability to organically integrate its sometimes-strident sermonizing suggests that the phrase “faith-based horror film” might still be an oxymoron. Still, as Christian knock-offs of secular films go, The Remaining is surprisingly respectable. At the risk of crazily overrating the film, The Remaining has to qualify as one of the most stirringly adequate, totally acceptable explicitly Christian horror movies ever made.