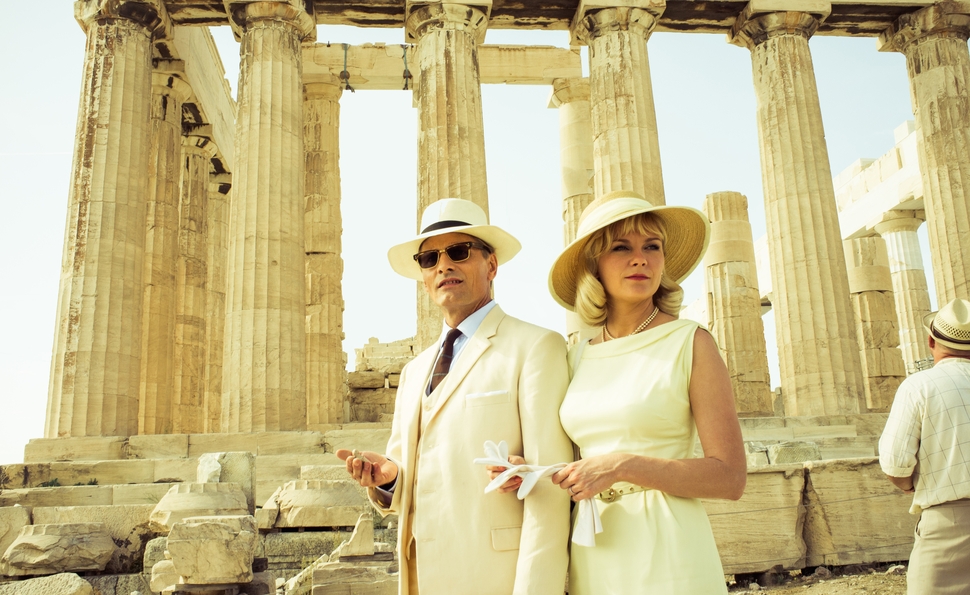 The Two Faces Of January

The byzantine plots, sociopathic schemers, and rich psychological shading of Patricia Highsmith’s novels have always served the movies well, and vice versa. The list of winners is impressive: Alfred Hitchcock’s Strangers On A Train, Claude Miller’s This Sweet Sickness, and Tom Ripley adaptations in French (Purple Noon), German (The American Friend), and English (The Talented Mr. Ripley). Highsmith’s 1964 thriller The Two Faces Of January—previously made into an obscure 1986 West German film—isn’t generally regarded as one of her best works, but screenwriter Hossein Amini (Drive, The Wings Of The Dove, Snow White And The Huntsman) nonetheless spent years pursuing the project, and finally wound up making it his directorial debut. While his passion doesn’t feel fully justified by this particular story’s low-key intrigue, he does at least succeed in conjuring up some old-school Highsmith atmosphere, which feels positively luxurious in the wake of all the recent brusque, staccato Liam Neeson vehicles.

Like many of Highsmith’s novels, The Two Faces Of January features Americans in Europe. Businessman Chester MacFarland (Viggo Mortensen) and his much younger wife, Colette (Kirsten Dunst), meet an expatriate tour guide named Rydal (Oscar Isaac) while visiting the Parthenon on vacation. Initially, Rydal looks pretty suspicious; he’s seen casually ripping off tourists by falsely translating prices at market stalls, and pocketing the difference. But Chester has come to Greece in part to hide from angry folks he swindled in the States, and when a detective (David Warshofsky) tracks him down at his hotel, the ensuing struggle results in accidental death. Rydal, stopping by the MacFarlands’ room at the wrong moment, gets dragged into the couple’s desperate flight from justice… though it soon becomes clear that he’s motivated to help not by the money Chester offers, but by Colette’s considerable charms.

At roughly this point in the narrative, The Two Faces Of January starts to falter a bit, at least onscreen. (The title, a blatant Janus reference, refers to both Chester and Rydal, neither of whom is much for loyalty.) Colette seems at first to be an equal, but while Dunst looks fantastic in her 1960s outfits, she’s ultimately given very little to do apart from serve as a trophy for the two men to fight over. And whether it derives from Highsmith or Amini (who significantly revised portions of the novel’s third act), the movie’s emphasis on Chester as a symbolic father figure for Rydal gets progressively cheesier in the home stretch, culminating in an ending that feels way too pat. Technically, Mortensen could be Isaac’s dad (they’re 20 years apart), but the former seems too young and the latter too old for the desired dynamic.

They sure know how to glower at each other, though. Movies that fail to satisfy can still be thoroughly pleasurable en route to that final disappointment, and The Two Faces Of January thrums along nicely for long stretches, making the most of spectacular scenery (the characters head for Crete, then to Istanbul) and sustaining an undercurrent of wary tension. As Colette regrettably fades into the background, Chester and Rydal engage in a prolonged mental war of attrition, culminating in a fantastic, wordless scene in which the two sit together at the same table shortly after one has openly attempted to murder the other. (Breaking Bad fans should imagine the final-season confrontation in Hank’s garage, but with zero dialogue.) For a first-time director, Amini demonstrates considerable skill both with actors and with the camera, giving the film a pungent balance of visual elegance and moral seediness. It’s unclear why he was so keen to make this Highsmith novel, but he could have chosen a much less reliable template for his first effort.

(The Two Faces Of January is currently available through streaming services. It will be released theatrically on September 26.)