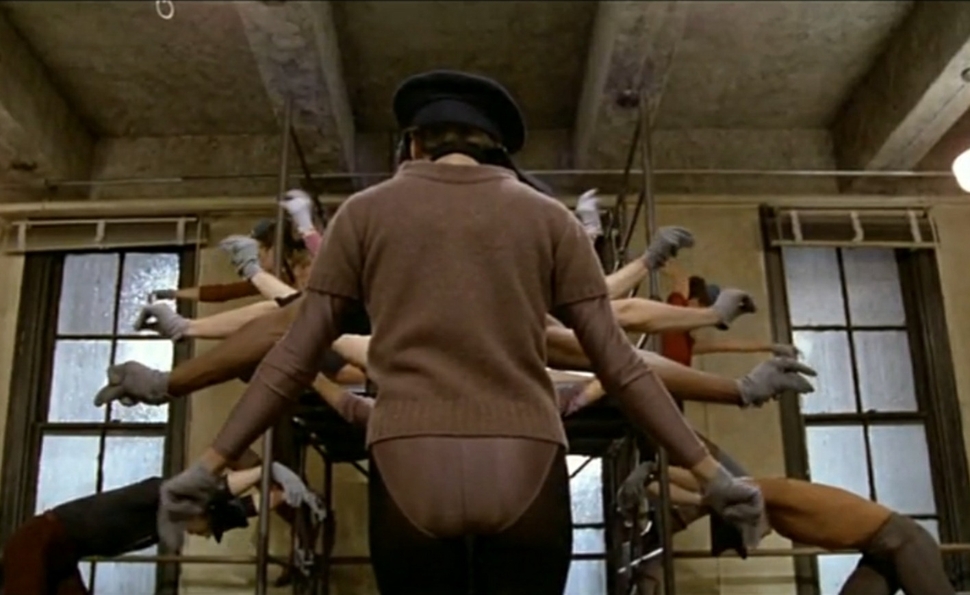 Nearly every time Roy Scheider is on the screen in Bob Fosse’s 1979 musical-à-clef All That Jazz, his character, Joe Gideon, is dressed in black and smoking a cigarette. The cigarette is the key to understanding Joe, and to understanding what Fosse is saying about himself with this movie. Joe’s cigarette is nearly always down to the butt, with just a few puffs left before he crushes it under his boot-heel and lights up another. The cigarette is Joe. Here’s a man who’s almost burned out, but who wakes up each morning, pops pills, takes a drink, forces a weak smile, and says, “It’s showtime, folks.” Joe starts each day already down to his last few puffs.

All That Jazz is one of the most self-indulgent movies ever made—but blessedly so. Joe Gideon is an undisguised version of Bob Fosse: a choreographer and director, working in the theater and in film, juggling women in any spare minutes he has between the rehearsal hall and the editing room. In All That Jazz, the women are Audrey Paris (played by Leland Palmer, representing Fosse’s wife, Gwen Verdon), and Kate Jagger (played by Ann Reinking, representing Fosse’s girlfriend, Ann Reinking). While Joe struggles to finish cutting his biopic of a controversial comedian, similar to Fosse’s Lenny, he’s simultaneously developing a sexy Broadway showcase for Audrey, similar to what Fosse did for Verdon with Chicago. Meanwhile, he’s alienating Kate with his promiscuity, disappointing his daughter Michelle (Erzsébet Földi) with his absences, and pushing himself toward a heart attack and heart surgery very much like what Fosse went through in the mid-1970s.

None of this is pretty. Fosse and his co-screenwriter, Robert Alan Aurthur, bounce around Joe’s life, drawing on Fosse’s own experiences as a young dancer in burlesque houses, and his battles with overly facile composers and narrow-minded backers. Back when All That Jazz came out, critics debated whether the movie was self-aggrandizing, and indeed Scheider’s portrayal of Joe can be read as an exercise in justification. In one of All That Jazz’s central scenes, Fosse cuts the sound as the company of Joe’s musical comedy laughs their heads off during a read-through, while Joe and Audrey lock eyes, unsmiling. Fosse is taking the audience inside Joe’s bubble, explaining that a man who may come across as a cold crank is in fact just a perfectionist who sees no creative upside in being clapped on the back.

That read-through scene—which ends with Joe snapping his pencil and having a massive coronary—is also an example of how effectively Fosse uses cinema’s expressive qualities. All That Jazz is really two musicals. When Joe is fighting for his life during the last 45 minutes of the movie, Fosse stages one elaborate dream-sequence/musical number after another, with the women in Joe’s life singing songs that castigate him for being such a shit. But the first hour-plus of All That Jazz is more like a documentary about the making of a Broadway show, beginning with a massive open call for dancers—where Joe watches hundreds of nearly indistinguishable men and women in leotards leap and twirl in unison—and continuing as he tweaks individual performances.

One of the most famous numbers in All That Jazz is the “air-otica” sequence, where Joe shapes a snappy, poppy, double-entendre-filled song about air travel into a sensual, half-nude, pan-sexual ballet. The performance is shown in full, but with the dancers in workout garb, and with Fosse capturing the action by putting the camera right onto the floor with them, creating a “you are there” feel. For a film that features a prominent role throughout for the angel of death (embodied by Jessica Lange), All That Jazz is pretty grounded in reality.

One of the other great numbers in All That Jazz comes when Kate and Michelle perform a choreographed dance for Joe in his apartment, set to “Everything Old Is New Again.” Part of what makes All That Jazz so revealing of who Fosse was is that it doesn’t paint Joe as a raging beast or a misunderstood genius. He has people who love him, and he’s capable of feeling regret, and profound appreciation—the latter of which he shows when he’s moved almost to tears by Kate and Michelle’s simple, joyous little performance.

Joe’s great curse is that he knows everything can be improved with more time and effort—himself included. More than once in the movie, he shows his work to someone who’s exasperated with him for all the time he’s taking and all the money he’s spending, and in each case, they shake their heads, annoyed to have to admit that all his fussing has made the finished product more brilliant. A skeptic might say this is Fosse congratulating himself, but it’s really more of an explanation. It’s impossible to create something as lasting as All That Jazz without doing a lot of personal and collateral damage.

The extras on Criterion’s Blu-ray edition of All That Jazz—many carried over from earlier DVD editions—primarily focus on Fosse, and how much the movie does and doesn’t mirror his own life. A commentary track by editor Alan Heim and a selected-scene commentary by Scheider cover what it was like to work with Fosse as a close collaborator, describing how he thought carefully about how to shoot and cut his choreography on film. One of the older featurettes assembles interviews with contemporary movie and TV choreographers, who break down All That Jazz’s influence on their own work, while vintage Fosse interviews on Tomorrow, The South Bank Show, and with critic Gene Shalit all delve into Fosse’s past, his self-doubt, and his approach to cinema.

But the most insightful of the extras here is a new interview with Reinking and Földi, who debunk the myth that Fosse was a cruel tyrant, saying he was passionate about his work and compassionate toward his casts, pushing and celebrating them. Reinking says that at one point while making All That Jazz, she asked Fosse why he was painting himself in such a bad light, and he replied that viewers wouldn’t get the moral of the story if they liked Joe Gideon too much. She also says that the most recognizable element of Fosse’s choreography—the “busted” body position, with limbs cocked and bent—grew from him trying to compensate for his lack of a dancer’s build. Leave it to Fosse to turn a personal imperfection into art.