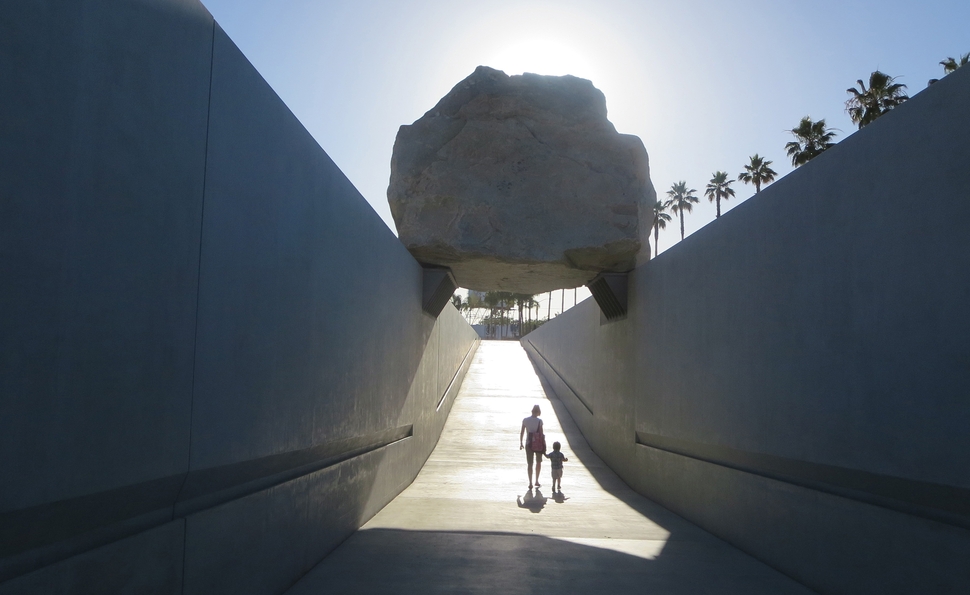 Before a 340-ton rock became the star attraction in Michael Heizer’s Levitated Mass art installation, it was sitting in the middle of the California desert. It didn’t have a name. It didn’t have $10 million in funding from obscenely wealthy donors. And people weren’t coming out in droves to gander at it, or debate its relative merits as a form of expression. It was one stone left unturned.

Levitated Mass, Doug Pray’s eponymous documentary on Heizer’s project for the Los Angeles County Museum of Art, is more entertaining than a glowing artist profile has any right to be, because Pray remembers where his subject came from. No, not Heizer—the rock. After the artist, internationally renowned for his use of negative space, decreed it the most beautiful hunk of sediment he’d ever seen, the museum was charged in 2012 with figuring out how to transport the hulking thing from the Stone Valley Quarry in Riverside, California, to LACMA in Los Angeles, where a giant crevasse had been constructed beneath the boulder’s final resting place. The solution: a 10-night, 100-mile journey across surface streets through 22 cities, carting the rock on a snail-paced, 206-wheeled contraption the length of a football field. (The carrier’s “Oversize Load” bumper sticker is a hilarious understatement.) The rolling stone’s tour makes up the bulk of Pray’s film, and the document of this spectacle is when Levitated Mass is at its most compelling.

Heizer is reclusive, and Pray waits until the movie’s final minutes to show him in action on his piece, when he amusingly dismisses the preceding rock show as merely “moving some of the components around.” Until then, it feels like the museum officials and moving crew are following a Biblical directive: Someone, somewhere, is telling them to transport this giant boulder for a vaguely defined purpose, and they do so Abraham-like, without questioning. The rousing yet humble score by folk band Akron/Family conjures more ideas of some sort of communal faith exercise, and when the movers park right in front of a church named Rock Of Salvation, it feels ordained.

Along the journey, it’s fun to watch Californians of all ages, races, and creeds come out of the woodwork to gawk at this thing someone calls art. One admirer even proposes to his girlfriend by the side of the rock. To Pray’s credit, he also interviews the people who are, understandably, peeved that a $10 million stone would have the audacity to drive through communities where so many residents live below the poverty line. “I think it’s nuts,” one woman offers. “It’s a rock. Kind of dumb.” This open, critical dialogue on the role of the arts in public life is unchiseled by pretension.

In Pray’s past documentaries, including Big Rig, Infamy, and Surfwise, he’s generally spotlighted individuals and subcultures outside the mainstream: truck drivers, graffiti artists, isolationist surfer sex gurus. Here, Pray intersperses segments on Heizer’s previous projects; Lansing, Michigan, doesn’t come out so good after allowing his sculpture “This Equals That” to fall into disrepair since the 1970s. But the majority of the focus is smartly on public reaction to his negative-space ideas, as directed at this massive object.

If anything, Pray waits too long to get to the rock: The film’s opening act lines up a bunch of rich donors to talk about why they loved Heizer’s work enough to finance its transport, a segment that isn’t nearly as illuminating as it should be. (Although it does set up an amusing moment where a benefactor praises the “California rock,” even though the rock predated the state.) Once that rock gets rolling, Levitated Mass turns into a fun, loopy portrait of one crazy idea that became a SoCal public-art cornerstone.