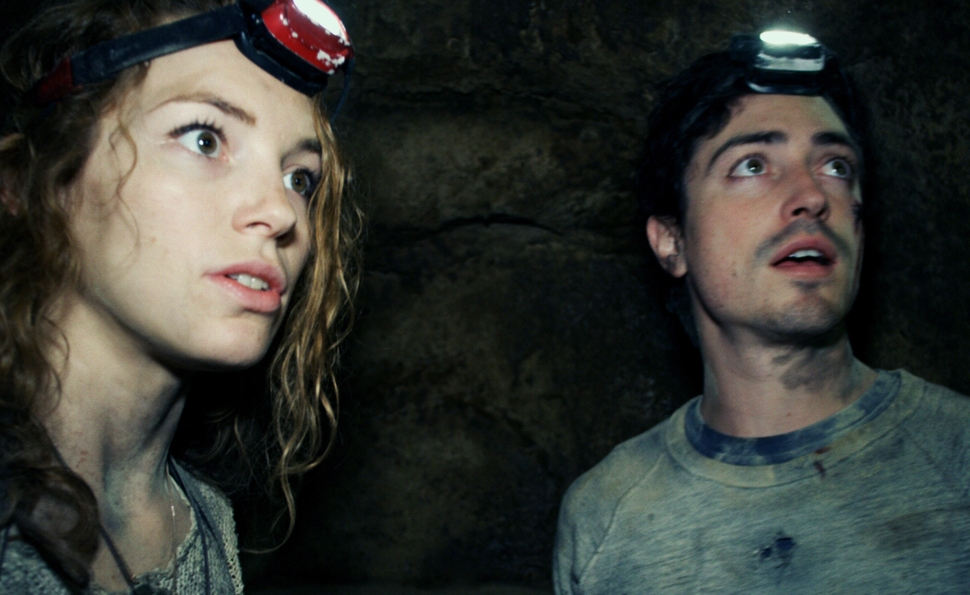 At least John Erick Dowdle, the co-screenwriter and director of As Above/So Below, is consistent. With help from his brother and partner Drew, he previously made the found-footage thrillers The Poughkeepsie Tapes and Quarantine (a remake of the Spanish horror hit [REC]) before helming the Satan-themed, M. Night Shyamalan-conceived-and-produced elevator spookfest Devil. Now the Dowdles have brought those two worlds together with As Above/So Below, a found-footage horror movie about a group of suspiciously attractive adventurers who travel deep below the earth, into the devil’s home turf, seeking a priceless artifact with supernatural powers. There, they find a life-or-death struggle for survival in which they battle sinister forces both internal and external.

The film begins in Iran with a sequence where dashing adventurer Scarlett Marlowe (Perdita Weeks) defies local law to snag a treasured artifact from a forbidden zone. The sequence is shot in classic Blair Witch Project style—all frenetic movement, hyperventilating and incoherent intensity, a feverish blur of action that’s damn near impossible to follow. As Above/So Below then resets in favor of a more conventional faux-documentary style, as Scarlett, whose brilliant but unstable father committed suicide—a revelation introduced in the first act in a way that ensures it will figure prominently in the third—convinces a group of unfortunate collaborators to join her on an expedition into the Parisian catacombs to search for a stone with supernatural powers.

A number of intrepid souls descend into the cluttered, shadowy darkness of the catacombs, but the only ones who matter are Scarlett and George (Ben Feldman), a renegade genius who does things like sneak into church towers and furtively fix ancient bells. This is both because Scarlett and George are the first two characters introduced, and because they have a sexual chemistry that suggests a subterranean make-out party isn’t entirely out of the question, no matter how desperate things get.

Scarlett and Ben are simpatico souls—daring intellectual geniuses who look like Abercrombie & Fitch models—and even though Ben insists he will only interpret Aramaic for her, he ends up following her into the catacombs. As Above/So Below takes forever to get going: The setup stretches on endlessly, and when the attractive young people finally get underground, the film is curiously non-claustrophobic.

Like The Descent, which it unfavorably recalls, As Above/So Below has a setting, so conducive to claustrophobic spooks that it shouldn’t even need to introduce supernatural elements to be scary. Yet after a certain point, the film enters the realm of the supernatural and phantasmagorical, though it’s unclear throughout whether the visions the underground explorers encounter are real, or figments of their delirious, fear-addled imaginations. Unfortunately, those visions suggest the dream sequences in lesser Nightmare On Elm Street movies: cheap scares wedded to even cheaper psychology, revisiting formative traumas as a radical form of horror-movie therapy.

As Above/So Below purposefully generates a certain air of mystery by keeping the exact nature of its protagonists’ experience enigmatic, but for a film that takes place underground in tightly enclosed spaces, it’s surprisingly thin on suspense and palpable physical danger. Scarlett’s regularly deployed magical healing stone represents a deus ex machina that similarly undercuts the suspense: It’s hard to be too concerned about the safety of people who possess a magical healing stone, and other than Scarlett and George, the other members of the luckless party are so poorly differentiated that it’s difficult to even tell them apart, let alone invest in their survival.

The protagonists keep plunging further downward in their counterintuitive quest to escape their downward spiral and reach land, and a movie that never had much promise in the first place keeps spiraling further and further from redemption. Deep into their downward travels, the gang encounters the infamous words “Abandon hope all ye who enter here” from Dante’s Inferno; the same advice holds true for audiences of this alternately deathly dull and shrilly melodramatic film.