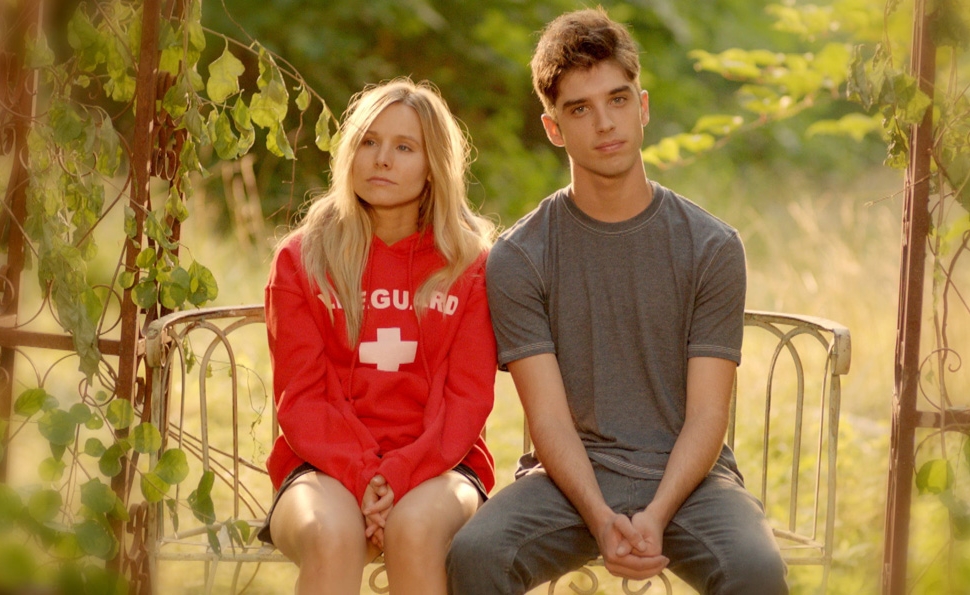 No points for guessing who’s (metaphorically) drowning in The Lifeguard, a sensitive Sundance alumnus that employs mediocre indie-rock tracks as life preservers. At 29 years and 10 months—she spends half the movie denying that she’s 30—New York journalist Leigh (Kristen Bell) has chosen to have her mid-life crisis a decade early, in the wake of her boss/lover (Sendhil Ramamurthy) getting engaged to somebody else, and the utterly depressing conclusion of her latest news story. On impulse, she packs a suitcase and her cat and drives to her parents’ house in Connecticut, reconnecting with her old friends Mel (Mamie Gummer), who’s now the assistant principal at their former high school, and Todd (Martin Starr), a chronic closet case. She also resumes her old job as the lifeguard at a ritzy condo’s pool, providing her with an ideal vantage point to watch other folks join her in treading water. Excitement does arise, however, in the form of a decidedly illegal affair with a restless 16-year-old hunk (David Lambert).

In muddled fashion, The Lifeguard simultaneously does and doesn't recognize how fucked-up that relationship is; it engineers a heated moral reckoning with Mel (the kid is one of her students) that’s speedily resolved with no real consequences for anybody. Bell is too inherently sympathetic to turn Leigh into a credibly flawed protagonist, and first-time writer-director Liz W. Garcia seems more interested in indulging the fantasy of the jailbait fling than in seriously interrogating her heroine’s psyche.

Likewise, the film’s B plot—it’s clear that Garcia has worked extensively in television—sees Mel growing increasingly unhappy with her raging tool of a husband (Joshua Harto), only to abruptly realize later that she’s just frightened of impending motherhood. The Lifeguard doesn’t shy away from underage boning or frank talk (SEE! Meryl Streep’s daughter ask a guy to slap her face with his dick!), but repeatedly declines to genuinely grapple with its characters’ pain, frustration, and bad behavior. There’s one shocking exception, involving a friend of the teen hunk who wants to pack his buddy off to Vermont, but even that bounces off Todd’s unacknowledged homosexuality in a way that’s slightly disturbing.

Even if it had the courage of its convictions, however, The Lifeguard would still be hampered by its commitment to cliché. As a director, Garcia gets some strong performances from her actors. Gummer, in particular, gives Mel some rich shading, suggesting a reformed wild child now cowed by her position of responsibility. But as a writer, Garcia constantly weighs them down with weak material, like Leigh’s monologue about her unstated yet blatant identification with a juvenile tiger that died of malnutrition after being locked up in a New York apartment. (At least it’s a tiger rather than the usual caged bird.) And no movie in recent memory has been so aggressively, annoyingly slathered with cut-rate college-radio tunes. After a while, it’s hard not to bust out laughing at each new jangle-inflected montage, and the movie’s big question becomes not whether Leigh will finally find a renewed sense of purpose, but whether this latest band drowning out the dialogue is trying harder to be Sunny Day Real Estate or Built To Spill.