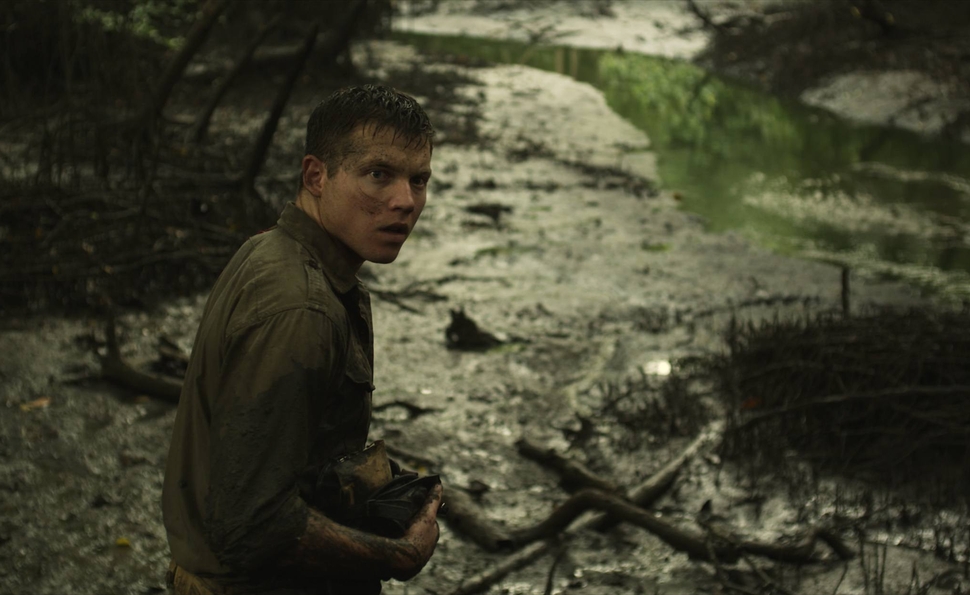 Aaron Wilson’s Canopy joins a growing list of films as disparate as Hugo and Waltz With Bashir that exist to engage with one of the fundamental questions of the digital age: How do we represent the past in a world that’s increasingly deprived of the memories and tools with which we first committed it to history? While nowhere near as essential as Martin Scorsese’s tribute to early cinema or Ari Folman’s soul-searching return to the Lebanon War, Canopy is nevertheless a fascinatingly ascetic addition to this subgenre, albeit one that’s more interesting to reflect upon than it is to watch.

A humble hybrid between The Thin Red Line and Gravity, Canopy fully embraces the challenge of making a low-budget World War II film, distilling Australia’s involvement in the Pacific Theater into the plight of one unfortunate paratrooper. The story could hardly be simpler: An Australian soldier named Jim (Khan Chittenden) plunges into the verdant heart of a war-torn jungle, his chute tangled in the treetops above the battle he was intended to fight. Disoriented and separated from his unit, the fresh-faced young man quickly changes his mission from victory to survival. It doesn’t take long to unknot himself from the branches (dismantling early fears that Canopy is just a riff on 127 Hours) and drop down to the mud, aimlessly crawling toward a safety that may not exist. When night falls, he encounters a lone Chinese-Singaporean soldier named Seng (Mo Tzu-yi). As the jungle grows darker and Japanese troops start closing in, Jim and Seng are forced to rely on each other, their mutual alarm giving way to a silent bond that broadly reflects the open relationship between their respective countries.

Wilson is stingy with context: Onscreen text locates viewers in Singapore on February 9, 1942, but pointedly neglects to unpack the significance of that date with regard to the Allies’ failed campaign to prevent Japanese forces from occupying the island nation. Instead, Canopy sets its scene via a steady flow of ambient information, opting for visceral immediacy rather than historical specificity. Capitalizing on the extent to which sounds are cheaper than visuals, Wilson relies on its pronounced soundscape to hint at the carnage Jim and Seng are so desperately trying to elude. (The smattering of aerial combat shots that appear during the prologue exude a painterly beauty, but the candied CG with which that look is achieved casts a long shadow of artifice over the film that follows.) Although shot on location in the jungles of Singapore, the micro-verisimilitude of the close-up shots in which Jim and Seng slink through the mud, unchanged since it was the turf of a deadly battle, clashes with the film’s insistent attempts to hint at a bigger picture.

Stefan Duscio’s cinematography, with its mesmerizing focus on the interplay between dense foliage and blinding sunlight, is so transparently indebted to the films of Terrence Malick that it exposes just how overused that comparison has become. But where Malick exploits beautiful images to capture the divinity suspended between them, Wilson’s approach cleaves closer to the work of Apichatpong Weerasethakul and Tsai Ming-liang, probing deeper and deeper into a single focal point until the periphery of the frame goes dark, and everything beyond it is forgotten.

Canopy most convincingly creates the illusion of war when it narrows its eyes on the two men trying to endure it, and the urgency on their underlit faces is more transportive than the canned sounds of mortar fire. Mo and Chittenden’s nearly silent performances are expressed through a Bressonian focus on gesture; Wilson evokes All Is Lost in his staunch, almost gimmicky refusal to use dialogue in a scenario where it might endanger the characters or expose them as dramatic constructs. Every time Wilson punctuates the silence with a sudden smattering of gunfire or an orchestral excretion of suspenseful chords, the effect doesn’t complete the tableaux of combat so much as it confirms the uncrossable divide between history and our attempts to remember it.

Canopy is hardly great entertainment (Jim and Seng’s interactions could have been much more exciting without jeopardizing the film’s form), but the fastidiousness of Wilson’s analog technique adds a fascinating dimension to the obvious fakery of his digital tools. The movie is almost entirely wordless, but it also unfolds like a spirited conversation between André Bazin and Jacques Rancière. The former argues that Canopy illustrates The Myth Of Total Cinema, while the latter contends that the film reaffirms, “There is no appropriate language for witnessing.” Their ideas have more merit than can be unpacked here, but Canopy—if nothing else—resolves as a fierce reminder that film theory really comes alive when filmmakers put it to the test.