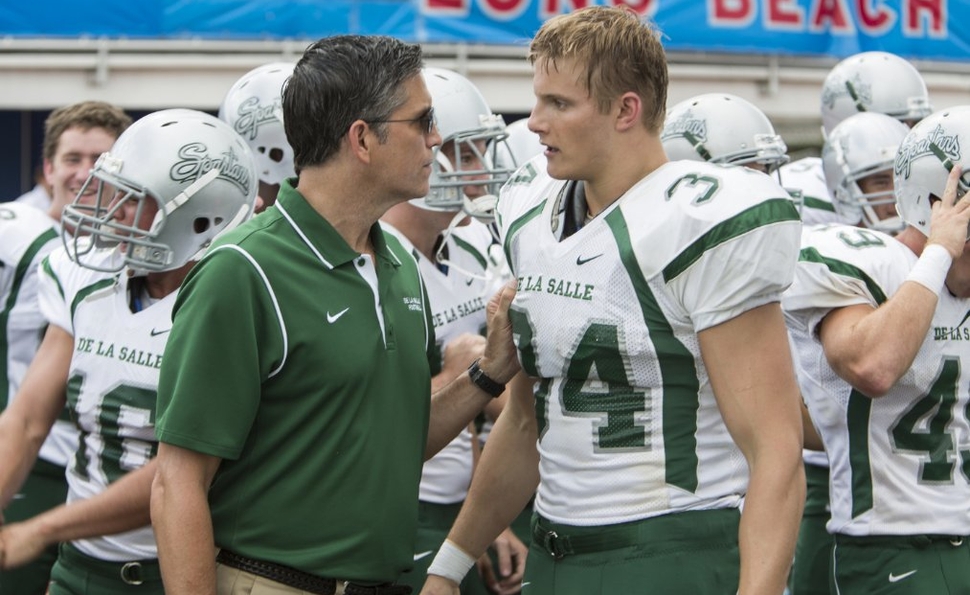 When The Game Stands Tall

Jim Caviezel is the current. Jim Caviezel is the gentle breeze. Jim Caviezel is at peace. To quote John Goodman in The Big Lebowski, he’s “calmer than you are, Dude. Calmer than you are.” As Bob Ladouceur, the inspirational coach who led De La Salle High School in California to a record 151 straight victories, the only thing that rattles him is the word “streak.” If any player boasts about the streak, or talks about starting a new streak, or if the fans chant “Streak! Streak! Streak!”, a twitch cracks Caviezel’s serene façade. He will not stand for such vulgarity. He doesn’t care about winning, much less the statistical anomaly that has etched De La Salle’s name in the record books. He’s all about turning these boys into men. He’s all about playing the game the right way. And other such sports-talk bromides.

By now, we’re used to seeing this from Caviezel, who specializes in playing the eye of the hurricane, the placid center of movies like The Thin Red Line and The Passion Of The Christ. But there’s a consequence to that: He can be the most boring actor on the planet. In When The Game Stands Tall, he’s playing a coach whose motivational techniques—and aggression in recruiting and developing players, which the film doesn’t trumpet as loudly—have led to season after season after season of gridiron victory. And while discipline and self-control certainly figure into Ladouceur’s teachings, there’s also a passion and drive that’s totally absent from Caviezel’s performance. It’s not that the film needs any more goosing—it’s broad and shameless even by inspirational-sports-movie standards—but its basic lack of plausibility starts with him.

As When The Game Stands Tall opens, Ladouceur and his boys have just logged their 151st straight victory after winning another state championship, but there are signs of trouble heading into next season. For one, the incoming seniors are a fractious bunch—“They don’t show their emotions,” frets Ladouceur’s assistant (Michael Chiklis)—and they show no signs of coming together as a unit. Their captain and star running back, Chris Ryan (Alexander Ludwig), is poised to break the state’s touchdown record, but his domineering father (Clancy Brown) would like him to seek individual, rather than team, glory. (Cue mildly disapproving Caviezel expression.) Meanwhile, Ladouceur’s son (Matthew Daddario), a wide receiver, keeps dropping passes, an up-and-coming talent (Jessie Usher) is arrogant, and Ladouceur himself is felled by a heart attack that keeps him away from summer practices. And that’s to say nothing of the telegraphed fate of an outgoing senior who’s accepted a scholarship at the University Of Oregon.

Obstacles? When The Game Stands Tall has a few. And on top of them, it even throws in a subplot about a runty 145-pound defender who’s never played a minute, and gives him the type of emotional payoff that Rudy spent two hours developing. (And unlike Rudy Ruettiger, the kid doesn’t have to wait for garbage time to come in the game.) Director Thomas Carter, who pushed these same buttons in 2005’s Coach Carter with Samuel L. Jackson, cloaks De La Salle’s setbacks and achievements in a Christian context, so however they might question God’s will in the valleys, they can praise His divine plan on the peaks. When Ladouceur gets offered a contract to coach for a major college, it gets treated like a scene from Faust. That’s how goody-two-shoes this movie is.

Despite the presence of expository play-by-play announcers—a problem even in great sports dramas like TV’s Friday Night Lights—Carter spends enough time on the games themselves to give the film some pockets of tension and excitement. And he does include one scene where Ladouceur and his assistant face the objections and accusations of league rivals who believe De La Salle has an unfair advantage. But When The Game Stands Tall mostly sticks to the idea that moral character and determination, rather than talent and tactics (and scheduling), explain why Ladouceur and De La Salle succeeded on such an unprecedented scale. That strain of magical thinking is a curse to sports—and to movies about them, too.