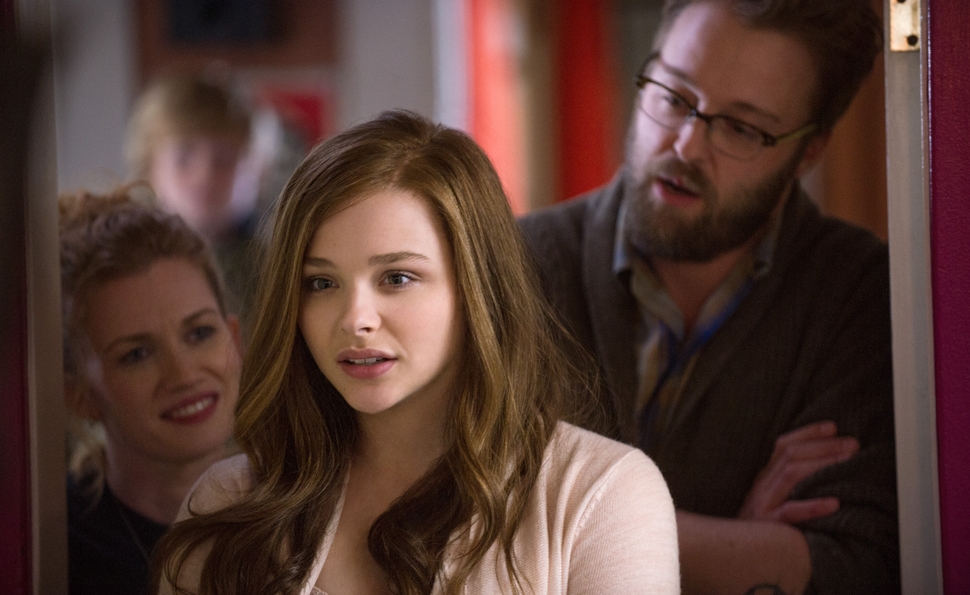 A YA sensation published in 2009, Gayle Forman’s If I Stay became the subject of a lot of “next Twilight” buzz once its film rights got picked up and Twilight’s Catherine Hardwicke was announced as its director. (She dropped out in 2010.) Though the novel inspired a sequel called Where She Went, the Twilight comparisons seem strange based on R.J. Cutler’s adaptation, which tells a self-contained story with a supernatural gimmick, but one far humbler than sparkly vampires or six-pack-sporting werewolves. Chloë Grace Moretz plays Mia Hall, a shy Portland teenage cellist who, as the film opens, is home on a snow day, waiting to learn whether she was accepted into Juilliard. Rather than watching her hover all day, anticipating the mail, and moping after reading about the recent success of the band featuring her estranged boyfriend Adam (Jamie Blackley), her parents suggest she and her brother Teddy (Jakob Davies) join them for a drive, despite the inclement conditions. This turns out to be an awful idea.

After a horrific accident, Mia wakes up beside the wreckage. Only she doesn’t: Walking around the crash site, she sees her own body as it’s placed on a stretcher, and watches as EMTs care for her other family members. She soon realizes she’s in a coma, able to watch as life goes on, but unable to do anything. Or maybe she can. As one nurse (Aisha Hinds) whispers in her ear, “If you live, if you die, it’s all up to you.” On that medically dubious conceit hangs the film. Caught in metaphysical limbo, Mia struggles to find reasons to live as she learns the fate of her loved ones. Meanwhile, the film flashes back to her life before the accident: her childhood spent with dad Denny (Joshua Leonard), who abandoned his rock band to raise his kids, and former Riot Grrrl mom Kat (Mireille Enos); her recent romance with Adam, a handsome brooder with the requisite troubled past.

The trouble with If I Stay is twofold: Remove the supernatural elements, and there’s little to make the story compelling. It’s essentially another nice-girl/bad-boy (but not really bad) romance with a few expected ups and downs, and little of the chemistry needed to bring it to life. Moretz seems a little bored in such a straight role, and Blackley doesn’t do much to elevate his part above cliché. The best elements reside on the margins: Leonard and Enos make a convincing pair of aging rebels, Stacy Keach has some tender moments as Mia’s grandfather, the soundtrack is loaded with good songs (even the fake band’s music is pretty strong), and Cutler, who took over the project after Hardwicke and Brazilian director Heitor Dhalia each left it, makes nice use of its Pacific Northwest setting. An executive producer of the TV series Nashville, Cutler is otherwise best known for his documentaries The September Issue and A Perfect Candidate. He brings a handsome competence to the film, but little flair.

The bigger problem: Even with the supernatural elements, If I Stay is never particularly compelling. For all the nurse’s talk about making a choice, Mia never seems all that conflicted. She acts as a passive observer in her own life, both before and after the accident. A couple of trips down a hallway with blinding light at one end aside, she mostly just hovers around the hospital. She’s a timid character in a timid film that unavoidably brings to mind the recent teen weepie The Fault In Our Stars. There’s nothing here as disastrous as that film’s Anne Frank House sequence, but nothing as bold, either, or as affecting as Stars’ best scenes, which match a sense of teen passion to an equally palpable sense of loss. If I Stay offers thinner versions of both, and it’s hard to care about the fate of characters who never seem particularly alive in the first place.