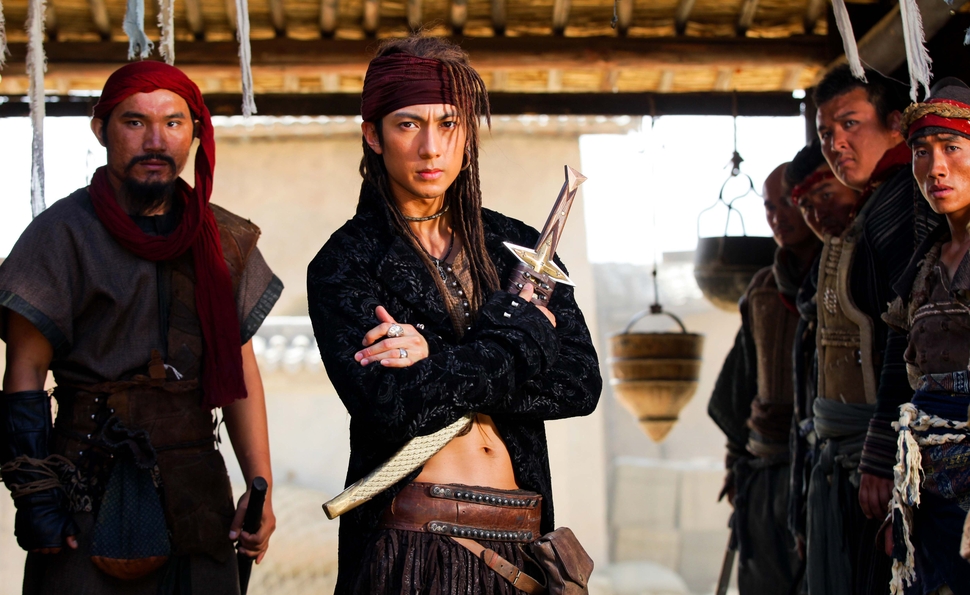 If the movies have taught us anything, it’s that you should never fuck with Donnie Yen, or try to understand the madness or machinations of Harvey Weinstein. 14 Blades is the rare film that indelibly imparts both of those lessons. For fans of Asian genre films, Weinstein has been both a blessing and a curse: He acquires titles that other distributors wouldn’t touch, then often sits on those titles for years before dumping them into a handful of American theaters. What possessed The Weinstein Company to jump on the rights to 2010’s 14 Blades is as much of a mystery as why it waited until now to release it; surely there must be a reason, even if it isn’t a good one. Perhaps Weinstein was tickled by director Daniel Lee’s pedigree—he’s been an internationally known quantity since his 1996 Jet Li vehicle, Black Mask—or compelled by the cartoonish exoticism of his recent historical epics. After all, the only other director to have worked with both Li Bingbing and Michael Biehn is Michael Bay, and audiences can’t get enough of that guy.

But here we are, staring down the barrel of a slipshod action spectacle, four years after the expiration date of a movie that wasn’t fresh to begin with. Wu xia films, beloved around the world for their operatic combat and lush dashes of fantasy, have never been especially well known for the clarity of their plots. Repurposing Chinese history as a bottomless reservoir of soapy pathos and gravity-defying combat, the best examples of the form transmute their swordplay into a uniquely expressive force that marries the high-stakes melodrama of a Chekhovian duel to the nimble precision of a Harold Pinter-esque tête-à-tête.

But not even the most garbled Tsui Hark joint is as unintelligible as 14 Blades, a film that’s lost in its own backyard. So needlessly convoluted that it makes Last Year In Marienbad feel like Gerry, 14 Blades almost immediately departs from coherence, beginning with an extended prologue that uses familiar genre tropes as a substitute for competent storytelling. The avalanche of murky information kicks off with an introduction to the Jinyiwei, a dangerous, clandestine band of henchmen who serve the emperors of the Ming Dynasty, terrorizing court officials and civilians in order to secure the emperor’s power. When the film begins, the leader of these “brocade guards” is a stoic killing machine named Qinlong (the legendary Donnie Yen), the man entrusted with the Jinyiwei’s notorious 14 blades: eight used for interrogation, and six reserved for execution.

It’s all well and good until—in an underlit whirlwind of political intrigue that squeezes all the confusion of a John le Carré novel into three minutes of screen time—a eunuch frames Qinlong in a conspiracy to steal the Imperial Seal. Apparently that’s really bad, because before you can say “close-up of Donnie Yen gasping,” the leader of the Jinyiwei is a fugitive of the law, on the run from his own men. Wounded and desperate, Qinlong encounters a random girl named Qiao Hua (Vicky Zhao) and takes her hostage as he makes his way across the country. What happens next is hard to say. A lot of people get stabbed, one dude cow-tips a horse, there’s a guy called “The Judge of the Desert” (Chun Wu) who looks like he fell out of Final Fantasy X, and Donnie Yen literally slaps down a band of ruffians with his left hand while feeding himself a chicken wing with his right. Peace is restored to the kingdom and they all live happily ever after, except maybe for the horse.

Most wu xia movies dazzle, and some can make their audiences levitate along with their characters. 14 Blades belongs to that tragic subgroup that fails to accomplish the former, and doesn’t even bother trying for the latter. The fact that Qinlong isn’t a person so much as a vaguely sentient sword is hardly a fatal problem; Yen is a uniquely gifted performer whose raw physicality can bring as much life to a folkloric character called “Iron Monkey” as he can to a rich historical figure like Ip Man. Unfortunately, Lee’s film seldom settles in to the talents of its leading man, and it incessantly complicates Qinlong’s arc instead of letting Yen punch through it. Qinlong is supposedly a villain who discovers his humanity, but even that simple bit of growth is lost in the muck of political nonsense and bargain-bin CGI.

Ultimately, the lackluster fight scenes are what make 14 Blades a disposable addition to the wu xia world. Lee’s old-school approach has its charms. His affinity for zooms and his overindulgence in stutter-step slow-motion is a clear show of respect for the genre’s golden age, but such nostalgia is gutted by the film’s terrible (and liberally applied) digital flourishes. The two visual approaches mix as seamlessly as the humans and cartoons in Mary Poppins, and the inelegance of Lee’s choppy compositions only makes the problem worse in his attempts to mask it. Kate Tsui is alluring as a witchy femme fatale, but the visual manifestation of her power—the ability to manipulate a jacket made out of garbage CGI—robs the character of her magic.

It goes without saying that Yen’s charisma hasn’t been completely snuffed out. Shallow pockets of his pure appeal are slipped in here and there, and may be enough to appease completists. Ultimately, however, from the misuse of its leading man to its misfire of an international release, 14 Blades amounts to little more than a movie about history that’s learned precious little from it.