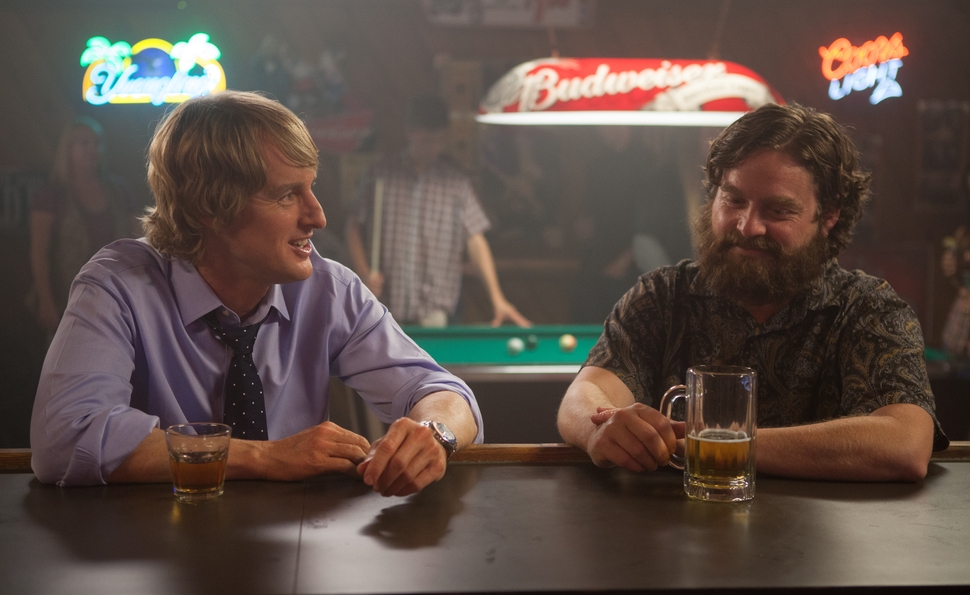 When David Chase, fresh off The Sopranos, made his feature directorial debut with the often-remarkable Not Fade Away, the film sometimes felt as if he was trying to squeeze several seasons’ worth of story into a couple of hours. Once a member of Chase’s writing staff, Mad Men creator Matthew Weiner has the opposite problem with Are You Here. A film about a couple of lifelong friends in the midst of parallel identity crises, it’s almost shockingly formless, underthought, and visually indifferent given those behind it, including Weiner and a handful of key Mad Men crew members, like director of photography Christopher Manley and production designer Dan Bishop. Until a beautifully staged but too-late final scene, little separates this from any other plot-light, quirk-heavy indie comedy with a handful of name stars.

What life Are You Here (formerly You Are Here) does possess comes from those stars, particularly Owen Wilson and Zach Galifianakis, a theoretically inspired comedic pairing. (They should probably call this a mulligan and demand a second shot as a team.) Wilson plays Steve Dallas, an Annapolis, Maryland weatherman who opens the film explaining to a succession of women, at least one of them a hooker, why he couldn’t be happier about his rootless existence. “I wanna do something and I do it,” he explains, but his body language suggests he’s overcompensating, and the way his credit card keeps getting declined suggests his lifestyle is about to run out of gas. Steve’s only friend, and his friend since childhood, is Ben Baker (Galifianakis), a jobless, possibly unstable stoner deeply concerned about the state of the Earth, and in the middle of composing some kind of manifesto.

When Ben learns his father has died on his Pennsylvania farm, Ben and Steve hit the road for the funeral. There, they meet up with Ben’s disapproving sister Terri (Amy Poehler) and Ben’s much-younger stepmom Angela (Laura Ramsey). Soon, Ben discovers he’s inherited much of his father’s considerable estate, Angela having asked to receive nothing. The death forces everyone to consider what really matters: Does Steve really want to keep getting high and bedding everyone in his orbit? Will Ben use his new fortune to save the Earth through a series of harebrained schemes, or seek help for his unaddressed mental issues? Will Terri be able to find happiness even if she can’t conceive a child?

This last question falls by the wayside fairly quickly, but then, everything not directly related to Steve and Ben’s happiness gets pushed to the margins of Are You Here, especially the concerns of women. This is most evident in Angela, whom Ramsey struggles to turn into a real character from a script that mostly positions her as a cryptic but effervescent force of life. When she and Steve start to question whether they have feelings for each other, the scene makes little sense. Steve has never stopped behaving like a leering asshole around her, and Angela barely seems human. (Then again, it’s hard to sound human when handed lines like, “I can’t sell you on life.”) Their romance, if that’s the right word, powers much of the film’s low-voltage plot, which makes the back half of Are You Here a minor ordeal.

The first half isn’t much better, but at least it has some inspired comic moments, most courtesy of Wilson, who has fun playing a man living just above squalor. Joining Ben and Terri for a dinner to at Outback Steakhouse after the funeral, he asks, “Are you sure nobody wants any wine? I got the best one on the laminate.” It’s fun to watch his shamelessness, and it might be illuminating to watch him change his ways if Weiner made his evolution the least bit believable, or even invested it with a fraction of the thoughtfulness evident on Mad Men. Weiner might have a great movie in him yet, but Are You Here suggests his true talent lies elsewhere.