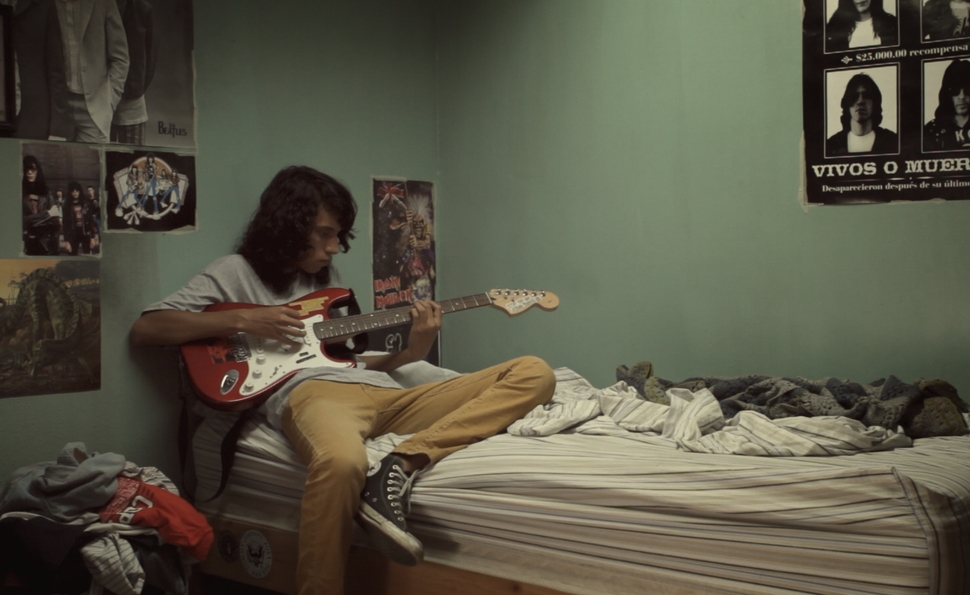 We Are Mari Pepa

Not three months after the U.S. release of We Are The Best!, a Swedish comedy about a group of teen girls who form a punk band, here’s We Are Mari Pepa, a Mexican comedy about a group of teen boys who form a punk band. These dudes, several years older than their Swedish spiritual sisters, are a crude hormonal bunch. Their band name combines marijuana and the female anatomy (because why just pick one?), they catcall women on the street mercilessly, and their single song contains a refrain about doing something nasty to a mysterious Natasha, “because I love you.” It’s hard to watch them and not recall Lena Dunham’s remarks on young males learning their bedroom tactics from porn: “There’s no way any teenage girl taught you and reinforced that behavior.”

But like the big-dreaming loners of Superbad, the four members of Mari Pepa mostly talk a game they can’t walk. When not banging their instruments, they bumble through Guadalajara playing basketball, dodging relatives, and going to parties where other, better musicians play. The most ambitious thing on the minds of Mari Pepa is learning a second song so they can compete in a battle of the bands, but even this task seems barely to occupy their attention, and rehearsals devolve into shouting matches. Tensions run especially high when the bassist brings a girl to practice and, after hearing they’re a punk group, asks if they know any One Direction.

The film is fitfully amusing but a bit too shapeless, even for a story about slackers. Ideas are floated, then dropped, like when one of the bandmates appears to have a Narco cousin, or when a character who needs money attends a training seminar for selling herbal supplements. Camcorder footage is thrown around fleetingly in between steadier shots, and there are several nostalgic montages that feel unearned, but nothing lends itself to a consistent style.

The second half narrows in on guitarist Alex (Alejandro Gallardo), a lanky and nearly mute individual who lives alone with his increasingly debilitated grandmother. In the movie’s best scene, the grandma, listening to a radio sermon that warns against the evils of satanic metal music, exorcises her house of all Alex’s rock paraphernalia. But when he discovers what she’s done and goes looking for her, the scene takes a sharp left, forcing him to be a responsible young adult for once. Director Samuel Kishi says he made the film as a tribute to his grandmother; this scene is the only moment that rings true to that proclamation.

Alex is a blank slate of a character, but the nastiness of his friends can be a turnoff. Though the unchecked obscenities and obsessions with sisters and mothers will no doubt ring true to current and former teenage boys, there’s something about watching these guys hoot so loud that feels icky in a “that’s what we looked like?” kind of way. And this is the big difference between Kishi’s film and Lukas Moodysson’s superior one: When the adolescent girls in We Are The Best! play punk, it’s a means of empowerment in a world that’s out of step with them. When these horny guys in their late teens play punk, it’s a side gig.