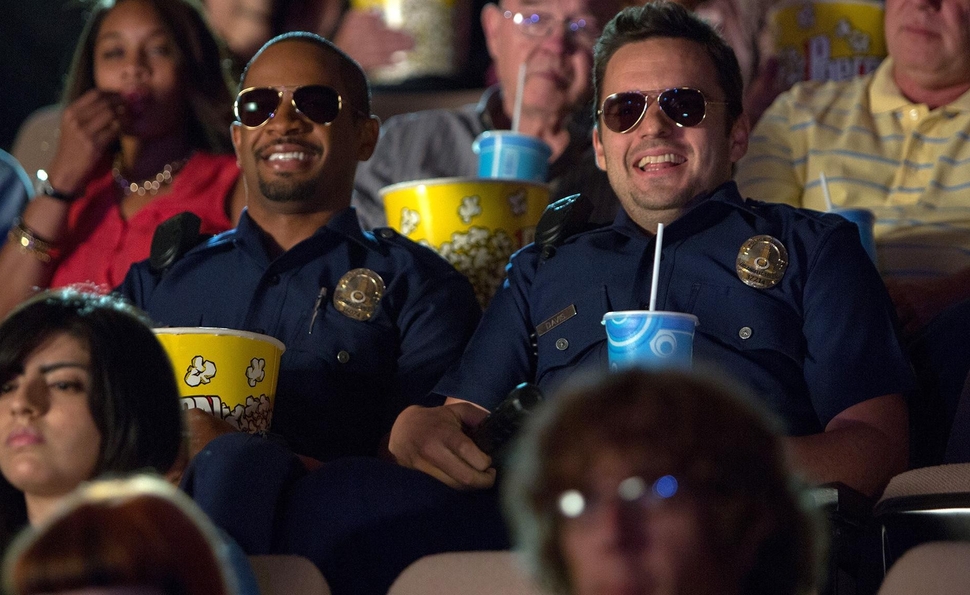 There are a hundred directions Let’s Be Cops could have taken with the clever premise of a pair of disgruntled Ohio transplants in Los Angeles who realize that wearing police uniforms gives them the power and status they crave, and decide to spend months impersonating police officers, even after becoming aware of the disastrous consequences should they be caught. It might have been spun into a transgressive social satire that let audiences vicariously experience abuse of power in the name of liberating, naughty fun. (Think a darkly comic twist on Bad Lieutenant.) Alternately, it could have been the basis for a dark psychological thriller about how slipping on the uniform can tap into a latent, dangerous lust for abusive authority. Instead, Let’s Be Cops takes its premise in the dullest, most predictable direction imaginable, as a wacky mismatched-buddy-cop movie pitched to the lowest common denominator. The uniforms, badges, and car are fake, but the lazy clichés and dumb tropes are real, and really stupid.

New Girl co-stars Jake Johnson and Damon Wayans, Jr. star as Ryan and Justin, best friends and roommates who have reached age 30 without much to show for it. Ryan, an out-of-work actor, seems to spend most of his days hanging out with local children, while Justin is perpetually frustrated in his job as a videogame designer. Then one night, these emasculated husks of men attend a masquerade dressed as cops, and discover that wearing the uniform transforms them from zeroes to heroes, from men with no authority to men with the power of the law behind them. With nothing else to distract him, Ryan throws himself into the charade, buying a police car, egging on his milquetoast friend, and in perhaps the film’s only mildly clever running gag, constantly giving himself promotions until he reaches the rank of detective—in his own myopic mind, at least.

Ryan is also something of a nut-job, a madcap figure of anarchic tomfoolery, the Belushi of the pair—though in this case that would be K-9 star James Belushi. Being a fake cop taps into Ryan’s borderline-psychotic power fantasies, and throughout the film, he behaves in ways that are dangerous, creepy, and flagrantly illegal, and seem to belong in a movie much darker and more daring than this one. Let’s Be Cops has a premise of Observe And Report-level audacity wasted through sub-Paul Blart: Mall Cop execution.

Let’s Be Cops loses interest in its premise almost immediately. After five minutes or so of lame gags about confiscating pot to smoke it and making Russian gangsters twerk, the film essentially becomes a dire, run-of-the-mill buddy-cop movie. The guys doggedly pursue a big case, complete with an Eastern European bad guy whose only distinguishing feature is his resemblance to Terence Stamp in Superman II and an obligatory love interest in the form of Josie (Nina Dobrev), a humble waitress who dreams of becoming a makeup artist, and takes a shine to Justin. Keegan-Michael Key rounds out the cast in the Joe Pesci role of the zany criminal who becomes the partners’ unwitting sidekick.

The dark wish-fulfillment elements of Let’s Be Cops are undercut by a sophomoric script demanding that 80 percent of the people these faux-cops encounter treat them like nobodies who can be physically and verbally abused with impunity. The film gets particularly ugly in sequences where Justin has a close encounter with an obese, sweaty naked man (hello, Borat), and a scene where Justin, our hero and the most reasonable member of the duo, kicks a large woman in the groin after she boots him first.

Wayans is likable and appealing in a role that requires his smart character to do things like Googling “impersonating a police officer” to find out, that, yes, impersonating a police officer is a serious offense. This should be something everyone knows, especially someone who has just designed Patrol Man, a videogame that gives players an unprecedented, once-in-a-lifetime opportunity to play a cop in a videogame. (There are no limits to the film’s incredible lack of imagination.) Let’s Be Cops doesn’t just fall short of the standards of the elder Wayans’ Last Boy Scout; it falls short of the elder’s Bullet Proof. It’s a laughless waste of a great idea, with bad-taste gags that are ambiguously sexist, racist, and homophobic, but unambiguously unfunny. Anyone who has reached the age of puberty—or is even in the ballpark—is already far too old for this shit.