Op-ed: A dire warning for the planet Comic-Con 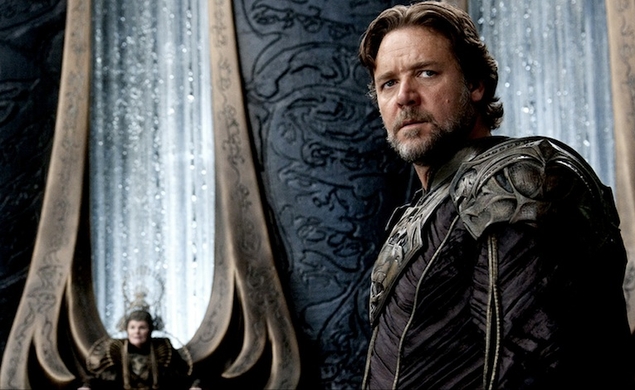 In every version of Superman’s origin story—up to and including this summer’s Man Of Steel—there’s a scene where Jor-El, Superman’s father on Krypton, warns the leaders of his planet that their world is headed for a disaster of biblical proportions. Real wrath-of-God-type stuff: fire and brimstone coming down from the skies; rivers and seas boiling; dogs and cats living together; mass hysteria. Jor-El, Krypton’s greatest scientific mind, points to mountains of evidence. The High Council, Krypton’s greatest morons, dismiss him. “Pish posh! Everything is fine! What could possible go wrong?”

Watching San Diego Comic-Con from afar last weekend was a bit like being the one guy in that High Council chamber who hears the ominous tremors and rumbles of thunder. While Hollywood and the press assembled to get each other hyped up about their upcoming projects, the few movie journalists not in San Diego were writing about this weekend’s box office, where not one but two expensive comic-book movies were simultaneously tanking. The juxtaposition couldn’t have been more striking. Pure, unbridled enthusiasm about the future of comic-book movies on Planet Comic-Con, and a dire warning about the future of comic-book movies on Planet Earth.

In the New York Times, Brooks Barnes covered a streak of no fewer than six high profile summer flops, including The Lone Ranger, After Earth, and last weekend’s R.I.P.D., while noting that amid a glut of indistinguishable behemoths, “audiences have repeatedly made hits out of smaller films this summer.” R.I.P.D. and its $130 million budget were beaten at the box office by The Conjuring and its $20 million budget; Now You See Me has grossed almost twice as much as After Earth, which cost almost twice as much to make.

Meanwhile, at the Daily Planet Los Angeles Times, Steven Zeitchik predicted that this summer could lead to a rise in “targeted movies;” more specialized films for specific audiences (like The Conjuring) and less ultra-generic films aimed at the widest possible audience (like R.I.P.D.). Calling this “the summer of the B-movie,” Zeitchik said that even in a world where international box office is king, there is still “a real and potentially significant trend” toward targeted movies, where people are looking for entertainment that’s “a little smaller and made for us—whoever that might be.”

That’s not the future that was on display at Comic-Con, where no one apparently got the memo about targeted movies or turning smaller films into hits, and where the barrage of announcements resembled a nuclear arms race; an industry-wide battle to determine who could cram the most superheroes in a single film. Hopefully the end result isn’t mutually assured destruction.

DC has Zack Snyder working on a Batman/Superman movie for 2015. Marvel has both Guardians Of The Galaxy (basically The Avengers In Space) and a sequel to The Avengers, back with a bigger and more powerful cast, to face an Age Of Ultron. Quietly—or as quietly as possible for something with a nine-figure budget—Fox might have preemptively one-upped them both with 2014’s X-Men: Days Of Future Past, which reunites almost every single character who has appeared in any of the X-Men movies. The cast photo from the movie’s Comic-Con panel was wider than the step-and-repeat backdrop.

I’ve been reading comic books obsessively since I was 12 years old. If I was any more of the target for these movies, Hawkeye would have put two arrows in my back by now. But I worry about the future of these comic-book films. This summer’s box office suggests the winds are changing at the movies, and audiences are becoming less enamored of bigness. But comic-book movies, in their quest to compete with and outdo each other, are increasingly focused on bigness with Professor X-like mental intensity.

Recent reinterpretations of Krypton’s downfall blame the planet’s destruction on its citizens’ excessive exploitation of their precious natural resources. Mostly, they’re parables about global warming. But if the studios aren’t careful, we may look soon back at these movies as metaphors for themselves, willfully ignoring the warning signs until it was too late to do anything about it.