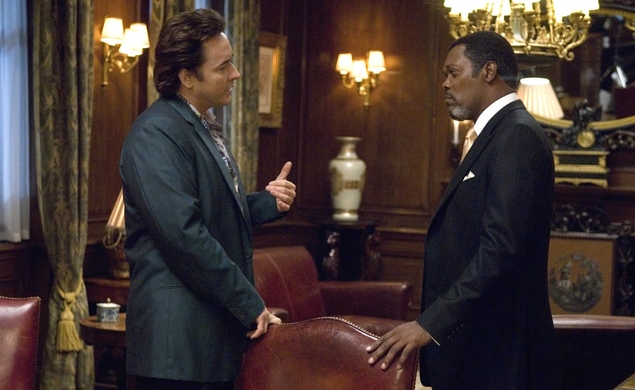 Saying John Cusack and Samuel L. Jackson co-starred in 2007’s above-average Stephen King adaptation 1408 isn’t exactly accurate: It’s more like they starred in one long scene together before Cusack got locked in the titular hotel room to battle supernatural evil and his own demons. Regardless, the one-time sparring partners are coming back together for an adaptation of King’s 2006 novel Cell, in which a mind-control virus is spread through mobile phones. You can see some conceptual poster art for the movie here, featuring the delightful tagline “There’s a future in technology. But not for us.” Sick burn, technology.

Cell was originally going to be an Eli Roth film, but the Hostel director eventually dropped out over what he described as disagreements with the Weinsteins about how to approach the material. According to Variety, the project now has a screenplay co-written by King (which would make for the first feature he’s written since 1992’s Sleepwalkers), with Tod “Kip” Williams of Paranormal Activity 2 set to direct. This will be Jackson’s second King adaptation and Cusack’s third. (He’s also in Stand By Me.)

In other Jackson news, American Banker’s Maria Aspan reported last week that the actor’s currently ubiquitous series of TV ads for Capital One attracted the ire of the conservative group One Million Moms. They objected to Jackson’s promise of credit card rewards “every damn day,” and now Capital One has replaced at least some airings of this version of the ad with one where Jackson more mildly promises rewards “every single day.” Capital One’s silent on whether it did so in response to complaints from One Million Moms, which has yet to figure out if the original version of the ad “will continue to air later in the evening on select, non-family, racy networks only.”