Op-ed: A study of two captains, in summer and fall 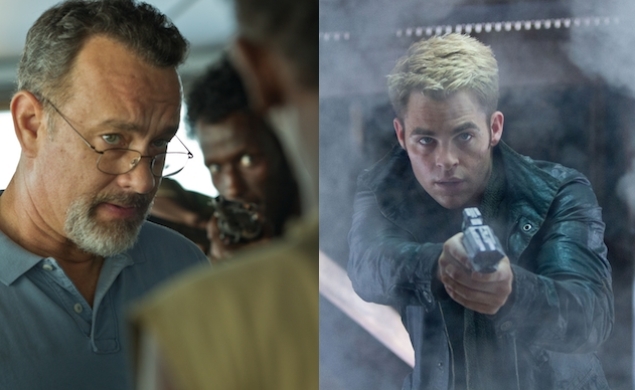 The following post contains major SPOILERS for Star Trek Into Darkness, Star Trek II: The Wrath Of Khan, and Captain Phillips, plus a few minor spoilers for Iron Man 3 and Man Of Steel.

Star Trek Into Darkness’ big emotional climax is an homage, a lift of a scene from Star Trek II: The Wrath Of Khan in reverse. In Khan, Mr. Spock sacrifices his life to save the Starship Enterprise and its crew. In Into Darkness, it’s Captain Kirk who dies so Spock and the ship can live. Spock’s demise in the old continuity stood for the rest of Wrath Of Khan and a big chunk of the next film, The Search For Spock. Kirk’s death in the new continuity lasts 10 minutes tops, as Spock captures Khan and Dr. McCoy uses the regenerative properties of his Cumberblood to revive the Captain.

Spock’s resurrection in Star Trek III was a once-in-a-lifetime happenstance—the lucky confluence of a unique piece of technology, a special planet, and some Vulcan alien mojo—but Kirk’s return in Into Darkness is even more of a deus ex mac-Khan-a. The film does its best to laugh off the conceit (“Oh, don’t be so melodramatic. You were barely dead,” quips McCoy), because to address it seriously would mean acknowledging what the film’s writers had done: rendered death utterly meaningless. It will be interesting to see how future Star Trek movies tackle this issue, because as it stands at the end of Into Darkness, seemingly no injury is truly fatal.

I was reminded of Star Trek Into Darkness last weekend while catching up with another movie about a brave captain and his crew, Paul Greengrass’ brilliant Captain Phillips. For all these films’ superficial differences—one is a lean historical drama rooted in real-world events, the other an epic sci-fi adventure—the two share a lot of thematic common ground. Both are action films about battles between captains in isolated and inhospitable environments. Both capture struggles between men at the mercy of enormous and unfeeling systems of governance and economics that are heavily influenced by wars on terror. Both movies’ protagonists are selfless heroes willing to sacrifice their own well-being for the safety of their crews. Both men nearly die, and miraculously survive.

I’m harping on STID, but looking back at the summer movie season, I see a lot of stuff that confuses epic spectacle for epic stakes. Iron Man 3 concludes with an enormous battle between Tony Stark’s army of armor suits and The Mandarin’s explosive soldiers. After watching Stark spend half the movie trying to fix just one suit of armor, he’s suddenly got dozens of them at his beck and call (and he doesn’t seem the slightest bit fazed when they get blown to smithereens). After learning that the Mandarin’s suicide bombers are actually unwilling war vets, he doesn’t make the slightest effort to save any of them, and orders his robo-minions to terminate with extreme prejudice. The stakes (Stark’s future, the moral implications of killing these soldiers) take a backseat to the spectacle (robots fighting human bombs). The resultant confrontation is great to look at and meaningless to think about.

Man Of Steel similarly trades emotional investment for stunning visuals. In that film’s big final battle, Superman squares off with the evil General Zod; their fight knocks down buildings, possibly killing unseen hundreds (thousands?) of innocent people. The film never dwells on any of them. Why? Because the scene is not about stakes (the lives at risk), it’s about spectacle (the awesomeness of seeing Superman punch Zod through a building at super-speed). To focus on the lives would complicate the movie’s deliberately simplistic pleasures. By the time director Zack Snyder tries to add a little humanity to the conflict, by putting a bunch of bystanders in Zod’s way and forcing Superman to make a tough decision, it’s too late. Why should we care about these three people when the movie’s disregarded 3,000 others?

It’s unclear why most summer movies have completely abandoned the concept of stakes in effects-driven storytelling, but that’s the thing that’s really distinguished this fall’s thrillers like Captain Phillips and Gravity. These aren’t navel-gazing contemplations of mortality; they’re full-bodied action films with incredible imagery, unforgettable action sequences, and hefty budgets. (Phillips cost $55 million; Gravity was priced somewhere in the neighborhood of $100 million.) Still, both would look wildly out of place in the summer, not because they’re cheap but because they’re small. Gravity focuses on two astronauts; most of Captain Phillips transpires between five men trapped in a tiny lifeboat. At every single moment in these fall thrillers we know exactly who is onscreen and what they’re doing, and most importantly, why it matters.

Summer movies, in contrast, thrive on chaos. The only motivation that’s relevant at any moment is the one that makes stuff explode. At a certain point, summer got conflated with bigness, and excitement became less important than sheer, enormous scale. But the most memorable entertainments do more than just overwhelm our eyeballs for 90 minutes, they engage our hearts and minds as well. We root for Luke Skywalker in Star Wars; we’re terrified for Chief Brody in Jaws and Agent Starling in The Silence Of The Lambs. We don’t just enjoy these movies, we care about their heroes. That’s what separates a great movie from a cool one.

The gulf between Captain Phillips and Star Trek Into Darkness—and the gulf between Captain Phillips and Captain Kirk—is a perfect illustration of this idea. Kirk dies and is reborn with seemingly no physical or emotional scars. A few scenes after dying horrifically of radiation poisoning, he’s ready to boldly go where no man has gone before again. That’s really cool! But it leaves viewers with no emotional connection to the character. What’s the worst that could happen to Kirk next? He dies more?

Phillips survives his ordeal as well, but unlike Kirk, who shrugs off actual biological death, the experience takes a heavy toll. In Captain Phillips’ final scenes, he boards one of the Navy ships that has come to his rescue, and receives medical attention from a doctor. Overwhelmed by relief and shock, he falls completely to pieces. The danger has passed, Phillips is completely safe, but he still can’t stop sobbing and shaking.

Phillips’ journey with the Somali pirates wasn’t some bullshit movie scenario. There’s no superhuman blood he can chug to make the trauma go away. Instead, Captain Phillips’ final scene shows that its hero will struggle with what’s occurred for a long time to come. And because Captain Phillips is such a smart film with such real stakes, we will too. Even survival has its price.