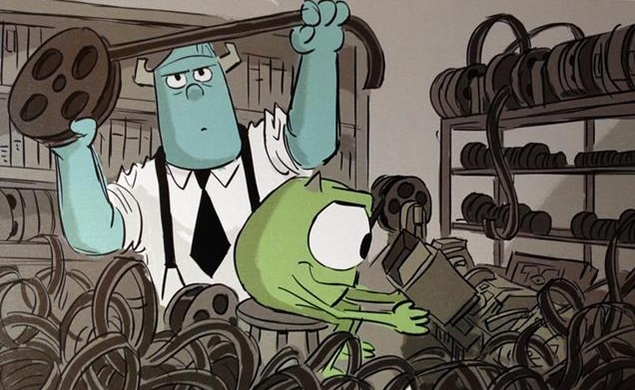 Through Screen International, Loach requested “25-30 rolls of dry transfer tape, 13mm wide, developed for Acmade Film Edge Numbering (or edge coding) machines.” Loach still likes to shoot on film and edit on a Steenbeck flatbed. “I suspect this will be the last film in this country edited this way, although people will still use the Steenbeck to view archive,” said his longtime editor Jonathan Morris.

Less than two weeks into post-production, Loach and Morris realized they would soon to run out of the tape, used to sync video and audio. Their request for more was answered by Pixar editors, led by cutter Steve Bloom. Screen reports that the editors at Pixar are all fans and have their own favorite Loach film, so it’s not surprising they sent over all 21 rolls of the numbering tape they had on hand. They also included a picture (see above) of Monsters, Inc. duo Mike and Sully in the editing room.

“We were delighted to know that Pixar is still in love with the same technology as us,” Loach said. “We hope to get to meet them along the way.” In the meantime, he sent back a photo mimicking Mike and Sully’s postures with his live-action editing team. With a final contribution of five rolls from editor Mary Finley, Jimmy’s Hall is now set for post-production. Known for politically charged dramas like the 2006 Irish War Of Independence drama The Wind That Shakes The Barley, the 77-year-old Loach is cagily hedging his bets on whether this will actually be his final feature. “I might not tackle another one on that scale again,” he’s said, “but I’ll keep making a bit of trouble from time to time.”