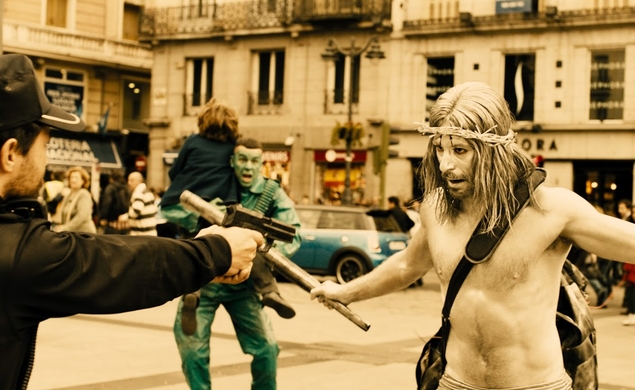 Yesterday was the last day of Spain’s fifth annual Fiesta de Cine, in which moviegoers register to purchase tickets at steeply discounted prices. 1.8 million people signed up for this year’s edition, and over the course of three days, they purchased tickets for €2.90 ($3.90) rather than the usual €11 ($15) for top draws like Gravity and the hit Spanish horror comedy Witching And Bitching (pictured above). The number of tickets sold was up a whopping 633 percent from the same three-day period the week before.

The Hollywood Reporter’s Pamela Rolfe reports that this year’s outstanding participation rates (up 98 percent from last year) have renewed local debate about whether high ticket prices are responsible for flagging sales, which have dropped 15.8 percent (about 34 million tickets) from last year. Many blame a 21 percent increase in the value-added tax (VAT) on ticket sales for this precipitous drop in sales, including I’m So Excited! director Pedro Almodóvar in a recent article echoing many complaints from the film industry claiming the government is trying to kill domestic movie production.

Almodóvar said the government has pursued a decadelong vendetta against filmmakers for their opposition to the 2003 invasion of Iraq by slashing funding for production and taking other destructive steps. “Spanish film has become the bête noire of the PP government,” he wrote. “The current cuts and contempt are the result of [the filmmakers’ “No War” stance], which I will never regret, even if not a single cinema remains open.”

Also dismayed by the government’s attitude toward the film industry: actor Elijah Wood, who spent five months last year shooting two entirely Spanish productions. “It amazes me how a government can mess up Spanish film—an art form that has come a long way, has spread around the rest of the world in the last decade, exploiting a moment of globalized cultural appetites.” he told El Pais recently. “It’s messing up years of work.”

Tensions between the government and Spanish filmmakers have been exacerbated recently by comments from Finance Minister Cristóbal Montoro, who blamed declining ticket sales on the “quality of the films” being produced, rather than tax hikes or other government-related factors. Given the concentrated surge of viewing activity, though, Witching And Bitching director Álex de la Iglesia argued on Twitter that this year’s Fiesta de Cine proves that “the vast majority of the public want to go to the movies, but cannot afford it.”