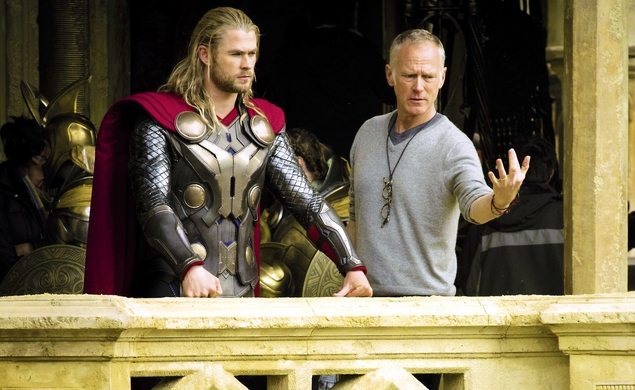 The following post contains vague SPOILERS for the mid-credits stinger for Thor: The Dark World. It’s nothing too specific, but if you want absolutely no idea of what’s coming, beware. (I mention the stingers in Iron Man and The Avengers, too, but c’mon, you’ve seen those movies by now, right?)

At this point, it’s as firm a trope of superhero films as capes, Spandex, and computer effects: All comic-book movies are required by nerd law to have at least one post-credits stinger to tease, in classic “To Be Continued!” fashion, the series’ next installment. Iron Man ends, then Samuel L. Jackson’s Nick Fury appears to talk to Tony Stark about joining “The Avengers Initiative.” The Avengers ends, then reveals Loki was a mere puppet in the schemes of the intergalactic menace known as Thanos. And so on.

Marvel’s next movie, Thor: The Dark World, opens in a couple of weeks, and naturally, it has a couple of stingers: one in the middle of the credits, and one at the very end. As you might expect, one of them is connected to Marvel’s upcoming movie Guardians Of The Galaxy, a space adventure starring a band of misfit alien heroes, directed by Slither and Super’s James Gunn. And Thor 2 director Alan Taylor isn’t particularly jazzed that it’s sitting there at the end of his movie.

The subject of the stinger came up in an interview with Bleeding Cool. Brendon Connelly asked Taylor what he thought of the scene, and the filmmaker replied that he hadn’t directed it and would like it known he’s “very happy not to take responsibility” for it (a phrase he repeated several times). Taylor continued:

“It’s a different tone. I would have shot it differently. But I think it’s cool that it reaches out and touches that other universe. That universe is coming. The Guardians universe is really cool and wacky… but that sequence in the credits, I would say, is the only part of the movie where I’m happy to give the credit away…”

When asked who directed the scene, Taylor didn’t want to point fingers, and denied Gunn was responsible. But when Connelly put the same question to Marvel President Kevin Feige, he made it clear Gunn had shot the Guardians stinger.

The production of The Dark World was met with rumors of strife between Taylor and Marvel, so this could just be another example of collaborators who didn’t quite see eye to eye. Presumably if you accept a gig directing a Marvel movie, you know that for all your creative freedom, you’re still at the mercy of the machine; your movie is going to have one of these stingers, end of story. (This isn’t the first time another director swooped in to supervise one of them either; Joss Whedon shot the stinger at the end of the first Thor, which was otherwise directed by Kenneth Branagh.) It’s hard to feel too sorry for Taylor. This stuff shouldn’t be a surprise.

But it’s still a little bit of a bummer. Some fans love the interconnected quality of Marvel’s movies—how they all fit together and flow seamlessly from one to the next. I think that approach can be fun, and has definitely paid off in some ways, but this example shows how it can be limiting, too. Even movies that don’t necessarily fit together, as Taylor claims Thor and Guardians don’t, are forced to commingle, sometimes uncomfortably. I wouldn’t call this situation a dark world, but at times it can be a disappointing one.