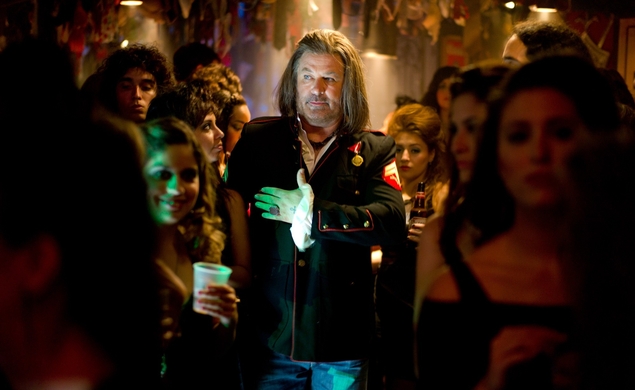 With 30 Rock wrapped and a new talk show on MSNBC, Alec Baldwin’s foreseeable future is mostly in TV. That seems fine with the actor, whose impatience with Hollywood film production has reached a fever pitch in recent interviews. Last night at the American Magazine Media Conference, he shared his thoughts on how increasingly derivative movies have become (“People’s lives are more interesting than what’s in the theaters”) and the types of films Hollywood is interested in making. (“They only want Spider-Man.”) But Baldwin’s headline quote came from his thoughts on last year’s hair-metal musical flop Rock Of Ages, in which he played a club owner. His description of the film? “A complete disaster.” Baldwin claims he could tell that the movie was going wrong fairly quickly. “A week in you go ‘Oh God, what have I done?’”

All of his recent interviews have been of the scorched-earth variety. Speaking to The Daily Beast’s Marlow Stern in an interview published yesterday, the actor claimed, “There are acres and acres of great scripts waiting to be produced, and armies of great actors to play these parts, but there aren’t many good directors.” He elaborated with an example from personal experience: “I did a film once where I saw the director polling the producer (who was a very famous producer), taking the star’s temperature, the writer who was famous who they sent in to polish the script, and the director didn’t have a point of view of his own. He’s there to find out, ‘Who’s the power in this room, and whose ass do I need to stick my tongue up on this film?’ And you think, ‘Oh no, not again.’” Conclusion? “You can’t make a good living making good films.”

In another recent interview with the Associated Press’ Jake Coyle, Baldwin shared more thoughts on the “fetid septic tank” of the film industry. There are some directors who give him hope: “Right as you’re about to collapse from a kind of cinematic starvation and dehydration, along comes [12 Years A Slave director Steve] McQueen. Along comes Alexander Payne. Along comes Wes Anderson. Along comes [Paul Thomas] Anderson.” He likes Gravity and Captain Phillips, but between the money people and the “ocean of mediocre directors,” he’s not feeling too optimistic.